Philosophers and Their World Trivia Quiz

Quiz Answer Key and Fun Facts
1. Which great philosopher was so slow to develop that he was called "The Dumb Ox" during his childhood?

Thomas was big for his age, and didn't talk much, but when he got started, he wrote some of the foundational philosophy of Catholic thought, by weaving Aristotle's logical and natural philosophy into the Christian theology.
2. Which philosopher was selected by a great king to be tutor to his son, who became one of the great conquerors of history?

Aristotle was Alexander the Great's tutor in the ancient Greek disciplines of art, rhetoric, philosophy. Funny that Alexander took such a military turn.
3. Although Jefferson banned this philosopher's work from the University of Virginia, which great philosopher was a major contributor to the Founding Fathers' understanding of the republican government enjoyed in the USA?

Jefferson thought Hume's "History of England" was full of "Tory poison", and that Hume's thinking was anti-federalist. Funny thing, though, is that Hume supported American independence all his adult life, and felt he was "an American in principle."
4. This great Jewish philosopher fled from Spanish and Portuguese oppression to the Netherlands to avoid trouble with the ruling class.

Spinoza was unappreciated in his time, and his great "Ethics" turned the philosophical world on its head, challenging both the medieval thought of St. Thomas and the new thinking of Descartes.
5. Which great philosopher taught on the Painted Porch?

The Stoic philosophy of Zeno is named after the Greek word for Porch--stoa. The area where Zeno taught was covered with famous frescos of real and imaginary scenes from Greek history and tradition.
6. Whose idea was it to use a razor to cut through the baloney in an argument, saying that the simplest hypothesis is likely the best one?

Occam probably never used the quotes attributed to him, and the idea was well-established by Aristotle, Ptolemy and Aquinas. But somehow Occam's Razor (or Ockham's Razor) stays as the famous quote.
7. Which two great philosopher-mathematicians both claimed to be the "father of modern calculus"?

Leibniz published his "Nova Methodus" first, but Newton's many treatises, published over time, were more popular with the scientific crowd of the day.
8. Which great German philosopher, author of "Being and Time," lived for many years in a small hut in the Black Forest?

Husserl was the father of phenomenology, and worked to understand the core of truth. Mann was an educator and philosopher in Germany, and "Thus Spake Zarathustra" was another Nietzsche creation.
10. Lillian Hellman and Leonard Bernstein wrote an operetta based on whose novel "Candide"?

Voltaire's satirical pen was never so sharp than when he was exposing the inconsistency and hypocricy of the ruling classes. Doctor Pangloss, Candide, and a cast of characters across two continents tells a great story! Jules Stein, of course, wrote great songs, but not for this play. Steinbeck and Gertrude Stein were great writers, but did not have Bernstein as a collaborator.
Source: Author wwtbam1

This quiz was reviewed by FunTrivia editor bloomsby before going online.
Any errors found in FunTrivia content are routinely corrected through our feedback system.
Most Recent Scores
Jan 29 2023 : GoodwinPD: 10/10
Jan 01 2023 : BABAKHUL: 5/10 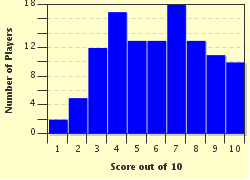 
Other Destinations
Explore Other Quizzes by wwtbam1