Here Are My Thoughts on the Subject Quiz

Here are ten famous philosophers who have had great influence on mankind. They come from many countries and lived at different times in history. Let's take a look at some of their thoughts.

Quiz Answer Key and Fun Facts
1. Which of these men is often given given credit for founding the Academy of Athens, one of the first institutions of higher learning in the western world?

The ancient Greek philosopher Plato was born circa 428 B.C. and was the student of the philosopher Socrates and the teacher of Aristotle. He is credited with creating the Academy in Athens and authoring many works called 'dialogues' which explored theology, cosmology, the philosophy of language and political philosophy. Platonism is a philosophical system that supports the existence of abstract objects which exist in a third reality. Plato also supported the idea that knowledge is a matter of recollection and memory as opposed to learning, study, or observation.
2. Which of these famous Scotsman wrote "A Treatise of Human Nature" (1739) and was known for advocating that desire rather than reason governed human behavior?

David Hume was considered one of the greatest minds of his time. He supported the idea that we gain awareness of good and evil by personal experience as opposed to the idea that all men are born with this inner knowledge. He was an 'intermediate' thinker in that he did not believe that man was all bad nor all good.

He believed in shades of gray as opposed to all things being black or white. He put forth the idea that the government has a duty to protect and enhance the lives of the governed, while at the same time the governed had the obligation to obey their government.
3. Which Russian-born writer is credited with being the founder of the philosophical system known as Objectivism as well as the author of the novel "Atlas Shrugged" (1957)?

Ayn Rand was a Russian immigrant to in the U.S. who witnessed the Russian Revolution and watched her family plunge from a high middle-class existence to utter poverty. Her childhood influenced her writings and philosophies as an adult. Her greatest novels were "Atlas Shrugged"(1957) and "The Fountainhead"(1943).

Her philosophy of Objectivism claim that certain things, especially moral truths, exist independently of human knowledge or perception of them. She espoused the idea of rational self-interest and believed that all reality is objective and external to the mind.

She supported the idea the knowledge is reliably based on observed objects and events.
4. Which of these Nobel Prize winning authors was known for his tenet known as "absurdism"?

French author and philosopher Albert Camus was known for his skills as an author and journalist as well as for his association with the philosophy of nihilism. This philosophy basically states that life is without purpose or intrinsic value. Many of his writings explore the idea of "absurdity" which is the human tendency to seek for the meaning of life without the ability to recognize it, even if it was found.

Born in French Algeria, Camus held the ideal that world powers would fall because of their worship and dependence on technology.
5. Which of these men is often described as the "Father of Classical Liberalism"?

Englishman John Locke was one of the most influential thinkers of his time. Contrary to the idea of innate ideas, which was popular at the time, Locke put forth that man is born as a 'tabula rasa' or 'blank slate' and that he learns through experience.

He believed in religious tolerance. He also believed that a ruler had the obligation to do what was best for his subjects but also to listen to their opinions. His philosophies were very influential on the ideals put forth in both the Declaration of Independence and the Constitution of the United States.
6. Philosopher and psychologist John Dewey was an educational reformer often associated with the philosophy of pragmatism.

Dewey was one of the first men to present the idea of pragmatism as a philosophical concept and supported the idea of Reflective Thinking. He believed that education is part of the social continuity of life. He believed the thought process to be a product of the interaction between an organism and its environment.

He believed in the equality of all men and believed that education should be available to all people regardless of race, gender, or social standing. He was a prolific writer who wrote on many topics other than philosophy, including art, logic, and social theory.
7. Which author and philosopher is known for his novel "Thus Spoke Zarathustra"?

German author and philosopher Friedrich Nietzsche is well known for his philosophical four part novel "Thus Spoke Zarathustra" (1883). He studies the thoughts of many other philosophers before coming up with his idea of "life-affirmation". He felt it was more important to embrace that which was around us as opposed to living our lives according to our beliefs of a possible world beyond.

He championed the idea that any man has the ability to strive to be better and that human beings are not bound by society's morality.
8. German philosopher Arthur Schopenhauer believed in the innate goodness of mankind and held the optimistic view that all human misdeeds and suffering are caused by simple misinterpretation.

Schopenhauer was one of the most pessimistic philosophers in this quiz. Although interested in various religions, he usually considered to have been an atheist. He believed that suffering was normal and that our world is not a rational place. He believed that life was a frustration-filled and fundamentally painful condition.

He was an isolated and somewhat aggressive person who claimed that the world might not exist and was just a figment of our imagination or that the existence of mankind did not serve any purpose.

In his 1851 essay "Of Women" he described women as the weaker sex that was less reasonable than men. He also claimed they lacked the capacity to make decisions. His view on our world and the people who populated it, if it actually existed, was very negative indeed.
9. Which of these men is associated with the saying "Cogito ergo sum"?

A founder of Rationalism, Rene Descartes was one of the most influential philosophers of all time. Descartes is also often credited as being the father of analytical geometry and is sometimes mentioned in discussions of 'Renaissance Men'. His philosophy was based on the belief that opinions and actions should find their basis in reason and knowledge rather than on emotional response or religious belief. Descartes is famous for his idea "Cogito ergo sum" or "I think, therefore I am".

This is often interpreted to mean that if a being is able to think about their own existence, that this is proof that the "I" exists in order to have such thoughts.
10. Which of the following Dutchman wrote his philosophical masterpiece "The Ethics" in 1676?

"The Ethics" by Baruch Spinoza is one of the more unusual philosophical works to come out in the 17th century. Spinoza criticized the traditional conceptions of God, human beings, nature, and religion in this book. He also criticized the ethics and moral beliefs of his time. What many found confusing was that he also professed his view of God and nature as the most important fact of life.

This Dutch philosopher affected the beliefs of many later thinkers. His main idea was that reality is one substance with an infinite number of attributes of which only thought and extension are capable of appreciation by the human mind.
Source: Author dcpddc478

This quiz was reviewed by FunTrivia editor bloomsby before going online.
Any errors found in FunTrivia content are routinely corrected through our feedback system.
Most Recent Scores
Jan 06 2023 : Guest 81: 6/10
Dec 26 2022 : Guest 67: 6/10 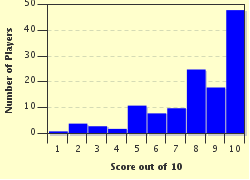