All About Anna Trivia Quiz

Anna is a Hebrew name that means gracious. It may be a derivative of the name Hannah. There are many famous people with this name. Let's take a look at some of them.

Quiz Answer Key and Fun Facts
1. Russian blond bombshell Anna Kournikova achieved fame for her skill in which of the following sports?

In 1995, Russian born Anna Kournikova became a professional tennis player. Her natural beauty led quickly to celebrity status and appearances in numerous magazines. Although her tennis career was relatively short due to ongoing injuries, it was her appearances on the court that led to her popularity. Following the end of her tennis career she went on to do commercials and television appearances.

Her personal romances have been the subject of media speculation although she has attempted to keep her personal life private.
2. Which of the following women was a world-famous Russian prima ballerina at the turn of the 20th century?

Russian ballerina Anna Pavlova was, at one time, the most famous prima ballerina in the world. Her most famous role was that of the dying swan in the ballet known simply as "The Dying Swan". Her graceful arms and hands were often commented on. She was well-known for her ability to express emotion through her dance.

She played on stages all over the world, and has become a legend in the world of ballet.
3. Anna Maria Alberghetti was a famous Spanish painter who married Salvador Dali in 1942.

Anna Maria Alberghetti was a famous Italian opera singer and actress. She appeared on the television program "The Ed Sullivan Show" over 50 times in the 1960s. She starred in theater and movies also. She was so gifted musically that she first performed at Carnegie Hall at the tender age of 13.
4. Anna Hazare is a famous Polish physicist who won the 2008 Nobel Prize in Astronomy.

Kisan Baburao "Anna" Hazare is an Indian social activist. He promotes forced vasectomies in order to control over-population issue. He frequently stages public fasts in order to bring attention to the needs of the people in rural areas. He has openly promoted the death penalty for corrupt politicians and public officials. Anna Hazare is considered a hero by many of the impoverished people in India.

He has been awarded numerous awards for his efforts to improve the lives of the people of India.
5. Anna Paquin, noted film and television actress from New Zealand, was actually born in which of the following countries?

Anna Paquin was born in Canada but moved to New Zealand at the age of four. She considers herself to be a true kiwi. This multi-talented performer won an Academy Award, and Golden Globe Award, a Scream Award, and a Satellite Award - all before she turned 30.

Hers is a wonderful story of a child performer who managed to grow into adulthood without most of negative effects that often plague young actors.
6. Which of the following women was named "Playboy's Playmate of the Year" in 1993?

Anna Nicole Smith was a poor Texas girl when she mailed in photographs of herself to "Playboy". After posing for "Playboy" she went on to do some mainstream modeling. She had some minor roles in film and became a media sensation, when at the age of 26 she married an 89 year old oil tycoon.

When he passed away her fight for part of estate was fodder for the paparazzi. She died of an accidental overdose at the age of 39, after fighting a prescription drug problem for years. Her early fairy tale life did not have a happy ending.
7. Anna Ioannovna ruled which country from 1730-1740?

Empress Anna of Russia ruled the country for ten years. She was married and then widowed within the space of two months and never remarried. When Emperor Peter II died without an heir, Anna was declared Empress by the Russian Supreme Privy Council which expected her to be nothing but a figurehead.

While in power she was responsible for many architectural advances in St. Petersburg and was an ardent supporter of the sciences. She was also known for her affinity to Germany and many of cabinet members were German.

When she passed away she left no direct descendant leading to discord and competition for power.
8. Which of the following works was British novelist Anna Sewell's only published work?

Anna Sewell was born in Great Yarmouth, Norfolk, England in 1820. A childhood injury confined her to the family home for most of her life. When she was able to get out, she used horse-drawn carriages. Her naturally gentle personality and love of animals, led her to write the children's novel "Black Beauty" in 1877. Largely bedridden at this stage in her life, her mother assisted her by transcribing her writing from notes. Due to her ill-health it took Sewell six years to write this childhood classic.

She passed away less than a year after it was published, but did live long enough to know that her novel, aimed at improving the life of horses, was a big success.
9. Which of the following is the name of the Canadian actress who gained famed for her role in the supernatural television drama "Lost Girl"?

Anna Silk is a Canadian actress who became famous for her role as succubus Bo Dennis, in the Canadian supernatural drama "Lost Girl". She is the daughter of well-known actress/director Ilkay Silk. Some of her films have included "Confessions of a Dangerous Minds" in 2002 and "Breakfast with Scot" in 2007.
10. British-born Anna Lee achieved fame for her skills in which of the following fields?

Anna Lee (1913-2004) was a British actress who became famous for her roles in Hollywood films and American soap operas. Some of her most famous films included "How Green Was My Valley" (1941), "The Sound of Music" (1965) and "What Ever Happened to Baby Jane?" (1962). From 1978 until 2003 she starred as the character Lila Quartermaine in the American television soap opera "General Hospital".

In her 60 year career she was known for her versatility, and professional attitude as well as her supportive, and easy-going nature.
Source: Author dcpddc478

This quiz was reviewed by FunTrivia editor bloomsby before going online.
Any errors found in FunTrivia content are routinely corrected through our feedback system.
Most Recent Scores
Jan 20 2023 : Hayes1953: 7/10
Jan 09 2023 : Guest 99: 9/10 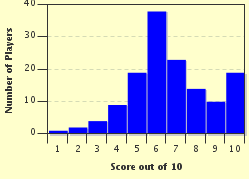 Related Quizzes
1. Famous People Named Bob (General Edition) Very Easy
2. Are they named Arthur or Art Very Easy
3. Who am I? Alan, Allan or Allen Very Easy
4. Was Alexander Great? Very Easy
5. A Bundle of "Bob" Very Easy
6. Alfred and Alfredo Look for a Surname Very Easy
7. Who am I? Benjamin, Ben or Benny Very Easy
8. Half an Arthur Easier
9. Smart Alecs and Alexes Easier
10. The Amanda Show Easier
11. Anthony's Brainwaves Easier
12. Am I Ann, Anne or Annie? Easier