After a wonderful holiday in Rome my host is throwing me a farewell party. Several famous Italian people are attending. Can you identify them from the butler's announcements?

A multiple-choice quiz by Team Pi in the Sky. Estimated time: 4 mins.

Share on Facebook
Share on Twitter
Share by E-Mail
Author
Christinap
Time
4 mins
Type
Multiple Choice
Quiz #
346,019
Updated
Dec 03 21
# Qns
10
Difficulty
Average
Avg Score
7 / 10
Plays
5181
Awards
Top 20% Quiz
This quiz has 2 formats: you can play it as a or as shown below.
Scroll down to the bottom for the answer key.

Quiz Answer Key and Fun Facts
1. My Lords, Ladies and Gentlemen, please welcome our first guest. A singer who brought fame to Italy by winning the Eurovision Song Contest in 1964. Who is this?

Gigliola Cinquetti gave Italy its first ever Eurovision win in 1964 when she was just 16. Her song, "Non ho l'eta" became an international hit. In 1974 she represented Italy in Eurovision again with "Si", which came second to Abba singing "Waterloo".

Her appearance in 1974 was censored by Italy because it coincided with a referendum campaign on divorce. As the title "Si", which means yes, was repeated several times during the song there were concerns that it could influence the vote. In the 1990s she went on to become a TV presenter and journalist, hosting current affairs programmes on RAI TV in Italy.
2. My Lords, Ladies and Gentlemen, raise your glasses to toast our next guest. He boasts that he is the greatest spy and lover of all time. Who is honouring us with his presence?

Casanova, full name Giacomo Girolamo Casanova de Seingalt, was an adventurer and author from Venice. Based on the tales told by himself in his life story his name has become synonymous with seduction. He had a varied career. Armed with a law degree he did practice law for a short time.

He also once entered a seminary, joined the army and became a professional gambler. Imprisoned in Italy for "immorality" he escaped and fled to Paris. Here he became a spy. He ended his days in Bohemia where he acted as librarian for Count Waldstein, and it was during this period that he wrote his memoirs.
3. My Lords, Ladies and Gentlemen, pray join me in welcoming our next guest who observed and reported on one of the great disasters of Roman times when Mt Vesuvius erupted. Do you know his name?

Pliny the Younger (61 AD - ca.112 AD), a Roman senator and the governor of Bithynia-Pontus, was one of the most well known of the Romans; firstly because there was an inscription detailing his life; also because two of his houses have been found; most importantly because we can read many letters that he wrote.

The one that is best known by the general public is that in which he described the destruction of Pompeii and Herculaneum. Others are also very revealing of life in that era, as when he described his house, gave accounts of law suits and told of the persecution of the Christians.
4. My Lords, Ladies and Gentlemen, please welcome this brilliant Italian who was a vital part of the Manhattan Project and has been called "the father of the atomic bomb". Can you give me his name?

Enrico Fermi (1901 -1954) was one of the greatest physicists of the 20th century. His brilliance was recognised at a young age and he began his graduate work at the age of seventeen. While doing research at the University of Rome he was part of a team that was trying to split the atom.

He made two discoveries, using neutrons for this purpose, which earned him the Nobel Prize for Physics in 1938. After he moved to America in 1939, he realised that when the nucleus of an atom was split the neutrons thrown off would cause another atom to split and so on, leading to a nuclear chain reaction.

It was the enormous energy released that enabled the atomic bomb to be developed. While he worked on the Manhattan Project which developed the first atomic bombs after the war he opposed further research into nuclear weapons.
5. My Lords, Ladies and Gentlemen, our next guest with his realistic interpretation of scenes from the Bible and of dramatic moments in the lives of saints made him the most exciting and innovative painter of his time. What is his name?

Caravaggio (1573-1610) revolutionised painting in his time. Before then painted images had been idealised but his work was realistic, even brutally so. He was apprenticed to a painter in Milan at the age of 11 but by 1588 he had shifted to Rome and in 1595 began to sell his own works.

This brought him to the attention of Cardinal Francesco del Monte, who helped him to get a commission to paint the Church of San Luigi dei Francesi. Although many deplored his dramatic style his reputation increased and he was acknowledged as a great artist.

His private life was less satisfactory and he was often in trouble with the authorities. He was often involved in fights and was once accused of murder and had to flee to Malta. Although fearful and stressed, the paintings he did at that time were his among his best. Eventually he was given a pardon by the Pope but died before he could return to Rome.
6. My Lords, Ladies and Gentlemen, please welcome the illegitimate daughter of Pope Alexander VI. Please take care what you eat and drink in her presence. Can you name the lady?

Illegitimate daughter of Venetian, Rodrigo Borgia, Lucrezia was married three times, each for political purposes. Her father became Pope Alexander VI and her name has become a byword for the political machinations and corruptness that characterised his Papacy. The whole Borgia family were reputed to be skilled in the use of poisons.
7. My Lords, Ladies and Gentlemen, a special welcome please for this star of the silver screen, perhaps better known to you as 'The Millionairess', or maybe 'The Countess from Hong Kong'. Who is the lady?

Born in Pozzuoli in 1934, Sophia Loren has won many awards for film acting, including an Academy Award for Lifetime Achievement.
In 2007 Sophia posed for the Pirelli Calendar and became its oldest ever model.
She was married to the film producer Carlo Ponti until his death in 2007, and they had two sons together.
In old age she remained a stunningly beautiful woman.
8. My Lords, Ladies and Gentlemen, please give a warm welcome to this gentleman who is famed for his excellence in the fields of astronomy, physics, philosophy and mathematics. I'm sure he'll be delighted to show you the moons of Jupiter through his new, improved telescope! Who is he?

Born in Pisa in 1564, in 1615 Galileo fell foul of the Inquisition for his championing of heliocentricity. Tried for heresy and forced to recant, he spent the rest of his life under house arrest. He spent the time usefully however, and produced some of his greatest works during that time.
The improvements he made to the telescope enabled him to see the moons of Jupiter, which are now known as the 'Galilean Moons' in his honour.
9. My Lords, Ladies and Gentlemen, your appreciation please for our next guest. One of Italy's foremost composers of the Baroque period. Hopefully he brings summer with him, not winter. Who is this composer?

Antoni Vivaldi was a composer and a priest. His red hair led to him being given the nickname "The Red Priest". He is known mainly for violin concertos, although he also wrote choral works and over 40 operas. His best known and most popular work is the series of violin concertos known as "The Four Seasons"
10. My Lords, Ladies and Gentlemen, our final guest needs little introduction for he is "the noblest Roman of them all". Who is he?

In Shakespeare's play "Julius Caesar", Mark Antony describes Brutus as "the noblest Roman of them all". He says this during his oration to Caesar with Caesar's body laying at his feet. In real life Marcus Junius Brutus was a politician who took part in the killing of Julius Caesar.

Despite an amnesty being declared by the Senate, Brutus and his co-conspirators were forced to flee Rome because of public outcry, and he settled in Crete. He committed suicide in 41BC after defeat at the second battle of Phillipi.
Source: Author Christinap

This quiz was reviewed by FunTrivia editor Snowman before going online.
Any errors found in FunTrivia content are routinely corrected through our feedback system.
Most Recent Scores
Jan 03 2023 : Gispepfu: 8/10
Dec 25 2022 : SeverinaStar: 10/10 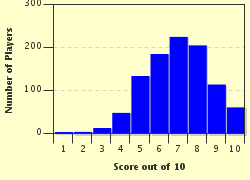