What have the Italians done for us? Have fun finding out in this quiz.

Meucci was born in Florence in 1808. He studied chemical and electrical engineering before getting a job as stage technician in the Florentine Teatro della Pergola. Here he installed his first device to transmit voice sounds: a hollow tube with a horn on either end.
Meucci and his wife emigrated to Cuba in 1835 and to New York in 1850. From 1856 on, he worked on a device that could transform sound into electromagnetic vibrations, transmit these vibrations via electric wiring, and transform those back into sound on the other end. He made several prototypes, and filed for a patent caveat (the precursor to a patent application) in 1871.
However, Meucci did not have sufficient funding to file for a real patent, and besides his description of the device was fairly vague. If he had filed for a full patent, the application might have been rejected because of too little detail on the transformation of sound into electric current and vice versa.
The first patent for a telephone was granted to Alexander Graham Bell in 1876. It was attacked unsuccessfully in court many times, among others by Meucci. Because the debate is still unresolved, I've added the word "probably" in the question. Meucci died in 1889.
2. Which Italian is credited with the invention of the electric battery?

Alessandro Volta (1745-1827) was born in Como and resided there until his death. He experimented with various metals and fluids, until coming up with a pile consisting of a series of copper and zinc plates separated by diluted sulphuric acid. This Voltaic pile (as it was named in his honour) produced a continuous electric current. Car batteries still use this same principle.

Volta also discovered methane. Volta also gave his name to the SI unit of electric potential.
3. Who has amassed a large number of patents in the field of wireless telegraphy and radio?

Marconi was born in Bologna in 1874 and grew up in England. He studied electricity and was fascinated by the telegraph. At that time the telegraph operated only by wire, but many fruitless efforts were already made to send signals without any wiring. Marconi tackled this problem using the electromagnetic radiation waves discovered by Heinrich Hertz.
In 1894-1895 Marconi's experiments paid off, and in 1896 he demonstrated his wireless telegraph in Britain. Between 1897 and 1912 Marconi obtained about six British patents and thirty-odd US patents dealing with what he called "wireless telegraphy" and now is considered as signalling radio waves. His company started transatlantic signalling in 1902, but not continuously with effective results.
Marconi shared the Nobel Prize for Physics in 1909 with the German physicist Karl Braun (1850-1918). Marconi died in Rome in 1937.
4. Who is credited with the invention of the barometer?

Torricelli was born in Rome in 1608. He studied mathematics and philosophy, and wrote several works on geometry.
Once he was asked by people responsible for pumping potable water, why they couldn't reach a depth beyond a certain limit. Torricelli began experimenting, and he discovered the following phenomenon. If one takes a closed tube, filled with some fluid, and then opens one end over a basin with the same fluid, the fluid in the tube will only reach a certain height (leaving a vacuum above it in the tube). On repeating the experiment with mercury instead of water, Torricelli found this to be true with any fluid. But as mercury is much heavier than water, one would notice this phenomenon using a shorter tube.
Torricelli then explained this phenomenon by stating air had a certain weight, and the pressure of the column of air above the basin was responsible for the height of the fluid. That's how the barometer was invented.
Torricelli died in Florence in 1647.
5. Who was the Italian businessman to whom we ascribe the technique of canning vegetables? His company is known for canned tomatoes.

Cirio (1836-1900) was born in Sardinia but moved to Turin. There he started in 1856 a company that heated tomatoes (and later on, also other vegetables) and preserved them in tin cans.
Italians who emigrated to the USA were very fond of Cirio vegetables, for these tasted a bit like home.
The brand of Cirio is still in use. The cans are readily recognisable in supermarkets by the blue paper wrappings. Tomatoes are the best sold products, but the Cirio range also includes lentils, chickpeas and Borlotti beans.
6. Who was the founder of the first literary café in Paris? He also introduced individual portions of Italian ice cream.

Procopio, or Procopius as he named himself, was probably born on Sicily in 1651. His surname according to his birth certificate was Cuto, which the French misunderstood for "Couteaux" - knives. Hence the surname "dei Coltelli" - the Italianized version of what the French mistook for his actual surname.
When Procopio arrived in Paris in the first half of the 1670s, there were already some cafés established. But as coffee was quite expensive, they struggled to survive. Most of them sold also fresh beverages such as lemonade or barley water.
Procopio opened a café in Paris in 1686, just across from the Comédie française which opened around the same time.
Procopio was the first to make a success of his café, and he was also the first to sell individual portions of ice cream (mostly fruit sorbets) to the bourgeoisie. Previously ice cream was so expensive only the top nobility could afford it.
Procopio died in 1727. His café still exists, and contains memorabilia from famous guests such as Voltaire, Benjamin Franklin, Victor Hugo and Napoleon.
7. To whom do we owe the pianoforte?

Cristofori was born in Padua in 1655, as mentioned in his birth certificate. After that, the first documented event in his life was in 1688, when he was appointed by prince Ferdinando de Medici, Grand duke of Tuscany, as a musician and instrument builder.
At the end of the seventeenth century, there were already some keyboard instruments available, such as the harpsichord and the spinet. But Cristofori developed an instrument "che fa il piano e il forte" (translated: that can play hard or soft music). Cristofori used the obsolete word arpicembalo for this instrument, but later the name of pianoforte (and later piano) was adopted.
Cristofori died in 1731. Three of his original pianofortes still exist. One of them is so degraded it can't be played any more, one has been altered through the ages so the original sound is lost. The last one has been used to make some recordings but is out of tune.
8. Who was the Italian physicist involved in the construction of the first nuclear plant ever?

Fermi was born in Rome in 1901. He excelled in quantum mechanics and in the branch of physics created by Einstein's theory of relativity.
In 1938 Fermi moved to the USA, after picking up the Nobel Prize for Physics in Stockholm. In 1939 Fermi and some of his colleagues (including Albert Einstein) warned President Roosevelt that a nuclear bomb was theoretically possible, and that most likely Germany was ahead in the race to make one.
Fermi was appointed to build a first nuclear reactor in the Chicago area, and the first atomic chain reaction was achieved in December 1942.
Fermi died in Chicago in 1954.
9. Which monk created musical notation on a five line staff?

There is no birth certificate for Guido of Arezzo. His masterpiece was written around 1024. Because Guido himself made the remark that he completed his masterpiece (the "Micrologus") at age 34, his birthday should be around 991.
Guido created a didactic method to teach the church choirs the Gregorian chant, and published this method in a book called the "Micrologus". This method contains two novelties: the five line staff on which round notes are drawn, and the naming of the notes as ut - re - mi - fa - so(l) - la. Soon after publication, a seventh note was added: the si (renamed ti in the Nineteenth Century in English speaking countries). The names for these notes were taken from the hymn to Saint John "Ut queant laxis".
Guido died sometime after publishing the "Micrologus", but an exact year of his death cannot be ascertained.
10. Who made a fully functional robot around 1495?

Could anyone write a quiz on Italian inventors without inserting something about da Vinci? I suppose not.
Leonardo da Vinci was born in Vinci (Tuscany) in 1452. He started his formal training as an apprentice to Andrea del Verrocchio (1435-1488) in 1466. There Leonardo not only learned painting and sculpting, but also metallurgy, chemistry and carpentry.
After leaving Verrocchio's studio in 1476, Leonardo worked for various employers such as Lorenzo de Medici, Ludovico Sforza, Cesare Borgia, and Francis I of France.
Leonardo left us paintings, sculptures and many drawings, but also a vast array of scientific observations and sketches of inventions. Some of these inventions were at that time impractical (for instance the design of an aeroplane), others were indeed made. A fine example of the latter one was a mechanical knight: a metal harness moved by way of pulleys and cables, demonstrated at a Carnival in Milan around 1495.
Source: Author JanIQ 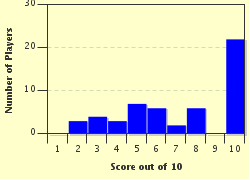 Related Quizzes
This quiz is part of series universal challenge 2016:

In November 2016 I wrote one new quiz - in each and every category of FunTrivia. Here they are.