Time For A Rebirth! Trivia Quiz

The Renaissance was a rebirth of the knowledge of the classical Greeks and Romans that began in fourteenth century Italy. Can you recognize the accomplishments of some of the key participants?

Quiz Answer Key and Fun Facts
1. Considered to be the "father of his city", which wealthy banker beautified the city of Florence in the fifteenth century and established an academy for the study of Plato's works?

A wealthy banker, Cosimo de Medici used his money to control the city of Florence and surround himself with beauty. Even though he did not hold public office, it was said by Pope Pius II that "Political questions are settled in [Cosimo's] house. The man he chooses holds office ...

He it is who decides peace and war ... He is king in all but name." It is interesting to note that the people of Florence during this time believed they had a republican government! He commissioned works of art that not only beautified the city, but supported artists such as Donatello and Brunelleschi.

Not only that, but his son, Piero, and grandson, Lorenzo the Magnificent", continued his efforts to make Florence the most important city-state of the time in Italy.
2. Which Dominican priest, whose sermons spoke against the "paganism" of the Renaissance, almost ended the movement in Florence?

With his teachings Savonarola inspired a brief uprising in Florence that resulted in the temporary exile of the Medici family. It was probably easy for him to convince the common people that the wealthy were spiritually and morally corrupt; the Renaissance was more of an intellectual movement among the wealthy, and didn't immediately change the lives of the majority of the people.

He exiled artists and scholars, along with their patrons. Many valuable works, including books and art, were burned and lost forever.

When the pope intervened and threatened to place Florence under the interdict, opinion changed. Savonarola was declared a heretic and burned at the stake. The Medici returned to Florence, and the ideals of the Renaissance continued to thrive there.
3. Considered to be the "father of humanism", who traveled throughout Europe, searching for manuscripts that he could copy and include in his own library?

A fan of classical literature, Petrarch modeled his works after writers such as Virgil and Cicero. He wrote poetry, biographies, and letters in Latin; he also, however, wrote in the Italian vernacular. Well known during his life time for his love poems written for Laura, the pattern of writing, called the Petrarchan sonnet, was used by many later on, including William Shakespeare.
4. Whose work, "The Book of the Courtier", is often said to give one of the best descriptions of the ideal Renaissance man?

The wealthy attempted to exemplify these ideals in the education of their sons. Many sources cite Leonardo da Vinci as the epitome of the Renaissance man.
5. Considered to be the first important painter of the early Renaissance, which artist created a fresco depicting the lives of the Virgin Mary and Christ in the Scrovegni Chapel in Padua?

One of the reasons that Renaissance artists were able to create such realistic art is because they studied nature and depicted the real world. Giotto was one of the first to do this. It is said that his teacher, Cimabue, tried to brush a fly from one of Giotto's paintings, only to find that the fly was part of the picture! Giotto, also a talented architect, designed the bell tower for the Florence Cathedral.
6. Who won a competition to sculpt bronze doors for the Baptistry, a church in Florence? The project took twenty-eight years to complete.

Contest participants were to submit a sample panel depicting Abraham's sacrifice of Isaac. It is said that when the great Michelangelo saw the doors, he stated, "These doors are worthy to decorate the gates of Paradise". Ghiberti was not only a sculptor, he also was a collector of classical artifacts, historian, and humanist.

His greatest contribution may have been as a teacher in his studio where many artists, including Donatello, trained.
7. Which Italian writer wrote the "Decameron", a collection of stories set during the time of the Black Death, which ravaged Florence in 1348?

It may well be that one of the reasons the Renaissance flourished in Italy was because the people needed to create beauty in the midst of their horrible existence. It is also possible that some people realized they might not lead a long life; if they wanted to create something, they had been get after it! In 1348 the city of Florence was struck with the Black Death.

The "Decameron" is about a group of people who leave the city and try to find refuge in a country villa. To pass the time, they tell stories; these stories include a variety of genres, such as folk tales, fables, and romances, that are considered to reflect the lives and values of more ordinary people in Renaissance Italy - peasants, the middle class, and the clergy - not just the wealthy.
8. An early humanist, which writer wrote "Oration on the Dignity of Man", stating that God had given people free will?

Giovanni Pico della Mirandola, known simply as Pico, was one of those who benefited by the founding of the Medici academy in Florence. After studying Judaism, Christianity, and Islam, Pico published and prepared to defend his "900 Theses", which dealt with many different aspects of humanist knowledge. Of course, many humanistic ideas and writings were condemned by the Catholic Church, and Pico's were not an exception. Declared a heretic and briefly imprisoned, Pico lived under the protection of the Medici, however, that protection ended as he came more and more under the influence of Savonarola.

Historians theorize that his life may have been cut short on order of a member of the Medici family.
9. An influential political philosopher, whose book "The Prince" proposed that the ruthless citizen-soldier was the best kind of leader?

In 1494 the French invaded northern Italy. Appointed as a Florentine ambassador to France, Machiavelli realized that the Italian city-states were no match for the military strength of the French. It is believed that "The Prince" was written as a guidebook for the person who would unify the feuding Italian city-states.

He advised to use any means necessary, and that it was better to be feared than loved.
10. Working with Nicholas of Cusa, which secretary to the pope introduced a research technique known as "textual criticism"?

In a "textual criticism" study, a document is analyzed for consistency. Writing elements, such as the words and spellings are examined to be sure that they are the type that would have been used in the time the document was supposedly written. For example, "The Donation of Constantine" was a document that the Catholic Church said had been written by the Emperor Constantine. With this document, he gave control of Italy to Pope Sylvester I when he moved his capital to Byzantium, later called Constantinople. Valla and Nicholas of Cusa proved this document was a forgery by pointing out the use of words like "fief", which was unknown in Constantine's time.

This new method helped thinkers to see previously accepted views in other ways and even question them.
Source: Author ponycargirl

This quiz was reviewed by FunTrivia editor bloomsby before going online.
Any errors found in FunTrivia content are routinely corrected through our feedback system.
Most Recent Scores
Jan 08 2023 : Guest 67: 4/10
Dec 19 2022 : Guest 172: 10/10 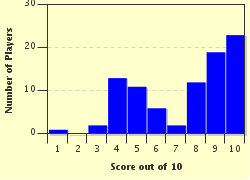