Match these native Brooklynites with the description which best fits them.

Bernie Sanders is an American politician who was voted the junior US Senator from Vermont in 2007. He became the longest-serving congressional independent in US congressional history before joining the Democratic Party in 2015. Bernie and his 'socialist' views played a big role in the 2016 election campaign, running for the party's presidential nomination against former Secretary of State Hillary Clinton.

In his youth, Sanders lived in the Midwood section of Brooklyn and attended Brooklyn College for a year (1959-1960) before transferring to the University of Chicago.
2. Painter for 'The Saturday Evening Post'

I had no idea Norman Rockwell (1894-1978) was born in Brooklyn, NY (see www.biography.com). He was a painter and illustrator, known for his covers on 'The Saturday Evening Post' for 47 years. His covers beautifully depicted scenes of American life. Among his most iconic covers were the 1927 celebration of Lindbergh's crossing of the Atlantic, and the 1969 cover from 'Look' magazine showing the imprint of Neil Armstrong's left food on the surface of the moon.

In 1977 Rockwell was awarded the Presidential Medal of Freedom.
3. Comedienne and mother of Ben Stiller

Anne Meara (1929-2015) was another native Brooklynite. She and her husband formed the popular 1960s comedy duo of Stiller and Meara, often appearing on "The Ed Sullivan Show". She went on to become an actress of stage, TV and movies, and, eventually, a playwright. Anne and Jerry Stiller were married in September 1954, and are the parents of Ben Stiller and Amy Stiller. Anne was nominated for four Emmy Awards, a Tony Award and won a Writers' Guild Award.
4. Singer of "Stormy Weather"

Lena Mary Calhoun Horne (1917-2010) was born in the Bedford-Stuyvesant section of Brooklyn. Her career as an actress and jazz and pop singer spanned over 70 years, including movies, TV and theater. She appeared in the 1943 films, "Cabin in the Sky" and "Stormy Weather". Horne was an ardent Civil Rights activist and, because of her political activity, she was blacklisted and unable to get work in Hollywood in the early 1950s (McCarthyism and the 'Red Scare').

She continued to work as a night club performer and singer, and was part of the March on Washington in 1963.

Coney Island in Brooklyn, New York is the birthplace of author and playwright Joseph Heller (1923-1999). Heller's most famous book, "Catch-22" was published in 1961. It is a satirical, anti-war novel showing the bureaucracy of war. The phrase 'Catch-22' was added to the dictionary in the 1970s (after the release of the movie); it means a vicious cycle, a paradoxical situation where the contradictory rules prevent a solution.

In Heller's original "Catch 22" a soldier claims he is insane in order to avoid dangerous missions; however, the fact that he is trying avoid them proves he is sane!
6. Frozen food inventor

Where would the 'Green Giant' be without Clarence Birdseye (1886-1956)? Clarence Birdseye, born in Brooklyn, was a naturalist and an inventor. In 1922 he invented a process called 'quick-freezing'; Birdseye later obtained a patent (in 1925) for his double belt freezer, and the frozen food industry was born! In 1927, he extended the process from fish to meat, poultry, fruit and vegetables. Two years later, he sold his company, General Seafood Company, for $22 million; one million 1929 dollars = $13,831,871.34* in mid-2016. General Seafood eventually became General Foods Corporation, founder of Birds Eye Co. *www.dollartimes.com
7. Suffragist, civil rights activist and co-founder of the NAACP

Brooklyn also claims Mary White Ovington (1865-1961), a journalist, activist and suffragist (that's a lot of 'ists'). Mary's parents were Unitarians who supported women's rights and the anti-slavery movement (in today's language: 'liberals'). In 1890, Mary went to hear Fredrick Douglass speak at a Brooklyn Church and, at that point, became involved in the campaign for civil rights. On the 100th anniversary of Lincoln's birthday, Ovington got together with Moorfield Storey and W.E.B. DuBois to form a civil rights organization which eventually became the NAACP.
8. Actress in "My Little Chickadee"

Mary Jane 'Mae' West (1893-1980) was an actress, a movie star, a singer, an author, comedian and "sex symbol", with a career lasting seven decades. As Ms West once said "You only live once, but if you do it right, once is enough"! Born in the Bushwick section of Brooklyn, NY, she alone may have set the 'women's movement' ahead by at least 50 years.

She made fun of the conventional mores and standards, faced censorship, gender discrimination, and the Depression Era - and withstood them all. Her 1959 autobiography "Goodness Had Nothing to Do with It" says it all.
9. Astronomer and author of "Cosmos"

Bensonhurst, Brooklyn, NY claims astronomer Carl Sagan (1934-1996) as one of its favorite sons. Influencing astrophysicists like Neil deGrasse Tyson, Sagan was one of the best known scientists of the 1970s and 1980s. He researched extraterrestrial life, and helped assemble the information on the Pioneer plaque and the Voyager Golden Record sent into space to potentially make contact with other life forms.

His book "Cosmos" was published in 1980 (about "billions and billions" of stars). Sagan is also the winner of two Emmy Awards, a Peabody Award and a Hugo Award.
10. Police Officer and 'whistleblower"

Frank Serpico is a retired New York City Police Department officer. He is known for having helped expose police corruption in the late 1960s and early 1970s. His whistle-blowing resulted in Mayor John Lindsay's establishing the Knapp Commission to further investigate the NYPD. Serpico joined the Police Force in 1959, and later worked 'plainclothes' where he discovered widespread corruption.

His name shot (pun, eh?) to fame after the 1973 movie "Serpico", based on his life, was released.
11. Brooklyn Dodger pitcher

Home grown professional baseball pitcher, Sandy Koufax was raised in Borough Park, Brooklyn, NY. He was a left-handed pitcher for the Brooklyn/Los Angeles Dodgers from 1955-1965. Unfortunately, arthritis ended his career prematurely at the age of 30.

In 1972, at 36 years old, Sandy became the youngest player ever elected to the Baseball Hall of Fame. Some of his outstanding feats: the first major league pitcher to pitch four no-hitters, and only the eighth in baseball history to throw a 'perfect game'.
12. First woman ever to run for the Democratic Party's presidential nomination

Shirley Anita St. Hill Chisholm (1924-2005) was a teacher and politician who became the first African-American congresswoman in 1968. She represented New York's 12th congressional district in the House of Representatives for seven terms, until 1983. In 1972 she ran for the Democratic nomination for the presidency, the first major-party black candidate to do so. Throughout her career, Chisholm was a staunch advocate for educational opportunities and social equality, and a role model for women of all races.
13. Actor, comedian, writer, director and "2000 Year Old Man"

Melvin James Brooks Kaminsky is another talented artist who was born in Brooklyn, New York in 1926. He was an early writer for Sid Caesar's comedy TV show "Your Show of Shows", and worked with Carl Reiner to produce a TV comedy skit and record of the "2000 Year Old Man" in 1961; the skit was later tuned into a short film/comedy in 1975. Among Brooks' other well-know creations: "Young Frankenstein", "The Producers", "The History of the World, Part 1", "Blazing Saddles", "Spaceballs" and so many others.
14. Supreme Court Justice

Supreme Court Associate Justice Ruth Bader Ginsburg was born in the Flatbush section of Brooklyn, NY in 1933 and raised there. She was appointed by President Bill Clinton and took the oath of Office in 1993. She was only the second woman to serve on the Supreme Court, after Sandra Day O' Connor. Before becoming a judge, Justice Ginsburg had been an attorney espousing the advancement of women's rights, and her leanings on the Court are considered 'liberal'.
15. "Scarface"

Gangster Alphonse Gabriel 'Al' Capone (1989-1947), nicknamed 'Scarface', rose to fame in Chicago during the Prohibition Era, but he was born in Brooklyn, New York, one of nine children. As a child he became involved with small-time gangs like the Junior Forty Thieves and The Bowery Boys before joining the Brooklyn Rippers.

He finally joined the powerful Five Points Gang, alluded to in Martin Scorsese's 2002 film "Gangs of New York". Capone was prosecuted in 1931 for tax evasion. He was convicted and sentenced to 11 years in Federal prison, and was released in eight years. 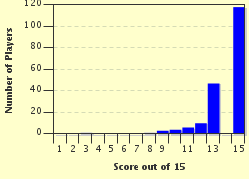 Related Quizzes
1. They Came From New York Average
2. King of Most Trades Average
3. Famous New Yorkers Tough
4. Famous Faces of Buffalo, NY Average
5. Famous People From Long Island Average
6. Famous People from the Southern Tier of NY Average
7. Famous Long Islanders Part II Average
8. Names in Early American History Average
9. American Rats Average
10. I Wish That I Could Have Been There With Him Average
11. Famous Firsts By American Women Average
12. Why Did It Have To Be Me? Tough