Can you identify these famous people who were born in the state of New York?

Quiz Answer Key and Fun Facts
1. I was born in Angola, New York, and invented air conditioning. A well-known brand of air conditioning equipment still bears my name. Who am I?

Willis Carrier is known to many as "The Father of Modern Refrigeration and Air Conditioning." He submitted drawings in July 1902 to a publishing company in Brooklyn that was experiencing "quality problems." His design added humidity control, which was a new idea in the design of air conditioners.

In 1906 he received a patent for what he called the "Apparatus for Treating Air." Carrier opened his own domestic company by 1915 and expanded his business to Japan and Korea in 1930. Today the Carrier Corporation remains a leader in refrigeration and HVAC.
2. A pioneer in the field of photography, I was born in Waterville, New York. My name is part of a well-known company that still specializes today in photographic materials, services and equipment. Who am I?

The Eastman Kodak company was founded in 1892, and popularized the use of roll film. Interestingly, Kodak was devised by Eastman and his mother using an anagrams set, and means absolutely nothing. Eastman just knew he wanted another word for his company that began with a K and ended with a K! Not only did Eastman patent roll film, he also developed the first camera to be made specifically for roll film.

The manufacture of an affordable camera and aggressive advertising quickly made Eastman Kodak a household name.

It is estimated that in 1975 Eastman Kodak had 90% of photographic film sales in the United States but by the late 1990's, company sales began to decline, mostly because of the transition to digital photography.
3. I was a biochemist and pharmacologist, born in New York City. In 1988, with George Hitchings and James Black, I was awarded the Nobel Prize in Physiology or Medicine. Who am I?

Gertrude Elion's accomplishments are totally amazing! She helped develop the first treatment for leukemia and the first immuno-suppressive agent. She also developed medication for gout, malaria, meningitis, septicemia, viral herpes, and bacterial infections of the urinary and respiratory tracts. She graduated from New York University in 1941 with a Masters in Science, but never obtained a formal Ph.D. Elion said, "I had no specific bent toward science until my grandfather died of cancer. I decided nobody should suffer that much."
4. I am from Brocton, New York. My claim to fame is the invention of a comfortable railroad sleeping car. Who am I?

After experiencing a very uncomfortable train trip, Pullman decided to design a railroad car that contained sleeping berths. The upper berth was folded up during the day, and folded down at night. Together with the seats below, it made a much more comfortable accommodation. Drapes provided privacy, and there were washrooms at the end of each car for men and women. Pullman's company also designed luxury accommodations that included options such as carpeting, card tables, and libraries.

The Pullman company was formed in 1862 and ceased production in 1982. One of its famous presidents was Robert Todd Lincoln.
5. My name is Jonas Salk. Born in New York City in 1914, I worked in my later years to develop an AIDS vaccine, however, I am better know for my work in developing a vaccine for:

Polio was considered by many to be the most frightening public health problem after World War II. A 2009 PBS documentary said that the only comparable fear at the time in the U.S. was the atomic bomb. The fact that Franklin Roosevelt contracted the disease and was so prominent a public figure had contributed to rising awareness. Salk's vaccine was field tested in 1955, and was so successful that he was proclaimed a "miracle worker."
6. My name is Margaret Sanger. I was born in Corning, New York, and am best known for opening the first birth control clinic. I was also the one who coined the phrase "birth control."

The earliest reference to birth control comes from the Bible. People throughout history tried various techniques. However, it wasn't until 1914 that Margaret Sanger actually coined the phrase. In her publication, "The Woman Rebel", according to the PBS program, "The Pill", she did not "give any instructions regarding specific methods for contraception, but the New York City postmaster banned the journal under the Comstock Law category of "obscene, lewd, lascivious matter." Rather than face charges in the United States, Sanger fled to England, where she continued her work.

The charges were dropped three years later after she returned to New York to face trial. Finally, in 1923, she opened the first legal birth control clinic in the United States.
7. Born in Rodman, New York, I created a business that is well-known for "five and dime" stores, however, I was also the first American to put items in self-service display cases.

Woolworth's idea of fixed prices for items meant no haggling, and the self-service display cases meant that customers could help themselves, and fewer salespeople were necessary. By the time of his death in 1919 there were more than 1,000 Woolworth stores worldwide, and the estimated value of the business at that time was more than $65 million.

In 1997 the original U.S. chain went out-of-business, and what was left of the firm is known as Foot Locker, Inc.
8. My name is Linus Yale, and I was born in Salisbury, New York. I was an American mechanical engineer. Today one would still find my name on what item?

Yale was able to grow his father's business, which originally specialized in bank locks. His achievements included perfecting a mechanism called a "clock lock" and inventing the double lock. He also improved the use of locks on post office boxes. His many patents were not just related to locks; he also patented devices that aided in mechanics and engineering.

At one time Yale was interested in portrait painting. As it turned out, his artistic ability proved beneficial in making detailed sketches and drawings of his inventions.
9. Originally from Central Bridge, New York, I was the inventor of air brakes, which greatly revolutionized train travel. Who am I?

During his lifetime George Westinghouse formed and directed more than sixty companies to market his 361 patented inventions. Although many people, including Thomas Edison, believed the use of alternating current was a health hazard, his Westinghouse Electric Company became one of the greatest electrical manufacturing companies of its time.

The invention of the air breaks enabled trains to be stopped with more quickly and effectively, and was eventually adopted on most railroads worldwide.
10. My name is Louis Tiffany. I was born in New York and made my living as a craftsman who patented Favrile glass. Favrile glass was used to make what other product that made me famous?

Tiffany took the term "Favrile" from a French term for "handmade." He trademarked the term, and eventually used it to describe all his glass, enamel, and pottery. Although his company is best know for its stained glass and lamps, it also manufactured interior decorations, such as vases and mosaics.
Source: Author ponycargirl 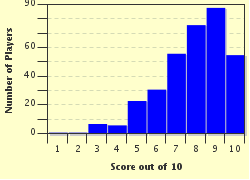