Can you identify these famous personalities who liked to imbibe?

Quiz Answer Key and Fun Facts
1. This jetsetting American author was awarded the Nobel Prize for Literature in 1954. He was fond of rum, and given to brawling. F. Scott Fitzgerald was one of his many frequent drinking companions.

Hemingway ended his life with a shotgun in 1961. His father and two siblings also committed suicide.
2. This Great Brit led the UK through WWII, and enjoyed his liquor. He was an admired orator; one of his addresses was the "Iron Curtain Speech."

Churchill's Conservatives were defeated by Clement Attlee's Labour Party in the 1945 election following WWII, despite Churchill's sterling wartime reputation.
3. This writer is known for her devastating wit, perhaps fuelled by her fondness for gin. She once savaged Katharine Hepburn, claiming "She runs the gamut of emotions from A to B."

Parker was placed on the Hollywood blacklist as a "Communist". She died in 1967, leaving everything to the Martin Luther King, Jr. foundation.
4. This Queen of Egypt entranced both Julius Caesar and Marc Antony. Perhaps the plentiful and excellent wine readily available at her court added to her appeal?

Cleopatra committed suicide via poisonous asps. She has been portrayed on film by Elizabeth Taylor and Vivien Leigh.
5. This prominent Irish author, aesthete and wit wrote the novel "The Picture of Dorian Gray" and the play "An Ideal Husband." Absinthe may have provided some of his artistic inspiration.

Wilde spent time in prison after being convicted of "gross indecency." He died of meningitis in 1900, and is buried in Paris, where his tomb is covered with the lipsticked kisses of fans.
6. This highly respected film actor, star of "The Maltese Falcon" and "High Sierra", rang up considerable bar tabs indulging in scotch. His trademark lip scar was likely acquired during a bar-room brawl.

Bogie reportedly claimed that "The problem with the world is that everyone is a few drinks behind."

No one knows for sure how he got his lip scar as he never disclosed how it happened. One theory is that he was involved in an accident when he was a child. Another is that he was hit with shrapnel during a shelling of his ship in World War II. Another is that he was struck by a military prisoner while transporting an inmate to another facility. None of these "seem to fit", as there is no mention of the lip scar on his discharge papers from the navy (post service physical).
7. This American painter, an abstract expressionist, pioneered the "drip" technique. Whiskey and beer were a significant part of his life, and perhaps art. Unfortunately, liquor also played a part in the car accident that ended his life.

Ed Harris was nominated for a 2000 Academy Award for portraying Pollock. Though he did not bring home the Oscar, his costar Marcia Gay Harden did. She portrayed Pollock's wife, Lee Krasner.
8. This yellow, donut-loving cartoon character declared beer "The cause of, and solution to, all of life's problems."

In addition to working at the nuclear power plant, Homer has held over 100 different jobs. They range from bootlegger to monorail operator.
9. This great American jazz singer recorded "Strange Fruit." She consumed copious amounts of liquor in her lifetime, in addition to illegal drugs. She is sometimes known as "Lady Day."

Holiday, according to her own accounts, worked for a time as a prostitute.
10. This legendary 19th century American dressed like a man, was deadly accurate with a shotgun, and terrorized saloons after her frequent whiskey-drinking sessions.

Calamity Jane was born as Martha Jane Canary in 1852, and was orphaned in her teens. She was said to be infatuated with Wild Bill Hickock, and asked to be buried next to him upon her death. She died in 1903.
Source: Author alexicon 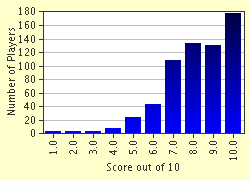 
Other Destinations
Explore Other Quizzes by alexicon