It's Not Dennis Day Trivia Quiz

We've had a lot of fun with Doris Day's name, how about some with her brother Dennis! (Now, don't write me, I know they're not related.)

Quiz Answer Key and Fun Facts
1. Although born in Pennsylvania, this son of Italian immigrants did not speak English until starting grade school. Who is this actor who fought at Iwo Jima and acted in over 75 films, such as "The Green Berets", "We're No Angels", and "God's Little Acre"?

When Aldo Ray was born in eastern PA, the family name was Da Re. His family moved to California when he was four years old. Aldo was "discovered" at age 24 when he drove his brother Guido to auditions for the 1951 film "Saturday's Hero." But the director was intrigued by Aldo's gravelly voice, and he was hired.

His best role was in the 1955 film "Battle Cry," but it also resulted in his being typecast.
2. This sportscaster is known for his hosting of ABC's "Wide World of Sports" for 37 years. Who is this man who was greatly respected for his reporting of the 1972 Munich Olympics massacre of Jewish athletes?

McKay's famous call at the beginning of each "Wide World of Sports" episode was "The thrill of victory and the agony of defeat." "Time" magazine put the series on its list of 100 best television programs in 2007.

McKay covered 12 different Olympic Games telecasts. Among the halls of fame of which he is a member are the American Sportscasters Association HoF, the U.S. Olympic HoF, and the Television HoF. In 1993 "TV Guide" named him the best sportscaster of the 1970s.
3. This 1995 Cooperstown inductee was a Negro League standout from 1934 to 1950. Who was this seven-time All-Star pitcher who defeated Satchel Paige in three of the only four games in which they faced off?

Day's quiet off-the-field manner was quite a contrast to Satchel Paige's flamboyance. After falling one vote short of induction into Cooperstown in 1993, he was inducted in 1995 by the veterans committee, just six days before passing away at age 78.
4. This unique guy built his own guitar, called the Red Special, as a teenager, and later formed the band Smile. He studied astrophysics and eventually earned a PhD. In 2005 he was appointed a Commander of the Order of the British Empire. Who is this activist and rock star who has both an asteroid and a species of damselfly named after him?

In 1971 May left his studies to go on the road with Queen. But he never totally gave up on academic pursuits and, 46 years later, acquired the PhD. In between he had a Hall of Fame music career, as well as finding time for activism, especially in the area of animal welfare, founding The Save Me Trust in 2009.
5. This singer from Bayou Chicot, Louisiana, competed in Season 9 (2015) of TV's "The Voice." He sang "Let Her Cry" in his first appearance. Coached by Adam Levine, his rendition of "Fortunate Son" defeated Dustin Monk in the Battles. Who is this singer who then lost to Shelby Brown in the Knockouts?

Dupre was an EMT-Paramedic before his appearance on "The Voice" launched his music career. In 2016 he released his first album, "Stoned to Death," which features ten songs, seven of which he wrote.
6. Born in Des Moines, this U.S. Army veteran served as Iowa's governor from 1969 to 1983. Who is this former chairman of the National Governors Association?

More commonly referred to as Robert D. Ray, the former governor is a native of Des Moines and an alumnus of Drake University with both a BA in Business and a Law Degree. As governor he also served as Chairman of the Republican Governors Association and as president of the Council of State Governors.

His legacy as Iowa's governor includes his work on behalf of Southeast Asian refugees in the US and establishing protection for the remains of Native Americans.
7. This Kentucky icon's resume includes terms in the US House and Senate, as well as Secretary of State. Who is this three-time presidential candidate known as "The Great Compromiser"?

Henry Clay had a long and distinguished career which earned him nicknames like "Harry of the West" and "The Western Star." Along with Daniel Webster and John C. Calhoun, Clay formed the "Great Triumvirate" of American politics, which influenced national policies for 40 years.

In 1839 he famously declared in the Senate, "I would rather be right than president." His compromises on critical sectional issues may have delayed the start of the Civil War for 40 years.
8. Benedict Arnold is infamous for being a traitor in the American Revolution. But who was the British major who was executed as a spy after assisting Arnold's efforts to surrender West Point to the British?

John André was born in London to a Swiss father and a Parisian mother. He was highly regarded among colonists of Philadelphia and New York while those cities were under occupation by British troops during the Revolution.

André was found guilty of being a spy because he was captured wearing civilian clothing and traveling under an assumed name. Although he appealed to George Washington for a firing squad, his fate was to be hanged.
9. Who won the Triple Crown in 1941?

Ridden by Eddie Arcaro, Whirlaway was the first of four Triple Crown winners of the 1940s, the only decade of the 20th Century to have four winners. The others were Count Fleet (1943), Assault (1946), and 1948's Citation, also ridden by Arcaro.

In 1963 Chateaugay won the Kentucky Derby and Belmont Stakes, but finished second in the Preakness.

Holiday won the Preakness Stakes in 1914, but did not run in the Kentucky Derby or Belmont.

Dennis was more of a singer than a thoroughbred.
10. I loved this guy's role as Ned Broy in "Michael Collins." Who is this actor from Northern Ireland who is a veteran of over 80 films and TV series and who was nominated for Best Actor in 1992's "The Crying Game"?

Stephen Rea's name does not rhyme with Dennis Day, but I'm keeping him in the quiz because I enjoy his acting.

Stephen Rea acted with Colm Meany in Dublin's Focus Company while learning his trade. He was nominated for a Best Actor Tony Award in 1993 for his role in "Someone Who'll Watch over Me." In his personal life, he had a 20-year marriage with Delours Price, a former Provisional IRA bomber.
Source: Author shvdotr 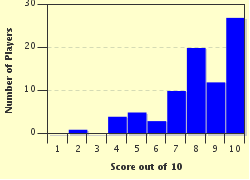 Related Quizzes
This quiz is part of series "It's Not a..." Quiz List:

Actually, it IS a Quiz List. It is based on a series of quizzes with "It's Not a..." in the title. I'll tell you what it is not, and you need to discover what it IS!