The Jewish people have often been quite involved with the surrounding cultures and have produced many famous people in different fields. Which ones do you recognize?

Bob Gibson was a fierce competitor for the St. Louis Cardinals of baseball.
Bobby Fisher was a famous chess grandmaster.
Rob Thomas was a singer and writer was born after Woodstock.
2. This Nobel Prize laureate was a patent clerk before he was recognized for his breakout theory in physics.

Ben Gurion was the first prime minister of the modern state of Israel.
Einstein, among many things he did in his life, had been approached to serve as president of Israel.
Moses led the Children of Israel out of Egypt.
Carl Jung was a famous psychologist who studied with Freud and then broke away and developed his own theory of psychology.
3. He revolutionized the way people look at the human psyche.

Two of his students went on to create their own schools of psychology were Alfred Adler and Viktor Frankl. Frankl went on to write the world famous bestseller, "Man's Search for Meaning".

Although while working in entertainment Goldwin and Goodman could touch people's souls, they were of course not psychologists.

Cy Young was one of the greatest pitchers in major league baseball history and has the award for best pitcher named for him.
4. Who was the LA Dodger's pitcher who wouldn't pitch in a World Series game because it occurred on Yom Kippur, a Jewish holiday?

Koufax' decision not to pitch game 1 of the 1965 World Series is still remembered and discussed 50 years later!

Ken Holtzman, pitching for the Cubs, actually pitched against Koufax. Holtzman, in 1966, threw a no-hitter for 8 innings and beat Koufax in a regular season game, 2-1, the day after they both attended synagogue services on Yom Kippur.

Hank Greenberg was a slugger for the Tigers hitting over 500 home runs. He also sat out a game during the 1934 pennant race because it fell on Yom Kippur.

Art Shamsky played in MLB starting with the Reds during that famous '65 season and was part of the Mets '69 championship team. In '69, Shamsky, too, didn't play in a regular season doubleheader because - yes, you got it - it fell on Yom Kippur.
5. Richard Nixon's Secretary of State was this statesman.

Kissinger had his own brand of international bargaining which was known as "shuttle diplomacy", shuttling back and forth between countries.

The others were all Israeli politicians.
Abba Eban served as Israel's ambassador to the un.
Moshe Dayan the famous eye-patched minister of defense.
Golda Meir was the country's first woman prime minister.
6. A Jewish swimmer for the American Olympics team of the 70s. Who was it?

Topol played but on the silver screen in "Fiddler on the Roof".
Caspi played in the NBA.
Balfour was a British English politician who signed the famous Balfour Declaration recognizing the need for a Jewish homeland.
7. This multi-talented singer/actress has won many entertainment awards. She also portrayed Yentl, a Jewish girl growing up in a European town.

Streisand is so good that even in 2015, in her 70s she was still nominated for a Grammy. She is also a philanthropist.

Peer is on the pro tennis circuit.
Steinem was a leader of the feminist movement.
Lewinsky 'worked' with Bill Clinton.
8. This Rat Pack singer/actor/entertainer who converted to Judaism also appeared in "All in the Family".

Davis has also been called 'Mr Entertainment' and 'Mr. Show Biz'.
He performed with fellow rat-pack member Dean Martin on numerous occasions and played golf with Jack Benny.
Humphrey Bogart was in a previous incarnation of the rat-pack together with Lauren Bacall.
9. Arguably one of the funniest men in the movies, he and his brothers wrote comic hits such as Duck Soup.

Though all were in entertainment, there was no parallel to the Marx Brothers.

Stan Laurel was part of the Laurel and Hardy team. (I watched Babes in Toyland every year in December).
Jackie Gleason will always be a honeymooner in my eyes.
Eddie Murphy is funny whoever you put him with.
10. He wrote the score for the musical 'West Side Story'?

Great music. He wrote more than a score of scores.
Paul Simon was teamed with Art Garfunkel for years, their signature song being 'Sounds of Silence'.
Mendelssohn (always loved that double 's') wrote classical music.
Cohen wrote the original 'Halleluyah' that appeared in Shrek among other places.
Source: Author grisham 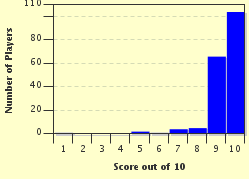 
Other Destinations
Explore Other Quizzes by grisham