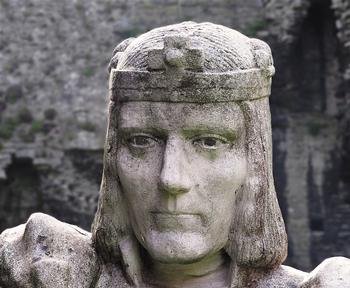 Edward III is one of my favorite kings as he did so much for his country. I hope this little quiz will give encourage you to find out more about him.

Quiz Answer Key and Fun Facts
1. Edward, son of the weak Edward II, was one of the greatest kings England ever had. This splendid warrior was crowned in 1327 after his father's abdication (and subsequent murder). How old was the teen prince when he became king?

He already knew what he wanted and how to get it and he was, above all, patient.
2. The first years of Edward's reign were placed under the control of a council of barons and of the court dominated by the proud Mortimer. Who led the barons?

Henry of Lancaster was the brother of Thomas of Lancaster decapitated sooner by Edward II. Gaunt, Langley and Woodstock were all sons of Edward III.
3. Once Edward seized the power for good, what happened to the Lord Protector Roger Mortimer?


Answer: He was hanged

Edward could not forgive Mortimer his arrogance and his desire to be king.
4. In 1348, Edward decided to promote and glorify knighthood by establishing a famous order of chivalry. What was it?


Answer: Knights of the Garter

The order counted 26 members chosen from the king's most faithful supporters.
5. In 1333, Edward and his well disciplined army won an important battle at Halidon Hill. Which adversary did they defeat?

After the Treaty of Northampton in 1328 by which Scotland asserted its independence, the Scots kept quiet for a while. Unfortunately, their leader Robert the Bruce, died the following year leaving Scotland to his young son David. Edward saw the occasion to play the Baillol against the Bruce (like his grand-father did).

As the Scots had continued their raids into the North, this matter had to be settled on the battlefield, hence this battle.
6. The death of Charles IV of France (1328) - who had no heir - gave Edward a very respectable claim to the Kingdom of France through his mother Isabelle, Charles's sister. Who replaced Charles on the throne?

Philippe VI was the son of Charles de Valois, the brother of King Philippe IV le Bel (the Fair). When Philippe IV died, his three sons succeeded him (Louis X, Philippe V and Charles IV) but none of them produced an heir.
7. After a series of unsuccessful and expensive attempts to seize the French crown, the wind finally turned for Edward when in 1345 one of his greatest soldiers retook most of Gascony and gave Edward the encouragement he needed to prepare his army for the invasion of France. Who was this hero soldier?

Henry of Monmouth was in fact the future Henry V, the Black Prince was Edward's eldest son also a great warrior. John de Montfort was the son-in-law of Edward, he had married his daughter Mary.
8. In 1346 the English, though heavily outnumbered by the French, won the battle of Crecy. What was the decisive element in this battle, the one that tilted the scales in favor of the English?

The English archers used long bows which allowed them to kill the enemy while staying far from him. A chronicle of the time describes this event: 'but then, the English archers stepped forth one pace and let fly their arrows so wholly together and so thick that it seemed snow'. A most impressive sight, don't you think? At least the French seem to have thought so ...
9. The truce made after Crecy lasted till the death of Philippe VI and the accession of his ambitious and naive son Jean II. In 1356, after a fierce battle, King Jean was taken prisoner. What was the name of this battle?

Henry V defeated the French army in Agincourt in 1415. The battle of Barnet in 1471 saw the death of one of England's most intriguing characters, Warwick the Kingmaker. The battle of Bouvines in 1214 opposed Philippe Auguste of France and King John of England, this time, the French won.
10. Edward the Black Prince, heir to the English throne, died in 1376, one year before his father. Richard II was the next in line to be king. What was his link with Edward?

Richard was the son of the Black Prince and of Joan of Kent.
Source: Author gywalgi 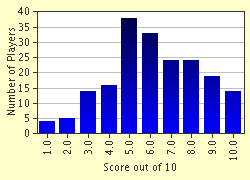 
Other Destinations
Explore Other Quizzes by gywalgi

Go to House of Plantagenet Quizzes