In the past 100 years we have had quite a number of fantastic photographic artists to admire. I will describe 10 of them below and you try to decipher which artist I'm referring to...good luck!

Quiz Answer Key and Fun Facts
1. Which U.S. photographer worked for Harper's Bazaar magazine in New York in the mid-1940s before becoming one of the highest-paid commercial photographers?

Though he is best known for his fashion photographs, Avedon has also explored the art of photography in more subtle ways as well...for example with his explorations of aging.
2. Who was the famous "Life magazine" photographer who took photos of Gandhi?

In the film "Gandhi" you may remember that Margaret Bourke-White was portrayed by Candice Bergen.
3. Which photographer was famous for pictures of poor folks, such as the photo 'Migrant Mother', during the Great Depression?

Lange's photos are very memorable, and helped put a face on the Great Depression. The photo called 'Migrant Mother' is certainly the most famous of her many wonderful photographs.
4. Considered perhaps the greatest photographic artist of all time, he did documentary work in black and white, using a small camera format. Who was this famous Frenchman?

Cartier-Bresson's 1952 book is entitled "The Decisive Moment", which he always tries to capture in his photographs. He's also famous as a photographer of the many scenes of Paris.
5. Who was the famous American photographer known for their 'identical twins' photograph and for a photo of a small boy holding a hand grenade?

The work that is probably most haunting, "Child with Toy Hand Grenade in Central Park, New York City" in her oEUvre also best exemplifies her attempts to find the bridge between the real world and imaginary.
6. American photographer Alfred Stieglitz was married to which famous artist?

Alfred Stieglitz was the creator of many memorable photographic impressions. One very famous photo called "The Steerage" has come, in many minds, to represent the immigrant experience of taking off in a ship for the high seas. Oddly though, this photo is in fact not a photo of immigrants, but rather of a group of second class travellers aboard the Kaiser Wilhelm II.
7. What was the name of the book of photographs published by Robert Frank in Paris in 1958 that was nearly unanimously panned by critics?

"Les Americains" or (The Americans) was not well received by critics, it eventually caught a hold with the public and became a landmark work of photographic art.
8. Who is the modern American photographer who, in the spirit of the motion picture, creates narrative photographic sequences, such as their "Death Comes to the Old Lady"?

Duane Michaels' work is obviously influenced by the art of the Surrealists, but goes a bit further than the Surrealists were able with his story telling techniques. I highly recommend taking a look at some of his pieces!
9. He was famous for photographic portraits of Lillian Gish, Rodin, Greta Garbo, and others. Who was this 20th century American photographer?

Steichen was influenced by Stieglitz but eventually found his own identity as a portraitist. He also worked for "Vanity Fair" and "Vogue" during his career, which included a stint as the director of the photographic arts at the NY MOMA.
10. Which photographer is probably most famous for his dramatic landscapes of the American West?

Ansel Adams is the photographic artist who best captured the beautiful, rugged landscape of the American West. His work always brings nostalgic sighs to those among us who grew up in the rural areas of the West but now live in the big cities! Thank you for giving this quiz a try!
Source: Author thejazzkickazz 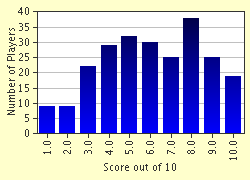 Related Quizzes
This quiz is part of series The Eyes Behind the Camera:

A few quizzes about famous photographers.