Welcome to the Hotel California, where you're likely to spot some of the most famous Californians in history. You might as well stay a while--it's such a lovely place.

Quiz Answer Key and Fun Facts
1. Lobby's full again, a hazy cloud in the air--all the cool cats gather at the Hotel California. Look! To the left, that writer guy. He's holding some sort of medals: a Nobel on closer inspection, and what's that other one? P-something. Pulitzer, that's it. He's a vulgar one though, and a bit crazy. He keeps going on and on about nonsense: California is not exactly east of Eden, mice are certainly not men, and grapes don't exactly get angry. Oh, you remember his name now, you say. Well, what is it?

Steinbeck, that was it. Yes, I remember now. That Nobel was in literature, as I recall and his Pulitzer was for that one book "The Grapes of Wrath". He wrote "Of Mice and Men" and "East of Eden" also. Vulgar? Well, I wouldn't say his books are necessarily vulgar, but "Of Mice and Men" always gets those censor people on his back. Yeah, they don't like that offensive language, or at least what they call offensive.
2. Well, well...didn't expect to see him here. Yeah, Oscar. Well, de la Hoya if you really need to know his last name. So he decided to show up again. "What did he do?" you ask. Only knocked some guy's brains out last time. He sure is one tough guy. A boxer? Well, yes but that's such a crude word. No...he's a--what's that called again?

Ah yes, pugilism is the word that means boxing. No gloves that last time, but pugilists don't always need gloves. Some prefer to fight without them, you know. And Oscar, well he's a fierce one even for a guy who's considered a "light middleweight". Nothing light about that swing though.
3. Don't look behind you! Why did you look? Great, now he's coming. Who? You know who that is. Just wonderful, now you've "made his day". I mean he was practically begging you to, but you did. Go ahead, talk to him. His name? You forgot his name? He's famous, practically done everything: act, direct, produce. No, his name isn't Harry. He's not dirty! Oh goodness, he's almost here. Quick, what is his name?

Phew! That was a close one. Clint Eastwood, yes. Does "Sudden Impact" ring any bells? Why, yes that was the film that had the line "Go ahead, make my day". No it wasn't the first film "Dirty Harry". Well, his character is named Dirty Harry, but it was the fourth film that had the line in it.
4. Sometimes politicians make it in here and there's one in the corner now. Adlai Stevenson, poor fellow. He's alone because everyone thinks they might get some bad luck if they talk to him. Why? He lost two presidential elections, that's why. Plus later, in 1960, he didn't even secure his party's nomination after a third run. I can't remember who he lost to in all three cases. You're good with politics, aren't you? Who were his three losses to?

Yes, he lost to Eisenhower twice. That has to be rough. When he tried running for a third time, I guess the Democrats didn't think he could win because they nominated Kennedy instead. Well, it wasn't all bad. Kennedy did offer him the spot as ambassador to the United Nations.

Some people here don't really think he belongs here in the Hotel California, though. Why? He spent much of his time in Illinois.
5. Who's that arguing with the hotel clerk? Oh him, yes, "Citizen Kane" himself, or at least that's what people around here like to call him. Don't let him catch you saying that, though. No, he wasn't in the movie; we call him that because everyone thinks the movie was about him. Newspaper mogul, U.S. Representative, art collector, he's done just about everything. He has that whole three name thing going for him. What is it?

Talk about a California big shot. Yes, he did move to the East Coast much his life, but California has always been his true home. I mean, he built a castle here. Not a real castle, not even Xanadu, but the Hearst Castle. It's a bit of a landmark these days.
6. You see that snazzy computer at the front desk? Steve Jobs gave them that. He just couldn't stay in a hotel that used computers from another company. I can't quite make out that logo, though. What is it?


Answer: An apple with a bite taken out of it

Oh yes, Apple--that's the company. Steve nearly gave us all iPhones and iPods and iPads and MacBooks, and well, who knows what else Apple makes. He could certainly afford it; he's worth billions, you know.
7. Well, if it isn't Old Blood and Guts. I haven't seen him in a while; he's been commanding troops overseas. Didn't you hear what he did? Slapped some poor soldier at a hospital suffering from fatigue, called him a coward. But I've forgotten the general's name...can you help me out?

Patton slapped that soldier and Eisenhower was forced to relieve him. Didn't even get to participate in the Normandy landings. But that man's always been a bit of a loose cannon. And he really seemed to despise those Soviets. Never trusted them for a second.
8. Take a look at that scientist-type on the couch over there. Luis Alvarez. He's a big shot, that one. Done so many things with science, I don't even know what they are. Oh, he was only bragging the other day about nuclear magnetic resonance and military radar differentiation technology. He's X-rayed the Pyramids and was involved in the Manhattan Project, too. He won the Nobel; what field was that in?

Boy, that Alvarez sure was a modern day Renaissance man if I ever heard of one. He's been involved in so many things. Did you know he once worked with his son to determine how the dinosaurs died? He was one of the first people to think they were all wiped out by a comet or asteroid, or some big rock that hit the earth.
9. There she is! Oh, you won't believe how many eyes turn when that blonde bombshell walks in. What's her name? Norma? No, no that can't be it, can it? She's an actress. Norma's no name for an actress. Well, geez, what is her name?

Norma Jean Baker is Marilyn Monroe...yes, that's right. And what a bombshell she was. But she was no dumbbell like some people liked to think. Just watch her film "Bus Stop", and you'll see she was no idiot. Sometimes she played one, but no one is who they pretend to be.
10. You hear the jazz in the air? Why it's another Californian's music, his quartet's anyway. Dave Brubeck is his name; he's right over there. The song that's playing? Can't remember the name, but it was in that movie "Pleasantville". It's written in quintuple time, which the song is named after. Man is that a great fifties song or what? You know the name don't you? What is it?

"Take Five" is quite the tune, don't you think? It uses quintuple time, which is kind of odd! Quintuple time--that's 5/4 time. And that Brubeck is known for writing a bunch of jazz standards. You should really look into his music--it's really terrific.
Source: Author trident 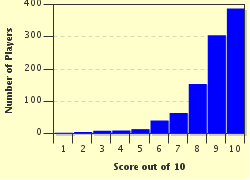