The song 'Come on Eileen' by Dexy's Midnight Runners includes the line 'Toora loora toora loo-rye-aye'. There are many other songs with equally meaningless lyrics, and this quiz covers some of the songs, singers and writers of them.

Quiz Answer Key and Fun Facts
1. 'Dum-dum-dum-dummy-doo-wah' is the first line of which Roy Orbison hit?


Answer: Only the Lonely

'Only the Lonely' was a huge hit in 1960, reaching number one in the UK and number two on the USA Billboard top 100 chart. The line is repeated throughout the song by the backing singers. All the options are Orbison songs. Roy Orbison died in 1988 following a heart attack at the age of only 52.
2. The Beatles wrote the song 'Ob-La-Di, Ob-La-Da', but which group took it to number one in the UK charts in 1968?

Although credited to Lennon/McCartney, the song was written primarily by Paul, and John is reputed to have disliked it. It originally appeared on 'The White Album'. The Marmalade version was also a singles hit in Austria, Norway and Switzerland. The other group names are all real groups. Jam was led by Paul Weller, Hot Chocolate by Erroll Brown and Cream were Eric Clapton, Ginger Baker and Jack Bruce.
3. 'Do Wah Diddy Diddy' reached the number one spot in 1964 in both the UK and USA for Manfred Mann. Who was the lead singer on the record?

The song was at number one on the Billboard Hot 100 for two weeks in October 1964, having had two weeks in the same position in August 1964. Manfred Mann himself was the keyboard player. Paul Jones left the group in 1966 and was replaced by Mike D'Abo.

The group continued to be successful following the change of singer. Brian Jones was in 'The Rolling Stones' and Tom and Howard Jones are both solo artists.
4. Many songs have lyrics which include versions of 'la la la'. Which of these does NOT?


Answer: Strangers in the Night

There are just so many great Sinatra songs to choose from, but 'dooby dooby do' is from 'Strangers in the Night'. It was written by Ivo Robic in Croatian and English lyrics were added by Charles Singleton and Eddie Snyder. Sinatra himself is said to have hated the song. Despite this, it was a number one hit for him in 1966 in both the UK and USA.
6. 'Da doo ron ron' was a huge hit in 1963 for 'The Crystals'. Who was one of the writers of the song?

The song is credited to Jeff Barry, Ellie Greenwich and Phil Spector and was produced by Spector in his 'Wall of Sound' style. It reached number five on the UK singles chart and number 3 on the Billboard Hot 100 chart. Phil Spector was jailed for murder in 2009 following the death, by shooting, of an actress in his home in 2003.
7. Alvin Stardust made number 2 in 1973 on the UK charts with 'My Coo-ca-choo'. He had previously made the UK charts in the early 1960s under which name?

Alvin Stardust was born Bernard Jewry. Shane Fenton and The Fentones had some minor UK chart success, notably with 'I'm a Moody Guy' which reached number 22 in 1961 and 'Cindy's Birthday' which was a 1962 number 19 hit. Shane then reinvented himself as more of a 'glam rocker' as Alvin Stardust with rather more success.

The other options were all singers of the same era as the Fenton incarnation.
8. 'MMMBop' was a number one hit in 1997 for which group?

The group comprised three brothers, Isaac, Taylor and Zac Hanson. 'MMMBop' is their best-selling single by far, although the group continues to record. It reached the number one spot in the UK, USA, Australia and Germany and several other European countries. The other three groups also had big hits in 1997.
9. Cher's version of 'The Shoop Shoop Song (It's in his Kiss)' featured on the soundtrack of which film?

Cher starred in all the films given as options, but it was 'Mermaids' which included this song in 1990. The video showed her co-stars from the film, Winona Ryder and Christina Ricci, singing the backing vocals. The song was originally a hit in 1964 for singer Betty Everett.
10. 'Lie la lie, lie la lie la lie la lie' is a recurring refrain in which Simon and Garfunkel song?

'I am just a poor boy, though my story's seldom told' are the opening lines of the song, with the chorus of 'lie la lie' after each verse. The song tells the story of a young man trying to make his way in New York against a background of loneliness and poverty. The single made number seven on the US Hot 100 charts and number six in the UK in 1969.
Source: Author rossian 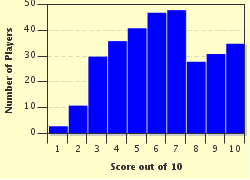 The first batch of the many quizzes I've written for the various commissions in the Author Lounge, with titles dreamed up by other players.


1. Better Living Through Chemistry Average
2. Rossian and the Unicorn Tapestries Average
3. Come on Eileen Average
4. Deride and Prejudice Average
5. Perfect Understanding Average
6. Yours Truly, It's Yours Average
7. So That's What You Do With A Mars Bar Average
8. Ten Times Four is Forty Average
9. Why Don't Sheep Shrink When it Rains? Average
10. Lost in Spain Average
11. Frankly, My Dear, I Don't Give a ... Average
12. Under the Covers Average