Ray Walston and Bill Bixby are not included here. These questions are people named Martin, not Martians! Have fun!

Quiz Answer Key and Fun Facts
1. "What we have here is failure to communicate" is a famous line from the film "Cool Hand Luke." Which veteran character actor delivered this line so well and so often in his role as warden, or "Captain" over the prisoners in a Florida penitentiary and starring Paul Newman?

Best known for roles in Westerns, Strother Martin made over twenty television appearances between 1956 and 1977, including five on "Bonanza". He appeared in 50 movies between 1950 and 1980, including five of John Wayne's films, such as "McLintock!", "The Man Who Shot Liberty Valance", "True Grit", and "Rooster Cogburn".
2. Several Martins are well known in comedy circles. One was an outstanding banjo player and stand up comedian who started out as a writer for "The Smothers Brothers Comedy Hour". Who was this wild and crazy guy who also starred on the big screen in "The Jerk" and "Roxanne", for which he also co-wrote the screenplays?

Steve Martin's banjo playing is so good that he has appeared many times in concert, both solo and with groups. The 2002 Grammy Award for Best Country Instrumental Performance went to Earl Scruggs' remake of "Foggy Mountain Breakdown" in which Martin played the banjo.

He has also won a Grammy for Best Blue Grass Album, as well as one for Best American Roots Song, in addition for two Grammys for comedy albums.
3. If I say, "Peter Pan", "South Pacific", and "Annie, Get Your Gun", would the name Martin come to mind? It should, because one of our Martins won awards for performing leads in these Broadway shows. Who would that be?

Mary was inducted into the American Theater Hall of Fame in 1973 and honored in the 1989 Kennedy Center Honors for her career achievements. Larry Hagman is her son. Mary Martin passed away in 1990.
4. The "tin" in this Martin's name sounds more like "tan" than "tin." For 21 years he was a real devil in New Jersey, winning three Stanley Cups. Who is it?

Brodeur was born in Montreal, the son of Denis Brodeur, who won a bronze medal as goalie for Team Canada in the 1956 Olympics and played senior hockey for ten years, without getting into the NHL. Martin switched from forward to goalie at the age of seven. He played in four Winter Olympics and was an NHL All-Star nine times. He held over 25 NHL records.
5. In addition to being Jerry Lewis' comedy partner early in his career, this Martin appeared in over 60 motion pictures. But his best asset was his spectacular voice, recording over 100 albums. He was probably best known for "Everybody Loves Somebody." Who is this crooner and star of film and TV?

Dean was born Dino Martin Crocetti in Steubenville, Ohio, which still holds an annual Dean Martin Festival. One of Dean's most memorable projects toward the end of his career was TV's Dean Martin Celebrity Roast, presented by NBC from 1974 to 1984.
6. "High-strung" and "feisty" would no doubt describe this hard-living, hard-playing baseball personality. The Yankees retired his number 1 and he managed the Bronx Bombers on five different occasions, along with four other teams. Who was he?

As a player, Billy was known as a hard drinker and had a reputation for being in many fights. He played on four World Series winning teams for the Yankees. Billy died on Christmas Day of 1989.
7. This Martin was a winner in over 90 NASCAR races, as well as winning nine tour titles. Who was this Arkansas-born racer and member of the 2015 class of the Motorsports Hall of Fame?

In 1998 Mark Martin was listed by NASCAR as one of its 50 Greatest Drivers of All Time.

Charlie Martin is in the Nebraska Auto Racing Hall of Fame. Martin Pedroza is a Panamanian-born jockey and is in the National Museum of Racing and Hall of Fame in Saratoga Springs, New York. While not a racer, Martin Milner was connected with cars in his TV shows of "Route 66" and "Adam-12".
8. This Martin is a long-time actor whose filmography runs from 1949 to 1997. You may remember him as Juror #1 in "Twelve Angry Men", or as Mr. Merriweather in "Little Big Man". In 1966 he won an Oscar for Best Supporting Actor in "A Thousand Clowns" in his role as Arnold Burns. Which Martin was he?

In 1968 Martin Balsam also won a Tony for his role in "You Know I Can't Hear You When the Water's Running". His first major award came in 1964 from the National Board of Review, again for Best Supporting Actor for his role of Bernard B. Norman in "The Carpetbaggers". He died from a stroke in 1996 while on vacation in Rome.
9. If you are "Livin' la Vida Loca", you are no doubt singing along with this Puerto Rican star and former member of Menudo who also did a stint on "General Hospital" as, what else but a Puerto Rican singer. Who is this owner of 95 platinum records and eleven #1 songs?

Ricky joined Menudo at age 13 and remained in the group until he was 17. A song ("La copa de la vida") he wrote for, and performed at, the 1998 soccer World Cup in France was named Pop Song of the Year in 1999.
10. This Martin is the prolific author of a series of fantasy novels called "A Song of Ice and Fire". The first novel of the series, "A Game of Thrones", published in 1996, was adapted by HBO for its TV series, "Game of Thrones". Who is this author who has been called "an American Tolkien"?

George R.R. Martin includes half a dozen Hugo Awards among the 20 Awards from his writing. Martin was also heavily involved in the HBO TV series based on his books, and the first two seasons of the series won 8 Emmy Awards.
Source: Author shvdotr 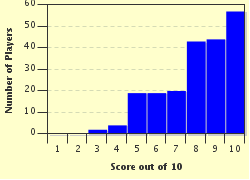 Related Quizzes
1. Questions about 'Q' People Average
2. People With Animal Names Tough
3. People That Rhyme Average
4. Neither Tom nor Harry Average
5. Remember Me? -B- Average
6. A Price Above Rubies Easier
7. Not Quite a "Kyle" Average
8. Robert, Louis, or Stevenson? Average
9. Who the Fox are these People? Difficult
10. People with Fishy Names Tough
11. People with Alliterative Names: A-J Average
12. The Name Says It All Tough