How come more women don't have nicknames? Pick the correct answers for the few who do.

It seems Henry had a fondness for Annes and Catherines (with Jane Seymour in the middle), but this was his 4th wife, Anne of Cleves, whom he married in 1540. Since most questions about Henry's wives seem to center on 2nd wife Anne Boleyn, I thought some time should be given to the 'other' Anne.

Not only did the King call Anne 'a Flanders mare', but he told his courtiers that he was unable to perform his husbandly duties due to her appearance. Because of Henry's wishes, Anne agreed to a quick annulment; he was grateful and, rather than meeting the fate of many of his ex-wives, Anne was given a generous income and homes.

She lived out her life as an independent woman.
2. Who was the first to be called "America's Sweetheart"?

Yes, I know Julia Roberts starred in a film called "America's Sweetheart", and Sandra Bullock has also been given that appellation but, ironically, it was Canadian born actress Mary Pickford who was the very first to be given this nickname. I will tell you that this title has, to this point, been granted to 2,793 women of different nationalities since 1914, but "Little Mary", the "girl with the curls", wife of Douglas Fairbanks, and winner of the second Academy Award for Best Actress in 1930 for her first sound film "Coquette", was the very first! She was also a co-founder of United Artists and a founder of the Academy of Motion Picture Arts and Sciences.
3. Which woman earned the nickname "Angel of the Battlefield"?

During the Civil War, it was Clarissa "Clara" Harlowe Barton (1821-1912) who came to the aid of the soldiers. She collected provisions and medical supplies for the Union Army, and tended to the wounded. Barton, however, did not rest on her laurels and, after the war, she founded the American Red Cross (at 60 years of age) in 1881 and became its first president.

She led the American Red Cross for 23 years and helped make it what it is to this day. By the way, if you picked Florence Nightingale (1820-1910), she was also a nurse, but during the Crimean War in 1854, and her nickname was "The Lady with the Lamp".
4. What was the nickname of athlete Mildred Ella Didrikson Zaharias?

"Babe" Didrikson Zarharias (1911-1956) was named "Woman Athlete of the Half Century" by the Associated Press in 1950 for her athletic prowess in track and field, basketball and golf. When she was a child, she hit 5 homeruns in one baseball game which earned her the nickname "Babe"; this stuck with her for life.

In the summer games of the Xth Olympiad held in Los Angeles, California during the Great Depression, she won medals in the hurdles, javelin and high jump. At the time, women were only allowed to enter 3 events and she won 3 medals and broke 4 world records.

By the following decade, she had become the greatest woman golfer of all time.
5. Who was destined to become the "Maid of Orleans"?

In researching this question, I was unable to find any other famous people from Orleans, France (or born in Domrťmy), so all the incorrect choices are women from New Orleans, Louisiana. Joan of Arc was born in (or about) 1412 in Domrťmy in north-east France.

While still in her teens Joan began having visions of the Archangel Michael and Saints Margaret and Catherine telling her to support Charles VII (the Dauphin) and free France from English rule during the Hundred Years' War. She was victorious at the siege of Orleans, helped Charles become King, was captured on May 23, 1430 and burned at the stake on May 30, 1431.
6. Which singer was nicknamed "The Swedish Nightingale"?

Johanna "Jenny" Maria Lind (1820-1887) was a famous opera singer. Lind was a soprano, famous in Sweden and across Europe and became a member of The Royal Swedish Academy of Music in 1840. At the invitation of that premier showman P.T. Barnum, she was induced to abandon her retirement plans and come to America to perform.

She earned more than $350,000 from these concerts; to give you a perspective of the size of that sum in 1850, calculating its value today (by the percentage increase in the CPI from 1850 on) it would be worth somewhere around $7,870,000! She contributed the proceeds to charities, principally to help build free schools in Sweden.
7. Who was called "The First Lady of Song"?

The incorrect choices above include Billie Holiday (known as "Lady Day"), Ruth Brown (sometimes called "The Queen of R&B") and Mahalia Jackson ("Queen of Gospel"), but it is Ella Fitzgerald (1917-1996) who has been crowned "The First Lady of Song", along with other epithets like "Queen of Jazz" and "Lady Ella".

She was known for her purity of tone and her "scat singing". Like others of that era, she began with a band, the Chick Webb Orchestra, and became famous for her version of "A-Tisket, A-Tasket".

She then went solo but collaborated with e.g., Louis Armstrong, Duke Ellington and The Ink Spots. 1993 was her last public performance; she died three years later.
8. Which woman was nicknamed "The Belle of Amherst"?

Although all the incorrect choices are renowned poets, Emily Dickinson (1830-1886) was called the "Belle of Amherst", having been born and lived her life in Amherst (duh!), Massachusetts, without ever achieving success while she was alive. She lived a reclusive life, studying at the Amherst Academy and Mount Holyoke Female Seminary, but her neighbors thought she was strange; she was reluctant to meet people and, in her later life, she rarely left her room.

Despite that, she is now known to be one of this country's greatest poets. Ending with her own words: "Parting is all we know of heaven and all we need of hell" and "Because I could not stop for death, / He kindly stopped for me."
9. Who was called "The Moses of her people"?

Born Araminta Ross, Harriet Tubman (1822-1913) was a black abolitionist, humanitarian and, in the Civil War, a Union spy. She was born a slave in Maryland but escaped to Philadelphia in 1849; however, she returned 'home' immediately in order to rescue her family.

She continued to return to bring her relatives to freedom. Eventually, she guided many other slaves out of Maryland at night and in secret on what became known as the "Underground Railroad", and she took great pride in the fact that "she never lost a passenger". During the Civil War, she became the first woman to lead an armed expedition where more than 700 slaves were liberated. "Black Moses", indeed!
10. Much to her dismay, which lady was dubbed "Lady Lindy"?

With the exception of Amelia Earhart, how many female pilots can you name? Did you know that all of the incorrect choices were also pilots? Harriet Quimby (1875-1912) was the first woman to gain a pilot's license in the US. Bessie Coleman (1892-1926) was the first African-American to hold an international pilot license, and Lt. Col. Jacqueline Cochran (1906-1980) was considered one of the greatest racing pilots of her generation. (I still think Zefram Cochran of "Star Trek" fame was named after her.) As for Amelia (1897-?), she was the first female aviator to fly solo across the Atlantic Ocean. Sadly, she disappeared on July 2, 1937 while flying over the Pacific Ocean.
Source: Author nyirene330 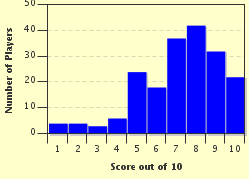