I found too many people connected to the great state of Indiana to do just one quiz. So here's the second installment. I hope you like it.

Quiz Answer Key and Fun Facts
1. Many people consider him to be a myth, but which folk hero really lived, and is now buried in Fort Wayne?

There are several differences between John Chapman, the man and Johnny Appleseed, the folk hero. Chapman planted orchards in order to improve the land and sell it for a profit. At the time of his death, he owned 1200 acres of valuable land. The apples he cultivated weren't considered fit to eat. That fruit was for cider and applejack.

The bare feet and funny clothes were true. He was an animal rights advocate and a vegetarian a century and a half before it became popular. He spread his religious beliefs as he traveled tending his nurseries.

"Do not worry at being worried; but accept worry peacefully. Difficult but not impossible." - John Chapman
2. Which Vincennes born vaudevillian, comedian, clown, actor, painter, and host had a show that ran on CBS from 1951 to 1971?

Richard Bernard "Red" Skelton was probably most famous for his various characters. These included:

Freddie the Freeloader was a kind hearted bum.

Clem Kadiddlehopper was a dim-witted country bumpkin that still managed to get one over on sophisticated people.

And Gertrude and Heathcliff were two silly seagulls.

"All men make mistakes, but married men find out about them sooner." - Red Skelton
3. What Dale born sitcom actress was the first woman to guest host "The Tonight Show"?

Florence Henderson began her career on Broadway starring in shows such as "Oklahoma" and "The Girl Who Came To Supper." She is best known for her part as Carol Brady in somewhat corny, but much beloved TV show "The Brady Bunch." Later she had her own variety show and became a producer.

"I had four children. And my youngest when we started was like, oh, gosh, 2 or a little less. And sometimes my kids would say to me, you know, how come you don't scream at those kids on television like you do us?" - Florence Henderson
4. What lasagne eater from Marion is best known for his fat, lazy, fictional cat?

The creator of "Garfield " was born in Marion, raised in Fairmount and lives in Albany. Growing up on a farm with a brother and 25 cats influenced Jim's work. Garfield is a cat and his owner Jon Arbuckle is a cartoonist who grew up on a farm and has one brother.

"Vegetables are a must on a diet. I suggest carrot cake, zucchini bread, and pumpkin pie." - Jim Davis
5. Which Indianapolis born businessman turned his family's small pharmaceutical company into a financial powerhouse?

Aside from his pharmaceutical and business interests, Lilly Was fascinated with archeology. He worked especially with Indiana prehistory. He both financially supported professional archeologists and worked the discipline himself. He had several papers published over the years even though he never had formal training in subject.

"If Eli Lilly had any interesting quotes, I can't find them." - Your Lordship
6. The granddaughter of architect Frank Lloyd Wright, which Michigan City native won a 1947 best supporting actress Oscar for "The Razor's Edge?"

Anne has the somewhat dubious distinction of being the only actress to play two different arch-villains on the 1960s TV series "Batman." She played Zelda the Great in the first season. In the third season she learned to swear in Russian so she could play Olga, Queen of the Bessarovan Cossacks. She claimed that doing that show was a "thoroughly enjoyable" experience.


"I'm an actress, not a personality. It's more successful to be a personality. But can you use it in every role? I don't spill over into everything I do. I do what I do from inside someone else's skin." - Anne Baxter
7. We can't do a quiz on Indiana without mentioning the Indianapolis 500. Three racers have won four times. Who was the first of these four-time winners?

Anthony Joseph Foyt Jr dominated the racing world. He was successful not only in Indy racing but in the Midget, Sprint, and Stock circuits as well. In 1967 he and Dan Gurney became the first Americans to win the Le Mans, a French 24 hour endurance race. A grit tough racer, during one race, a radius rod broke. Foyt grabbed the rod with one hand and won the race with the other.

"My dad was very successful running midgets in Texas. Then, his two drivers ran into some bad luck. People started saying that Daddy had lost his touch. That it was the cars and not the drivers. I wanted to race just to prove all those people wrong." - A. J. Foyt
8. Originally named William Bruce Rose Jr, what hard rocking lead singer was born February 6th, 1962, in Lafayette?

After several brushes with the law Axl was forced to leave Indiana, when police threatened to charge him as a career criminal. Axl and the band Guns N' Roses were inducted into the Rock and Roll Hall of Fame in 2012. He has lived mostly in seclusion since 1994.

"I'm late to everything. I've always wanted to have it written in my will that when I die, the coffin shows up a half hour late and says on the side, like in gold, 'Sorry I'm Late'." - Axl Rose
9. What giant rebel without a cause went east of Eden but was born in Marion?

Dean was a strange combination of Indiana farm boy, New York intellectual and California artist. He seemed to fit into all three rolls comfortably. He was probably bisexual and has come to symbolize the young man bucking the system.

"Dream as if you'll live forever, and live as if you'll die today." - James Dean
10. What legendary Notre Dame football coach urged his players in 1928 to "Win just one for the Gipper?"

Knute Rockne has the highest win-loss percentage of any coach in any sport in college history. When Rockne died in a plane crash at age 43, there was an outpouring of grief that is usually reserved only for world leaders. King Haakon VII of Norway gave Rockne a posthumous knighthood and sent his personal envoy to the funeral. The crash investigation lead to changes in airplane design and safety rules.

"We can all be geniuses because one definition of genius is the infinite capacity for taking pains." - Knute Rockne
Source: Author YourLordship 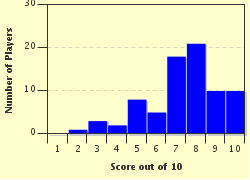 
Other Destinations
Explore Other Quizzes by YourLordship