A Hoosier is someone from the State of Indiana. These nine Hoosiers have a common connection.

Share on Facebook
Share on Twitter
Share by E-Mail
Author
Rehaberpro
Time
4 mins
Type
Multiple Choice
Quiz #
306,585
Updated
Dec 03 21
# Qns
10
Difficulty
Average
Avg Score
7 / 10
Plays
659
This quiz has 2 formats: you can play it as a or as shown below.
Scroll down to the bottom for the answer key.

Quiz Answer Key and Fun Facts
1. He was the first basketball player in history to help win an NCAA championship, to win an Olympic championship, and three NBA championships. He was an All-American at the University of Kansas and played for four NBA teams. What was his name?

Lovellette was an All-State performer at Garfield High School, an All-American at the University of Kansas, and is in the National Basketball Association's Hall of Fame. After his playing days, he became Sheriff of Vigo County.
2. As a union leader he was a principal in the Pullman strike of 1894 for which he served prison time. Later, he was imprisoned for opposing World War I but pardoned by Warren Harding. The Socialist Party nominated him for President five times.

While serving time for "impeding the United States mail" for his role in the Pullman Strike, Debs read Karl Marx for the first time and became a leader of the Socialist movement in the United States. It is reported that Clarence Darrow resigned a rewarding financial job to defend Debs.
3. Which of these is the author of the classic American novels "Sister Carrie" and "An American Tragedy"?

The theme of most of Dreiser's novels is social inequality. As a committed socialist, his non-fiction work had a similar slant. He was a newspaper journalist as well as a novelist.

Dreisler's brother Paul changed his name to Dresser and was a composer of popular music with such songs as "My Gal Sal" and "Back Home Again in Indiana".
4. Although he had a severe injury to his hand, he overcame this and became one of the most dominating pitchers of his time. He won 238 games and had a lifetime earned run average of 2.06. Who was this Hall of Fame pitcher?

In fact there were two hand accidents. In the first he lost a finger in a piece of farm machinery; in the second his third finger was permanently bent. After his baseball career, he ran a gas station until his diabetes became a problem for him.
5. He was called the "Savior of the Indianapolis 500". With his family's wealth, he helped to restore the "Indy 500" to its historic prominence. What was his family name?

The Hulman family built its fortune on a food processing factory and increased its wealth by investments in communications and real estate. In 1946 Tony Hulman bought the Indianapolis Speedway which was becoming a rapidly deteriorating structure. Hulman took over leadership from Captain Eddie Rickenbacker, a World War I flying hero, and Wilber Shaw, a distinguished racer. Tony Hulman or a member of his family, by tradition, give the "Gentlemen, start your engines!" directive.
6. Son of a coal miner, he rose to be head of the Teamsters' Union. He was often abusive and aggressive. He disappeared in 1975.

Hoffa left his coal mining family for Detroit as a young man and quickly became a union activist culminating as president of the Teamsters' Union. Because of illegal activities, he was sentenced to fifteen years in prison in 1964 but was later pardoned by President Nixon.

He disappeared in 1975 and is believed to have been murdered by the Mafia. There have been 'confessions' by some mobsters but none is considered valid.
7. Who became the 'King of Popcorn' through his line of popcorn products and his television commercials?

Redenbacher made his initial fortune through manufacturing fertilizer but fullfilled a lifetime interest in the development, distribution, and marketing of hybrid popcorn. Although the business was sold to Hunts in 1976, and despite the fact that he died in 1995, his image has remained in use in advertising.
8. After playing the piano for several bands in the big band era, he went on to from his own popular band. He is often given credit for creating 'cool jazz'. "Snowfall" is a jazz classic. Who was he?

Thornhill's "Snowfall" (1941) has been recorded by other artists thirty times. At various times he played for Artie Shaw, Paul Whiteman, and Benny Goodman before forming his own big band.
9. No list of professional basketball players would be complete without his name. In his career with the Boston Celtics he averaged 24 points, 10 rebounds, shot 50% from the field, and 89% from the foul line.

Bird met Magic Johnson for the first time when Indiana State played Michigan
State for the NCAA championship, which Michigan won. The argument as to whether Bird or Johnson was a better player continues.
10. Which of these cities in Indiana means 'high ground' in French?

This quiz was reviewed by FunTrivia editor bloomsby before going online.
Any errors found in FunTrivia content are routinely corrected through our feedback system.
Most Recent Scores
Dec 28 2022 : Guest 98: 9/10
Dec 10 2022 : Guest 75: 9/10 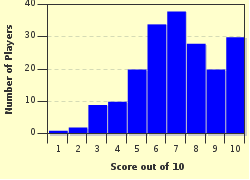