Who's a Hoosier? Trivia Quiz

Hoosier is the state nickname of Indiana and refers to people from there. Find out who's a Hoosier in this quiz!

That's right, America's favorite mother is a Hoosier! Florence Henderson was born February 14, 1934 in Dale, Indiana. She first started out on Broadway but became famous when she won the role of Carol Brady in 1969. The role also won her a spot on TV Land and Entertainment Weekly's list of Greatest TV Icons. Since her iconic role, she has hosted cooking shows and talk shows and made appearances at a Hoosier landmark - the Indianapolis 500.
2. Who is the famed author of "Cat's Cradle" (1963), "Slaughter-house Five" (1969) and "Breakfast of Champions" (1973)?

That's right, the counter-culture novelist is a Hoosier! Kurt Vonnegut was born November 11, 1922 in Indianapolis, Indiana. Vonnegut had a tumultuous life, including his mother's suicide, and he was an American prisoner of war during World War II. He survived the bombing of Dresden in a slaughter-house which the Germans called Schlachthof Fünf - this was the inspiration for his most famous novel "Slaughterhouse Five".

He was an intellectual, a pacifist, and critical of US politics, and has been called a voice of the anti-establishment generation.
3. Which hard rock singer rose to fame as leader of the band Guns N' Roses?

That's right, the bad-boy rocker is a Hoosier! Axl Rose was born as William Bruce Rose, Jr. February 6, 1962 in Fayetville, Indiana. He moved to Los Angeles and formed Guns N' Roses in 1985 with fellow Hoosier Izzy Stradlin, and Duff McKagan, Steven Adler and Slash. Rose and the band experienced immense success from 1987 through 1993 with albums "Appetite for Destruction", "G N' R Lies", "Use Your Illusion 1" and "Use Your Illusion 2". Band life was tumultuous with many members quitting and/or being fired. Guns N' Roses lived on but never with any stability. Rose and the original band were inducted into the Rock and Roll Hall of Fame in 2012, but Rose didn't attend the ceremony due to continuing hostility with band members. Oh, it's a hard life for a rock star.
4. Who was the United States Vice President who served under Woodrow Wilson and united the country with humour and morale building during World War I?

That's right, the popular Indiana Governor and VP was a Hoosier! Thomas Riley Marshall was born March 14, 1854 in North Manchester, Indiana. He served as Governor of Indiana from 1909 to 1913. Indiana was a critical state for Democrats to gain power and with Marshall's popularity, who was selected to run as Woodrow Wilson's VP, and the two took office in 1913.

He and Wilson didn't get along but Marshall was a good public speaker and delivered stirring addresses to rally the country during World War I. Marshall was also famous for his sense of humour and quick retorts. I'll leave you with his most famous joke of the what the country needed: "What this country needs is a really good five-cent cigar."
5. Which composer and songwriter rose to fame during the "Roaring Twenties" with songs "Lets Do It (Let's Fall In Love)", "You're the Top" and "Night and Day", and musicals "Kiss Me Kate" and "Can-Can"?

That's right, the popular songbird was a Hoosier! Cole Porter was born June 9, 1891 in Peru, Indiana. He was a violinist by age six, pianist by age eight and an opera writer by age ten, but he didn't see much Broadway success before World War I when he moved to Paris and lived in luxury.

He was famous for his parties with liberal drug use and gay and bisexual activities. He also married despite being homosexual. In 1928, he returned to Broadway where his musical success introduced him to Hollywood. Cole Porter has achieved continuing popularity with stars like Ella Fitzgerald, Oscar Peterson, Rosemary Clooney, Dionne Warwick and Frank Sinatra releasing albums of Cole Porter songs, as well as the 2004 film "De-Lovely" which chronicled his life.
6. Which chef and business man is famous for founding a restaurant in Kentucky despite being from Indiana?

That's right, America's favorite chicken chef was a Hoosier! Harland David Sanders was born September 9, 1890 in Henryville, Indiana. He spent the first 16 years of his life in Indiana but he dropped out of school in the seventh grade and moved from job to job.

He worked in restaurants and motels throughout the 1930s and 40s including finalizing his fried chicken recipe in 1940. Kentucky Fried Chicken was first franchised in 1952 and it was long, hard work until it took off in the 1960s. Colonel Sanders was commissioned as a Kentucky Colonel - which is a title of honour offered by the Governor of Kentucky.
7. Which American actor rose to fame with "East of Eden" and "Rebel Without a Cause" just as quickly as he died in a car crash?

That's right, America's symbol of teenage angst was a Hoosier! James Dean was born February 8, 1931 in Marion, Indiana. In 1951, he dropped out of school determined to become an actor. He was already working in commercials and TV shows and by 1954 was cast in "East of Eden" and followed that up with the popular "Rebel Without a Cause" and "Giant". James Dean was also an auto racing enthusiast, but racing to get to a race cost him his life on September 30, 1955.

But his legacy lived on since in 1956 his final film "Giant" was released and he was nominated for the first-ever posthumous Academy Award nomination for "East of Eden" and then followed that up his second posthumous Academy Award nomination for "Giant".
8. Which author of romance and paranormal novels for young adults is famous for "The Princess Diaries"?

That's right, the author who indirectly gave us Anne Hathaway is a Hoosier! Meg Cabot was born February 1, 1967 in Bloomington, Indiana. She has written "The Mediator Series" about a teenage girl who helps ghosts move on to the afterlife, the "All-American Girl" series about a student who becomes a national hero after saving the president, "The Airhead" trilogy about a book-smart student who mysteriously changes places with a supermodel, as well as other novels "How to Be Popular" and "Boy Meets Girl".

But she is most notable for "The Princess Diaries" series about an average American girl who discovers she's actually a princess in the fictional country Genovia. The first book was made into a movie in 2001 starring Anne Hathaway as Mia Thermopolis in her film debut, and a sequel was released in 2004.
9. Who is the American puzzle creator who is famous for serving as the "New York Times" crossword puzzle editor?

That's right, America's popular crossword puzzle creator is a Hoosier. Will Shortz was born August 26, 1952 in Crawfordsville, Indiana. He has a degree from Indiana University in enigmatology - the study of puzzles (and is believed to be the only person to have such a degree).

He also has a law degree from the University of Virginia. He's the founder of American Crossword Puzzle Tournament and the World Puzzle Championship. He is best known for serving as the 4th editor for the crossword puzzle in The New York Times starting in 1993.

He was also the subject of the 2006 documentary "Wordplay" which chronicles the popularity of crossword puzzles and the American Crossword Puzzle tournament.
10. Which American politician served as a Union Army General in the American Civil War but has achieved more lasting fame for his prominent facial hair and a firearm?

That's right, the person who lent his name to sideburns was a Hoosier! Ambrose Burnside was born May 23, 1824 in Liberty, Indiana. Burnside served as a general during the American Civil War, then later served as Governor and Senator of Rhode Island, he was the first president of the National Rifle Association, developed a firearm called the Burnside carbine, but who are we kidding? Ambrose Burnside is currently famous for his large strips of hair from his ears to his moustache - first called burnsides, later changed to sideburns.
Source: Author napierslogs 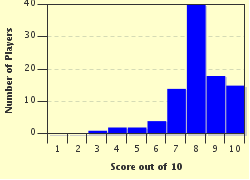 
Other Destinations
Explore Other Quizzes by napierslogs