These are just a few of the pioneers of medicine and surgery. These pioneers developed hormones, anesthetics, antiseptics and antibiotics and more. I hope the biographies are interesting and informative.

Share on Facebook
Share on Twitter
Share by E-Mail
Author
YOMD39
Time
7 mins
Type
Multiple Choice
Quiz #
8,823
Updated
Dec 03 21
# Qns
15
Difficulty
Difficult
Avg Score
7 / 15
Plays
3602
Awards
Top 35% Quiz
This quiz has 2 formats: you can play it as a or as shown below.
Scroll down to the bottom for the answer key.

Quiz Answer Key and Fun Facts
1. Who was the first woman to enroll in a medical school in the United States and receive her M.D. degree?

Ms. Blackwell enrolled in Geneva College in Upstate New York and graduated at the top of her class. She was refused staff privileges at all hospitals. Thus, she set up her private practice in New York City and specialized in the care of women and children
2. Which physicians are credited with the discovery and isolation of insulin in the pancreas of animals and then used it to treat patients with diabetes?

In 1921 at the University of Toronto these men made the first major discovery for the treatment of diabetes. They extracted insulin from the pancreas glands of cattle and pigs. All current insulin for the treatment of diabetics is a human insulin produced by using DNA recombinant technology.
3. Who discovered Penicillin for which he received the Nobel Prize in Medicine in 1945?

Sir Alexander Fleming noticed a mold that contaminated his bacterial implants on laboratory Petri dishes inhibited the growth of the organisms. This was identified as Penicillin. Limited supplies were made available to the military services in about 1942-44.
4. Who discovered streptomycin, the first antibiotic effective for the treatment of tuberculosis, for which he was named Nobel Laureate in Medicine in 1952?

Waksman undertook a sytematic program to identify substances in the soil that might have antibiotic characteristics. Three important antibiotics were isolated and identified, including actinomycin, streptomycin and neomycin.
5. Which of the following is NOT true regarding the studies and career of Linus Pauling?

He won the Nobel Prize for Chemistry (not medicine) in 1954 and the Nobel Peace Prize in 1962. No other person has won two unshared Nobel Laureate Awards in a lifetime. Although he discovered that sickle cell anemia was due to a genetic defect, he was not an M.D.
6. Who performed the first succesful human heart transplant in the United States?

The patient survived the operation and lived for several weeks but then died. Dr. Shumway went on to become Chief of Cardiovascular Surgery at Stanford University School of Medicine.
7. Which of the following is NOT true regarding the studies and life of Albert Schweitzer?


Answer: Ordained as curate at the Church of St. Paul

Schweitzer was a philosopher, physician, musicologist, theologian and a missionary. He established a hospital in French Equatorial Africa.
8. Which physician discovered how to prevent puerperal fever in child birth by introducing antiseptic procedures in the delivery ward?

In the 1840's puerperal fever (childbed fever) caused a 30 percent mortality in women deliveried in a hospital. At that time hospital doctors did not wear gowns or wash their hands before delivering a baby. He made the doctors wash their hands in chlorinated lime and adopted other antiseptic procedures for the delivery ward. Mortality from childbed fever dropped to less than 1 percent in a few years.
9. Who was the first to be credited with the discovery of the general anesthetic properties of ether?

W. T. G. Morton was a Boston dentist and performed the first public demonstration, at the Massachusetts General Hospital, of a painless tooth extraction while the patient was under ether anestesia.
10. Who introduced antiseptic techniques into the operating room and thereby reduced the mortality from post-operative infections from 50 percent to less than 15 percent in a few years?

Lister believed that infections were caused by airborne dust and thus he sprayed the air with a carbolic acid solution. Subsequently, he also applied carbolic acid to the instruments, the patient's wound and to the dressings. Queen Victoria made him a Baron. It is a sad commentary to the fact that the famous 1st Baron Joseph Lister is currently best known for a mouth wash.
11. Who was the first to strongly advocate the use of chloroform as a general anesthetic during the labor of childbirth?

Initially, his use of chloroform general anesthesia during child birth was strongly opposed by the church and by his medical colleagues. When Queen Victoria accepted chloroform anesthesia for the birth of Prince Leopold in 1853, the procedure gained general acceptance. He was knighted and became Sir James Simpson.
12. For what discovery were James Dewey Watson and Francis Crick awarded the Nobel Laureate in Medicine in 1962?


Answer: Discovery of the structure of DNA

Watson, an American geneticist, and Crick, an English phyicist, worked together at the University of Cambridge. They discovered the two strands of DNA held together in the form of a double helix.
13. Who first discovered the RNA-DNA molecule?

The molecule containing ribonucleic acid (RNA) and desoxyribonucleic acid (DNA)was first discovered in 1868 by Johann F. Miescher. Hershey and Chase later determined that DNA was a genetic substance.
14. Which of the following is NOT true regarding the contributions of Louis Pasteur to science and medicine?

Pasteur probably made more significant advancements in science and medicine that any other single person. He established 'The Germ Theory of Disease'; he developed vaccines for rabies and anthrax; he saved the silk industry from disaster; he proved that yeast was involved in fermentation (wine making); he established the presence of isomers in some organic compounds and he invented pasteurization to protect perishable foods.

He deserved the Nobel Prize but it was not established until 1931, a quarter century after his death.
15. Who was 'The father of Medicine'?

He was born circa 460 B.C.. At least 70 reports and articles are included in Hippocrates'Collection. He wrote the Hippocratic Oath, which is no longer a required pledge of graduating medical students.
Source: Author YOMD39

This quiz was reviewed by FunTrivia editor Snowman before going online.
Any errors found in FunTrivia content are routinely corrected through our feedback system.
Most Recent Scores
Jan 08 2023 : jackslade: 15/15
Dec 23 2022 : briandoc5: 12/15 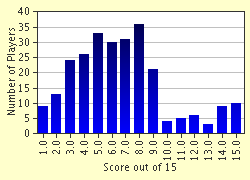 Related Quizzes
1. He Tested It On Himself Average
2. Help Me Fund My Patent Average
3. Down the Ladder: Scientists and Inventors Tough
4. German Grundlichkeit Average
5. Biographies of Chemists Average
6. He Has High Hopes Average
7. Eureka - They Found Them! Average
8. 19th Century Pathologists and Physiologists Tough
9. Playing with Fire Average
10. I Wonder Who Invented That... Tough
11. Ask and Ye Shall Receive Average
12. The Study of Life Average


Other Destinations
Explore Other Quizzes by YOMD39