Here are some famous quotations. Do you know who uttered them?

Quiz Answer Key and Fun Facts
1. "Why don't you write books people can read?" a desperate wife told her husband. Who was the unlucky spouse?

Joyce fell in love with Nora on June 16, 1904, the day that was immortalised as 'Bloomsday' (the day on which the events in "Ulysses" take place.)
2. Which quotation is not by Mark Twain?


Answer: "This is not a novel to be tossed aside lightly. It should be thrown with great force."

Dorothy Parker said that. She was known for her uncompromising attitudes and (very) sharp wit. Mark Twain often used humour to express his hatred of hypocrisy and oppression.
3. What great general said: "In politics stupidity is not a handicap."

4. Which quotation is not by Albert Einstein?


Answer: "Get your facts first, and then you can distort them as much as you please."

Emerson had many friends. They inspired him and he invested a lot of time, effort and sometimes money in them. A famous friend of his was Henry David Thoreau.
6. Even cartoon characters speak grand and true words. Who said: "Sometimes I think the surest sign that intelligent life exists elsewhere in the universe is that none of it has tried to contact us."


Answer: Calvin in "Calvin and Hobbes"

Named after a sixteenth-century theologian who believed in predestination, Calvin was the brain child of Bill Watterson.
7. Which quotation is not by Voltaire?


Answer: "He who possesses art and science has religion; he who does not possess them, needs religion."

Johann Wolfgang Von Goethe (1749-1832) said that. Voltaire had very strong opinions about almost everything and he was never afraid to express them.
8. Complete this quotation by Richard Bach. "Here is the test to find whether your mission on Earth is finished: if you're _____________, it isn't."

Richard Bach wrote "Jonathan Livingston Seagull: A Story", a wonderful book.
9. Who said: "The trouble with her is that she lacks the power of conversation but not the power of speech."

Not very flattering to women, but this should not give you the wrong idea. Shaw was a strong advocate of women's rights.
10. Which quotation is not by Oscar Wilde?


Answer: "That which does not kill us makes us stronger." 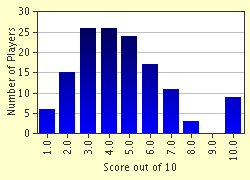 
Other Destinations
Explore Other Quizzes by Polygon