As the power of ancient Egypt waned, desperate priests tried to save the mummies of some of the greatest pharaohs by placing them in a communal tomb called DB320 today. What do you know about the achievements of the kings found in the ancient cache?

Quiz Answer Key and Fun Facts
1. It appears that Pharaoh Seqenenre Tao met a rather violent end, but it is uncertain if it happened in battle or by some other means. It is certain, however, that he was pharaoh at the same time another group had established a kingdom at Avaris, in the Nile Delta. What was the name of this invader to ancient Egypt?

Egypt was a fractured land; not only was the northern area was ruled by the Hyksos, but all of the Egyptian people appear to have been paying some sort of tribute to them. Also known as "the Brave", Seqenenre Tao seems to have tried diplomacy, which ultimately led to military skirmishes with the Hyksos.

When his mummy was unwrapped, evidence of a gruesome death was uncovered. It looks as if part of his left cheek was severed, while another blow injured the skull; a third wound was found above his right eye. Seqenenre Tao was the father of two pharaohs - Kamose and Ahmose I. An ax head that bears the cartouche of Seqenenre Tao is seen in the picture.
2. Ahmose I, the son of Seqenenre Tao, drove the invaders out of Egypt, and established a new dynasty. In fact, it was the same dynasty to which the famous King Tutankhamun belonged. Name the dynasty!

Ahmose I is considered to be the founder of the 18th Dynasty in ancient Egypt. Even though his father, Seqenenre Tao, and brother, Kamose, are considered to be pharaohs of the 17th Dynasty, and there is no break in the line of royal family rule, the historian, Manetho, considered the expulsion of the Hykson by Ahmose I and the reinstatement of Egyptian rule over the entire country a significant enough event to warrant the beginning of a new dynasty.

In the picture, Ahmose I is seen driving the Hyksos out of Egypt.
3. The mummy of Amenhotep I remains one of the few found in the ancient cache that has remained unwrapped to this very day. Why have archaeologists chosen to leave the cartonnage intact?


Answer: The cartonnage and funeral mask are too magnificent to risk damaging.

Cartonnage is a material that was used when constructing funeral masks and wrapping mummies beginning as far back as the First Dynasty in ancient Egypt. In a technique which is similar to papier-mâché, layers of linen or papyrus are held together with resin or glue.

After drying, the Egyptians decorated the cartonnage with portraits and designs. This mummy, which appears to have received very gentle handling by the ancient priests who moved it to DB320, is the only royal mummy in the cache that has not been examined and photographed.
4. Thutmose I is the first confirmed pharaoh to have built a tomb for himself in which prestigious location?


Answer: Valley of the Kings

Known during life for the brutal repression of a Nubian rebellion, Thutmose I is well known in death for his choice of a burial site. His tomb, classified as KV38, apparently did not remain his final resting place for long; his body was reburied with his daughter's burial goods in KV20 after her death.

But not for long! Eventually he was reburied by his grandson in KV38, which had been made even more spectacular; ancient grave robbers, however, plundered KV38 a few years later, and the mummy of Thutmose I was placed in the DB320 cache.

Interestingly, the location of KV20 was already well-known by the time Napoleon brought his troops and entourage of scientists to Egypt; eventually, however, the tunnels became blocked. In 1903-04 the tomb was once again entered by none other than Howard Carter, the archaeologist who discovered King Tutankhamun's tomb in the Valley of the Kings.
5. The reign of Pharaoh Thutmose II is overshadowed by his famous wife, who apparently ruled Egypt in her own right after his death. Who was the wife of Thutmose II?

Thutmose II was the son of Thutmose I who was chosen to marry his sister, Hatshepsut, with whom he fathered a daughter named Neferure. His famous son, Thutmose III, was the son of one of his lesser wives. Of course, many historians believe that Hatshepsut was the power behind the throne because she was named as her father's, Thutmose I, intended heir.

When Thutmose II died, she had herself crowned pharaoh and was co-regent with his son, Thutmose III, for twenty-two years.
6. For which of the following contributions to ancient Egypt is Thutmose III best known?


Answer: He led at least 17 military campaigns and is known as the "Napoleon of Egypt".

During the time of the co-regency with Hatshepsut, Thutmose III served as the leader of her armies. Including the twenty-two years of co-rule, Thutmose III is believed to have ruled Egypt for fifty-four years. It was recorded that during his rule, Thutmose III, who is considered by many to be Egypt's greatest warrior, captured 350 cities, and extended the empire from the Euphrates River in the north to Canaan in the east and Nubia in the south.

In the picture, Thutmose III is shown at Karnak defeating his enemies.
7. Ramses I was the founder of a new dynasty in ancient Egypt. How did he become pharaoh?


Answer: He was chosen to be heir apparent by King Tutankhamun's advisor, Horemheb.

During the reigns of Tutankhamun and Ay, Horemheb served as an important advisor and leader of the army. While there is evidence that Tutankhamun selected Horemheb as his heir-apparent, the general was not in Egypt at the time of Tutankhamun's death; Ay was able to take the throne, even though Horemheb had been the official heir for quite some time. Four years later, however, after the death of Ay, Horemheb was able to take control. Ramses I was not only an advisor to pharaoh, but also a high priest of Amun; he was appointed as heir-apparent to the childless Horemheb.
8. Seti I, the son of Ramses I, was able to recapture which Hittite stronghold, which had been lost to the ancient Egyptians during the time of Akhenaten?

The attempt by Akhenaten to do away with the old religion and begin the worship of Aton caused much upheaval in ancient Egypt. In fact, much of what was done after King Tutankhamun's death had to do with restoring social order and re-establishing control over lands than had been neglected or lost during the Amarna Period. Both Ramses I and Seti I felt pressure from the Hittites, who had been ignored for too long and presented a real threat to ancient Egypt.

Although it was recorded that Seti I defeated the Hittites at Kadesh and even erected a victory stela there, there was no way he could leave a standing army there to permanently occupy the area.

It wasn't very long before there was another boundary issue with the pesky Hittites.
9. Ramses II succeeded his father, Seti I, as pharaoh, and is remembered in history as Ramses the Great, builder of empires and monumental structures. By what name did the ancient Egyptians remember him?

Interestingly, there had been some discussion among modern historians about the fact that perhaps Ramses II did not deserve to be called "the Great". Many of the monuments that Ramses II inscribed his name on, have been found to have been constructed by predecessors! There are those, however, that agree that in spite of this habit, when one takes into consideration the other great achievements in building and military campaigns, not to mention the fact that he ruled Egypt from his late teens to his ninetieth year, Ramses II does deserve to be called "the Great".
10. By what distinction is Pharaoh Ramses III known?


Answer: He was the last New Kingdom pharaoh to exercise any substantial authority over Egypt.

After the reign of Ramses III during the 20th Dynasty, Egypt fell into a period of decline. Faced with foreign invasion by the Sea Peoples and Libyans, Ramses III was constantly at war during his tenure as pharaoh. Waging continual war is expensive, and Egypt began to experience economic problems.

The first labor strike in history was recorded during his reign, when food rations for the skilled artisans and tomb builders ran low. In addition, grain prices rose, possibly due to a volcanic eruption elsewhere.

The New Kingdom, or Empire Age, came to an end with the last ruler of the 20th Dynasty, Ramses IX, whose mummy, by the way, was the eleventh and last pharaoh to be found in the ancient cache.
Source: Author ponycargirl 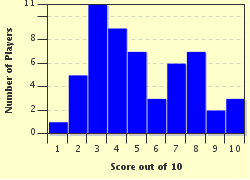