Tales of the Pharaohs Trivia Quiz

With a title meaning, "Great House", the pharaoh in ancient Egypt was not only the political leader, but also the religious leader. Viewed as a god, pharaoh was all-powerful. See if you can identify the pharaohs from the given clues.

Akhenaton, born Amenhotep IV, led a religious revolution during his reign in ancient Egypt, which earned him the nickname, "The Enemy". Believing that the one and only true god was Aton, represented by a solar disk, he attempted to make Egypt a monotheistic nation.

The capital was moved from Thebes to a new city called Tell el-Amarna, where a huge open-air temple was built in honor of the new god. Ancient Egyptians, conservative and happy with the life they had previously known, were not eager to make the religious change; when Akhenaton died, his successor was quickly convinced to lead a restoration of the old gods and ways. Amarna was left abandoned and forgotten.
2. Co-Regent Battle of Megiddo Military Expeditions

At the Battle of Megiddo, he defeated Mitanni forces, and was able to extend Egyptian control to Palestine and Syria. The battle is significant in history; it is the first with a detailed account, and body count.

It was also the first recorded use of a composite bow. During his reign he waged seventeen military expeditions, which not only expanded Egyptian territory, but also enriched the government treasury.
3. The Great Battle of Kadesh Abu Simbel

Ramses II, also known as Ramses the Great, ruled during ancient Egypt's Nineteenth Dynasty for sixty-seven years. Given the nickname originally because of all his achievements, it was decided that it was deserved even after historians noticed that Ramses sometimes embellished the truth and put his name on projects that had been completed by earlier pharaohs! For example, who really won the famous Battle of Kadesh? Both sides took the credit for the victory; it appears that the Hittites really made a surprise attack and drove the Egyptians from the area! The construction of Abu Simbel was an enormous building project in Nubia, that featured four giant statues of Ramses himself!
4. Expedition to Punt Funerary Temple False Beard

It appears that Hatshepsut seized power from her young stepson, and ruled Egypt as the dominant co-regent for over twenty years. Her reign was characterized by trade expansion and monumental building projects. The expedition to Punt, which was in the area of modern-day Somalia, made it possible for the Egyptians to acquire goods from sub-Saharan Africa, including hardwoods and myrrh. Located at Deir el Bahari, her funeral temple, dedicated to the sun god Amun, contained areas for public worship.

Historians continue to debate whether she was truly the first female pharaoh of Egypt. However, it seems that she did operate as a man would have, even wearing the false beard as male pharaohs did.
5. Living Image of Aton Howard Carter Funeral Mask

When Tutankamun became pharaoh sometime around the age of nine, his name was Tutankhaton, which meant "Living Image of Aton". His predecessor, who some believe was his father, threw Egypt into an age of turmoil when he attempted to wipe out all the ancient polytheistic gods in favor of the "one true god", Aton. Very quickly the young king followed his advisors' opinions, reinstating the old gods and moving the capital back to Thebes. Believed to be a relatively insignificant pharaoh, Tut's name because a household word in 1922, after the discovery of his almost-intact tomb by Howard Carter.

His tomb contained well over 5,000 artifacts - but which one was most impressive? Perhaps it was his funeral mask, made of 18.4 karat and 22.5 karat gold, which was meant to preserve his identity for the afterlife.
6. Cheops "Smasher of Foreheads" Great Pyramid

Also known as Cheops, Khufu's nickname, "Smasher of Foreheads" would seem to indicate that he was an especially autocratic ruler. While this may have been true, it appears that many of the pharaohs in ancient Egypt were pictured in the same way; it was necessary for pharaoh to appear to be a great conqueror, as well as an all-powerful, but benovolent ruler of his own people. Very little is known about anything regarding the actual rule of Khufu.

However, he did provide for the building of one of the most iconic pieces of architecture in the world today. Built over a period of 10-20 years, not only is the Great Pyramid the oldest of the Ancient Wonders of the World, but it is the only one that still survives!
7. Narmer Unified Upper and Lower Egypt Memphis

Menes, also known as Narmer, is considered to be the first pharaoh of the First Dynasty in ancient Egypt. He united the ancient kingdoms of Upper and Lower Egypt in approximately 3100 BC. The new capital, a city named Memphis, was built at the point where the two kingdoms joined.

Another symbol of unification created by Narmer was the new Pschent crown, which was made by joining the Hedjet, the white crown of Upper Egypt, with the red crown of Lower Egypt, called the Deshret. This unification was considered by the ancient Egyptians to be the beginning of their history.

The last pharaoh of the last dynasty (Ptolemaic) to rule ancient Egypt, Cleopatra's family was descended from Alexander the Great's general, Ptolemy. Culturally she was really more Macedonian Greek than Egyptian. Cleopatra's relationship with Rome really began when Pompey the Great fled to Egypt looking for asylum during his civil war with Julius Caesar. Of course, Caesar following his old friend and ally to Egypt - only to find that he has been killed by orders of the young pharaoh - and the rest is history! The story is that Cleopatra wanted to meet him, but had difficulty in finding someone to make the introduction. Clever girl! She had herself delivered to him within a roll of carpet.

She was the mother of their son, Caesarion. However, she could not convince Caesar to name the boy as his heir.

Instead, Octavian became Caesar Augustus after the death of his uncle, and Cleopatra allied with Marc Antony.
9. Fourth Dynasty Bent Pyramid of Dashur Raids to Nubia

The founder of the Fourth Dynasty, Snefru ruled Egypt for approximately twenty-four years. During his reign, three well-known building projects were undertaken. The Pyramid at Meidum, for which Snefru is given credit by some, is an important example of the progression of pyramid construction in ancient Egypt from step pyramids to triangular-shaped ones. Snefru is also given credit for building The Bent Pyramid of Dashur and the Red Pyramid, which obviously gave his heir, Khufu, the impetus to build the Great Pyramid.

Historians agree that all of this building required workers, which were apparently acquired during raids to Nubia and Libya.
10. The Magnificent Memorial Scarabs The Colossi of Memnon

Called "The Magnificent" because during his reign Egypt reached the height of prosperity, artistic accomplishment, and international power, Amenhotep III became pharaoh sometime around the age of six. He also has the distinction of being the subject of more discovered statues (250 have been found) than any other pharaoh. During his reign hundreds of memorial scarabs were engraved with lists of his many accomplishments and distributed throughout his empire. Several told the story of the pharaoh's lion hunt, recording that he killed over one hundred lions.

The Colossi of Memnon, believed to bear the image of Amenhotep III, have been viewed by visitors to Egypt for over 3400 years.
Source: Author ponycargirl 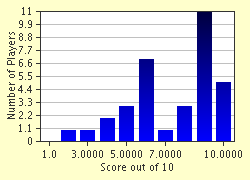