It probably sounded like a good idea at the time, but for some reason, these inventions just didn't catch on. Can you guess what the inventions were from the clues?

Quiz Answer Key and Fun Facts
1. In 1922, Edith Head of Washington invented a device to allow babies living in apartments to get fresh air; Michael Jackson might have been a fan of it. Which invention was it?

Long before Michael Jackson dangled his child over a balcony, Edith Head (not the fashion designer) invented a metal baby cage that could be attached to a window, allowing the child to be suspended outside the building. As "The World through My Eyes" weblog noted, "little junior will get plenty of fresh air and a six story drop to the ground".
2. In 1991, David Kendrick of New York patented a device to help us realize that life was passing us by. What morbid invention was it?

Yes, if you were desperate to know how much time you had left on the planet, this device was for you! The life expectancy was calculated with an actuarial table and then loaded into the timepiece (which you could wear as a watch). The time could be adjusted if you changed your lifestyle for better or worse.
3. In 1980, Lucy Barmby of California patented a device to help people who were trying to lose a few pounds, or maybe lots of pounds. What device did she invent?

So that picture of a skinny model on the refrigerator wasn't working? Well, this device consisted of a cup over the mouth and chin with straps that attached on top and behind the head. The cup was made of a breathable material, so breathing and speech weren't affected. Maybe it was the ease with which the device could be removed that prevented the invention from catching on.
4. In 2001, three boys from California invented a device that allowed people to take these creatures for walks. For which scaly pets was the device intended?

Well, this was a logical invention as a regular leash wouldn't hold the snake. The collar was designed to move with the snake but not allow the snake to escape from it. The boys maintained that it was a valuable invention because snakes benefit from getting natural sunlight. Of course, you could just leave a snake in its natural environment, and it would get sufficient sunlight there, but who am I to judge?
5. In 2001, Clifton Otto of Washington invented a device to help humans interact with dolphins. Which device allowed a person to truly experience being a dolphin?

Well, swim fins were invented to help humans move better in the water so why not a dorsal fin? The fin was attached to the body by a waist belt and was intended to help a person better mimic the movements of dolphins when swimming with them in the wild. Perhaps the dolphins were insulted; for whatever reason, the device just didn't take off.
6. In 1982, Deanna Porath of Alabama invented a device that would allow junior to help out with the family chores. Which device was it?

It had safety features to prevent injury or amputation. The lawn mower was manually-operated - no fuel other than muscle power was required. It wasn't specifically designed for a child; it could be used by anyone wanted to ride around the yard... on a tricycle.
7. In 1902, Andrew Jackson, Jr. of Tennessee invented a device for domesticated animals to protect them against attacks by their peers. What did Mr. Jackson invent?

Mr. Jackson (not the former U.S. president) had apparently noticed eye injuries incurred when chickens and other birds pecked at each other and decided to devise a means of protection. His invention looked like round eye-glasses that were attached with a band that went behind and over the bird's head. Of course, this gave the birds something else to peck at.
8. In 1908, a "better" version of this common device was built. Which clichéd invention was it?

What made this mouse trap better? Well, the mouse (or other animal) would stick its head into a box of food to retrieve bait, which would trigger the release of a collar with a bell that would snap around the animal's neck. The critter would then take off for its home, and the sound of the bell would scare off the other inhabitants, thus ridding the area of the offending animals. Of course, there was no guarantee that the animals would leave; the end result could be that you would now just hear them moving around. Jingle, jingle, jingle.
9. In 1988, Rupert Knierim patented an alarm to be worn by adolescents to remind them to do this unpopular thing. What was it?

Methinks the inventor must have been a disgruntled dentist or a frustrated parent. The bizarre device consisted of an alarm and a magnet that were attached to the braces. The magnet activated a switch when the headgear was worn. If the switch wasn't activated, the alarm would make an irritating beeping sound until the headgear was put on. So now teens had the choice of being embarrassed either because they were wearing the headgear or because their mouth was beeping.
10. After World War II, a prototype attachment was made for the M3 submachine gun that was intended to protect users. What device was it?

The attachment was based on a similar device made for the German army. The intent was to allow soldiers to shoot around corners without exposing them to return fire. Besides the obvious issues with the "shoot first, ask questions later" concept, the bullets did not respond well to the curved barrel; they could become damaged, which affected their trajectory or even worse, they could destruct within the barrel.
Source: Author PDAZ 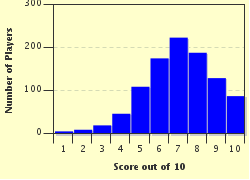 Related Quizzes
This quiz is part of series Commission #10:

It only made sense, for the Author Lounge's tenth Commission, to ask authors to write ten-question quizzes all revolving around the number ten. Here are the more-than-ten quizzes we had written for this milestone Commission in June 2010.