Here is a quiz about ten people all of whom have a connection to either the name "Black" or the color "Black." I hope you enjoy.

Quiz Answer Key and Fun Facts
1. Who is the musician, known as "The Man in Black", who sang the lyric "I shot a man in Reno, just to watch him die"?

Some of Johnny Cash's well known songs are "I Walk the Line", "Folsom Prison Blues" (the quote in the question), and "Ring of Fire."
2. You can stay under the big top while you answer this. Which American showman has his biography told in a musical that includes the song "Black and White"?

The musical is "Barnum" (1980), starring Jim Dale. In the song "Black and White," Barnum is trying to move past the "showier" parts of his life, to please his wife Charity.
3. Shirley Temple Black may be best known as a movie star, but she also held several government posts. To which country did she NOT serve as US Ambassador?

In addition to her two ambassadorships, she also served as the US representative to the UN General Assembly and Chief of Protocol for the United States. Shirley Temple was one of the most popular movie stars of the 1930s.
4. In the animated film, "Superman/Batman: Public Enemies," ST:TNG alum Levar Burton provided a single line of dialogue for this DC Comics character who can generate and amplify electricity. Who is he?

The character of Black Vulcan, who had similar powers, appeared in the Super Friends TV show. LeVar Burton is a well known actor who has also appeared in Roots and Reading Rainbow.
5. In which classic science fiction television show did William Marshall, who starred as "Blackula" in the 1972 film of the same name, also gave a memorable performance as Dr. Richard Daystrom?

He certainly gave a memorable performance in the episode "The Ultimate Computer", as a scientist who designed a computer to operate a star ship without a human crew.
6. Which automobile executive supposedly said "Any customer can have a car painted any color that he wants so long as it is black"?

The car he was talking about was the Model T Ford, one of the most successful car models ever made. Incidentally, in the early years of production, the Model T was available in several colors.
7. "Blackbird singing in the dead of night Take these broken wings and learn to fly All your life You were only waiting for this moment to arise." Which member of the Beatles wrote and performed the song "Blackbird"?

Blackbird was released in 1968 as part of the "White Album." It appeared on the second of four sides. "Rolling Stone" magazine named "Blackbird" as the 38th best Beatles song.
8. What was the real name of Blackbeard the Pirate?

Active in the early 1700s, Blackbeard mostly operated in the West Indies and the coast of the English colonies of North America.
9. Who wrote the novel "Black Beauty," a protest against cruelty to horses?

Beatrix Potter is known for "The Tale of Peter Rabbit." Kenneth Grahame is known for "The Wind in the Willows." Charles Dodgson, as Lewis Carroll, is known for "Alice in Wonderland."
10. In 2006, Amy Winehouse released the album "Back to Black." Don't be caught sleeping: Which song was not found on that album?


Answer: In My Bed 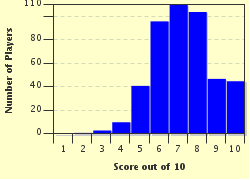 Related Quizzes
1. "There Is No Remedy For Love... Easier
2. Just Leave it to the Kids Average
3. Kim, Park and Lee Very Easy
4. A Challenge for Children Very Easy
5. Their End Is Nigh Average
6. Please Don't Eat Me Average
7. A Short Story Very Easy
8. To the Joy and Through the Tears Average
9. People with Biblical Names Average
10. The Living Years Average
11. Just a Coincidence Very Easy
12. Famous Fighters Average