Think you know the basics about Ben Franklin? Take this quiz and see if you do!

Quiz Answer Key and Fun Facts
1. In which city was Ben Franklin born?

Ben Franklin is permanently linked in our minds with Philadelphia -- but yes, he was born in Boston. Sometimes he is called 'Boston's Most Famous Philadelphian.'
2. How many siblings did Ben Franklin have?

Sources differ on this matter, ranging from 14 to 17. Colonial and revolutionary era families were frequently large, but even so, 15-18 children? As soon as they were able, male children were sent out to help support the family, each eventually earning both a living and his independence. Daughters were expected to learn household duties and await marriage.
3. What was the extent of Ben Franklin's formal education?

Education in those days, particularly what we call higher education, was for the sons (not daughters) of the wealthy. Ben's working class background afforded him no such privilege.
4. Ben Franklin's many talents and abilities led to success in diverse fields. Which was NOT one of them?

Whilst portrait painting was not one of his great skills, he had plenty of others: writing, and diplomacy, and invention, and healthful living, and ... and ...
5. Though recognized for his accomplishments in many fields, Ben Franklin himself identified most with the trade at which he was originally apprenticed. What was that trade?

Ben's greatest commercial successes were tied to his skills in printing and publishing. The first line of his epitaph, which he wrote himself, reads "B. Franklin, Printer ..."
6. At which sport did Ben Franklin excel?

It may not be the first activity that comes to mind when you think of Ben Franklin, but he was, in fact, an excellent swimmer. He even had a hot tub!
7. Where did Ben Franklin spend the majority of his adult life?

As much as he loved his adopted city of Philadelphia and his native land, his governmental responsibilities and assorted interests led him to stay in Europe for years at a time. His family seldom saw him, but toward the close of his life, he did return to the United States, wishing to die in his own country.
8. We are familiar with many of Ben Franklin's inventions, including the Franklin stove. Why didn't he obtain a patent on his stove?


Answer: He felt that no one should profit personally from a practical invention that could benefit everyone.

For a shrewd, successful businessman, Franklin could be remarkably unselfish. His desire to make others' lives easier, without thought of financial gain, is certainly admirable.
9. Philadelphia in the eighteenth century, though large by colonial standards, was relatively primitive. Public services that we take for granted had not yet been instituted. Ben Franklin started all of the following except one. Which one was it?

He also started the post office, founded what would become the University of Pennsylvania, and began the practice of laying sewer lines and paving streets.
10. Which of these familiar quotations did Ben Franklin NOT say?


Answer: Give me liberty or give me death.

Though all of the quotations attributed to Ben Franklin did not originate with him, he deserves credit for copying them and publishing them in
his 'Pennsylvania Gazette' and 'Poor Richard's Almanac.' With a little effort you can unearth dozens of these witty sayings.

"Give me liberty or give me death" is attributed to another patriot, Patrick Henry.
Source: Author gloryB2 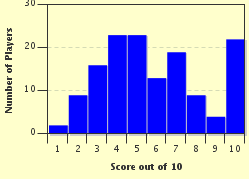 
Other Destinations
Explore Other Quizzes by gloryB2