Whatever Happened to Alfred? Trivia Quiz

Spend time thinking about some of the world's most famous Alfreds? Wonder whatever happened to them? If you do, this quiz is tailor made for you. If you don't, never fear! It will still give you a few moments of pleasant distraction.

Share on Facebook
Share on Twitter
Share by E-Mail
Author
glendathecat
Time
5 mins
Type
Multiple Choice
Quiz #
326,715
Updated
Dec 03 21
# Qns
10
Difficulty
Tough
Avg Score
6 / 10
Plays
396
Awards
Top 35% Quiz
This quiz has 2 formats: you can play it as a or as shown below.
Scroll down to the bottom for the answer key.

Quiz Answer Key and Fun Facts
1. Whatever happened to Alfred Pennyworth? Batman's batman "died" in 1964 but what happened to him afterwards?


Answer: He turned into a supervillain

Alfred's "death" came in the "Detective Comic" 328 published in June 1964 where he seemingly sacrificed himself to save Batman and Robin. This left them on their own for the following two years and having to face a new supervillain known as the Outsider. Finally, in Edition 356 (October 1966), it was revealed that the Outsider was really Alfred who had been revived and scientifically modified. Alfred, on being restored to normal, had no memory of the intervening period.
2. Whatever happened to Sir Alf Ramsey? England will always remember Ramsey fondly as the manager that coached the national soccer team to victory in the 1966 FIFA World Cup. What was unusual about his final coaching role, which saw him replace Roy Race as manager of Melchester Rovers?


Answer: It was in a comic strip

After England's triumph, Ramsey continued to manage the national team until 1974. Subsequently, he had brief spells as caretaker manager at English club Birmingham City, and as a consultant for Turkish side Panathinaikos.

Melchester Rovers was a fictional club created for the "Roy of the Rovers" comic strip and its central character of Roy Race. This first appeared in "Tiger" magazine in 1954 and developed through various publications until 2001. It even constituted a comic in its own right from 1976 to 1995. Ramsey took over as caretaker manager during the 1981/2 season after Race was shot in remarkably similar circumstances to those of the "Who shot JR?" storyline from "Dallas".
3. Whatever happened to Alfred Haase? Nazi officer Haase died in 2009 and his name, by now, might have been largely forgotten but for his having fathered a famous musical personality. Which of these is his offspring?

Anni-Frid Lyngstad - the brunette in Abba - was the daughter of Haase and a Norwegian mother. Haase returned to Germany at the end of the war whilst Anni-Frid's mother left Norway for Sweden afraid that their family would be seen as Nazi collaborators. Lyngstad's formal title is now Her Serene Highness Princess Anni-Frid Synni Reuss, following her 1992 marriage to the German Prince Heinrich Ruzzo Reuss of Plauen.
4. Whatever happened to Sir Alfred Hitchcock? When he died at Bel Air, Los Angeles in 1980, his ashes were scattered over which of these oceans?

Other famous people to have had their ashes scattered at sea include Mahatma Gandhi, Jerry Garcia, H. G. Wells, Gene Kelly and Ingrid Bergman.
5. Whatever happened to Alfred Gregory? Gregory's claim to fame is as the official photographer for a historic first. Which of the following did he capture for posterity?

Compared to Edmund Hillary, Sherpa Tenzing and John Hunt, Alfred "Greg" Gregory is a largely forgotten member of the team that conquered Everest in 1953. He was recruited by Eric Shipton, the original team leader, and remained after Shipton was forced to step down in favour of Hunt. Responsible for stills photography, Gregory produced some iconic images that circulated the globe.

He died in February 2010, at the age of 96.
6. Whatever happened to Alfred Lord Tennyson? Or in this case, whatever happened to him whilst a student in Cambridge? Who or what were the Cambridge Apostles, that were connected to Tennyson's undergraduate days but endured long after his death?


Answer: A secret society of which he was a member

The society's membership has also included such luminaries as John Maynard Keynes, James Clerk Maxwell, Rupert Brooke, E. M. Forster and Soviet spies Guy Burgess and Anthony Blunt.
7. Whatever happened to Alfred Bester? American sci-fi author Bester died in 1987 but was immortalised with the creation of a character bearing his name, in which of these television series?

Bester's novel, "The Demolished Man", was the first ever recipient of a Hugo award, for sci-fi/fantasy writing, in 1953. He was nominated on five further occasions. The "Babylon 5" character of Alfred Bester was created in his honor and was played by Walter Koenig, Pavel Chekov in "Star Trek". Babylon 5 has itself won two Hugos (for dramatic presentation) although neither winning episode featured Bester.
8. Whatever happened to Alfred Nobel? What was unusual about Nobel's obituary when it was published in 1888?

The obituary, printed in error after the death of Nobel's brother, was highly critical of Nobel's role in the development of explosives and is generally accepted as a major factor in persuading him to leave behind a positive legacy. This was done via his will which established the now familiar prizes for literature, peace, physics, chemistry and medicine.

Although not in his will, the Nobel Prize for Economics came later in 1969.
9. Whatever happened to Alfred "Al" Oerter? Discus thrower Oerter was a four-time Olympic gold medalist between 1956 and 1968 after which he retired from active competition. In 1980, he decided to return, at the age of 43, and try out for the US Olympic team. What happened to him?


Answer: He achieved a lifetime best

Oerter's distance of 227 feet 11 inches (69.46 meters) was good enough for fourth place in the qualifying event and a position of first reserve for the American team. Unfortunately, the Soviet Union's invasion of Afghanistan led to an American boycott and Oerter lost any chance of a glorious comeback.
10. Whatever happened to Alfred Butts? He left this world, in 1993, having given us the game of Alph (aka Lexiko aka Criss Cross Words aka It) but most of us know it by a very different name. For which of the following do we have to thank Mr. Butts?

American born architect and crossword fan Butts developed what was to become Scrabble during the 1930s. The now familiar name was supplied by an agency and Scrabble was launched onto the American market in 1949. Its popularity was ensured after New York department store Macy's put their weight behind it.
Source: Author glendathecat 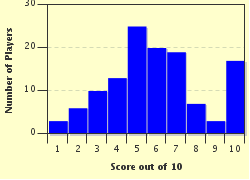