The name "Barbara" means "foreigner or stranger". Hopefully, you are no stranger to these famous Barbaras of past and present. Enjoy!

Quiz Answer Key and Fun Facts
1. Nominated for an Academy Award for the movie "I Remember Mama", this Barbara was best remembered for playing the matriarch of television's Ewing family.

Ms. Bel Geddes was also nominated for a Tony Award for "Cat on a Hot Tin Roof". Much sought-after in her youth, her career was damaged during the era of McCarthyism and she never regained her previous leading lady status.
2. This Senator authored a bill to repeal President Clinton's "Don't Ask, Don't Tell" armed forces policy. When she was elected in 1992, it marked the first time in U.S. history that a state was represented by two female senators at the same time.

Barbara Bush also said, "I may be the only mother in America who knows exactly what their child is up to all the time."
4. Barbara Bach had a fairly satisfying acting career, but her biggest claim to fame was her marriage to ex-Beatle Ringo Starr. They met on the set of what movie?

Ringo and Barbara tied the knot in 1981. They have no children together, although both have children from previous marriages.
5. Barbara Feldon was famous for her role on the television show "Get Smart", where she played "Agent 99". She also appeared on the quiz show "The $64,000 Question" where she won $64,000 in the following category:

Ms. Feldon graduated from Carnegie-Mellon University with a degree in Fine Arts.
6. Although NBC's "No Navel Edict" kept Barbara Eden from showing her belly button during most of the television series "I Dream of Jeannie", producers were allowed (and did) show her navel in the final episode.

Not only did they never show her belly button in "I Dream of Jeannie", she was pregnant during the first year of the series and they managed to never show her belly at all!
7. Barbara Stanwyck enjoyed a long and fruitful acting career, including TV shows ("The Big Valley"), TV Mini-series ("The Thorn Birds") and movies ("Stella Dallas"). Her real name was:

Barbara Stanwyck was nominated for an Academy Award four times ("Sorry, Wrong Number", "Double Indemnity", "Ball of Fire" and "Stella Dallas"), but never won. She was given an honorary Oscar in 1982 for "superlative creativity and unique contribution to the art of screen acting."
8. This famous author started out as a serious journalist and news reporter in London, and moved on to writing children's books and decorating guides. She now sticks to writing romance novels, 18 of which have appeared on the New York Times Bestseller list.

At the age of 16, Barbara Taylor was already a reporter for the Yorkshire Evening Post. For twelve years, she wrote a syndicated newspaper column on decorating that garnered many awards.
9. News professional Barbara Walters was recently inducted into the Academy of Television Arts and Sciences' Hall of Fame, celebrating a life of news reporting from "The Today Show" to the "ABC Evening News". During the 1970s, she was parodied on the television show "Saturday Night Live" by which actress?

Barbara Walters once said of herself: "I was the kind nobody thought could make it. I had a funny Boston accent. I couldn't pronounce my R's. I wasn't a beauty."
10. Barbara Mandrell had several top country hits, including "Sleeping Single in a Double Bed" and "One of a Kind, Pair of Fools". In 1980, she hosted a television show called "Barbara Mandrell and the Mandrell Sisters". The two Mandrell sisters who co-hosted the program were:

Although Barbara Mandrell continues to pursue a career in professional acting, her sisters no longer perform with her. Louise Mandrell is an entertainer at the Louise Mandrell Theater in Pigeon Forge, TN, near the Dollywood Theme Park. Ilene Mandrell is the owner of the Catalyst Racing Team and also drives her own race cars.
Source: Author barbarastl 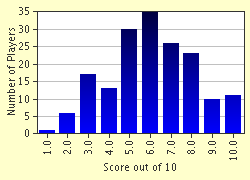 Related Quizzes
1. Anthony's Brainwaves Easier
2. Famous People Named Bob (General Edition) Very Easy
3. Was Alexander Great? Very Easy
4. It's Al-ementary, My Dear Watson! Easier
5. A Bundle of "Bob" Very Easy
6. The Amanda Show Easier
7. You Can Call Me Al Easier
8. Who am I? Benjamin, Ben or Benny Very Easy
9. Are they named Arthur or Art Very Easy
10. Ten August(us) Personages Average
11. Are they an Albert, a Bert or a Burt? Average
12. All About Anna Average


Other Destinations
Explore Other Quizzes by barbarastl