A Quick Look at the Color Black in the Bible Quiz

This quiz takes a look at the color black in the Old and New Testaments. I hope you have as much fun playing this quiz as I had creating it. (The NKJV and NIV were used for this quiz.)

Quiz Answer Key and Fun Facts
1. The first mention of black in the NKJV Bible is Leviticus 13:31, a verse stating in part if there is no black hair in a scaly sore, the priest shall isolate the one who has the scale for seven days. Who is traditionally credited with writing Leviticus?

In addition to Leviticus, tradition holds Moses wrote Genesis, Exodus, Numbers and Deuteronomy. A number of modern day theologians, however, dispute this belief.

The verse in Leviticus 13:31, is part of a lengthy discourse on leprosy. If a person had a white hair in the midst of a scab, a pimple or a spot on the skin, the person was to be isolated from the rest of the people for seven days.

Incidentally, using the NIV Bible, the first mention of black is found in Exodus 10:15, and not Leviticus 13:31 as in the NKJV.
2. 1 Kings 18:45 tells of a king of Israel seeing the sky becoming black with clouds and wind and heavy rain. Who was the king?

Ahab and his wife Jezebel were vehement opponents of Elijah and other prophets of God. According to Scripture, Ahab and Jezebel worshipped false gods and Elijah strongly condemned the couple.

When Ahab saw the sky becoming black with clouds and wind and heavy rain, it was a sign a drought which had extended for more than three years in Israel was finally coming to an end. It would be also a sign his reign would soon be coming to an end.

In 1 Kings 17, Elijah boldly proclaimed to the king of Israel there would be no dew or rain for an extended period of time. And sure enough, Israel went more than three years without any rain.

Just prior to the sky turning black, Elijah had a confrontation with 450 prophets of Baal to see who could successfully call upon a higher power to ignite a sacrificial offering on Mount Carmel, as per 1 Kings 18.

The 450 prophets called on Baal and Elijah called on the LORD with Elijah being the clear winner.

According to 1 Kings 16:33, Ahab "did more to provoke the LORD God of Israel to anger than all the kings of Israel who were before him."

According to Scripture, the verdict was virtually unanimous: Jehovah was the true God. In fact, the people were so impressed with Elijah's victory on Mount Carmel, they agreed with a request of Elijah to round up the 450 defeated prophets of Baal and execute them.
3. What king had a royal court in his garden boasting, among other things, black marble?

Ahasuerus, known as Xerxes in the NIV Bible, is the correct answer. Esther 1:5-8 tells of Ahasuerus hosting a gala feast for all the people, "from great to small." Scripture goes into detail telling of the eye-catching display in the court of the garden of the king's palace. The display, included, among a list of other things, white and black marble. The feast was held in the king's palace in Shushan.
4. Proverbs 7:9 tells of a man taking the path to the house of a harlot "in the black and dark night." Who is credited with writing most of the book of Proverbs?

Nevertheless, the correct answer to the question who wrote most of the book of Proverbs is Solomon.
5. "My skin grows black and falls from me; my bones burn with me," is a quote from an Old Testament book. Who made the statement?

The quote is by Job, as per Job 30:30. He made the statement after he was beset with a series of catastrophes, everything from the deaths of his ten children to the loss of his immense wealth, compounded with the fact he ended up in dismal health. After Job suffered his mind-boggling setbacks, he was visited by some of his friends who attempted to comfort him. However, they made things worse by refusing to listen to Job and pointing an accusing finger at him.

To put Job 30:30 in context, here's how verses 29-31 read in the NKJV:
"I am a brother of jackals,
And a companion of ostriches.
My skin grows black and falls from me;
My bones burn with fever.
My harp is turned to mourning,
And my flute to the voice of those who weep."

Scripture states Job's fortunes improved dramatically after his setbacks and he was blessed immensely in his old age.
6. The following verse is from an Old Testament book: "His head is like the finest gold; his locks are wavy and black as a raven." What is the name of the book?

In other words, the quote about "his locks are wavy, and black as a raven" is in direct reference to Solomon. The Song of Solomon is a relatively small book, consisting of only eight chapters.
7. What prophet of God made reference to a farmer sowing black cummin? (The NIV does not use the adjective black when referring to cummin.)

The statement about black cummin was made by Isaiah in Chapter 28, Verses 25 to 27. The verses are part of a passage in which Isaiah implores the people of Israel to listen to God's teaching.

For the record, cummin, also spelled cumin, is a plant of the parsley family and its seeds are used as a spice. The plant grows from the Mediterranean to central Asia, according to Wikipedia.
8. The following statement is from an Old Testament book: "For this shall the earth mourn, and the heavens above be black, because I have spoken." What is the name of the book?

Jeremiah is the correct answer with the verse coming from Chapter 4, Verse 28. The verse is part of a divine message given to Jeremiah. Notes in the NKJV Study Bible state black skies associate darkness with God's judgment.

According to Jeremiah 1:1, Jeremiah was the son of Hilkiah and came from Anathoth in the land of Benjamin. He prophesied in the days of Judean kings Josiah, Jehoiakim and Zedekiah.
9. Who had a vision of four chariots, with the second chariot being pulled by black horses?

Zechariah had a vision involving four chariots with details found in Zechariah 6:2-3. According to Scripture, the the first chariot was pulled by red horses, the second chariot by black horses, the third chariot by white horses and the fourth chariot by dappled horses.

Zechariah prophesied during the period following Babylonian captivity and wrote the book in the Old Testament that bears his name.

Many Christians believe the book of Zechariah contains a number of prophecies pertaining to the Lord Jesus Christ.
10. In what book of the Bible do you read, "the sun became black as sackcloth of hair, and the moon became like blood."

Revelation is the correct answer with the words found in Chapter 6, Verse 12

Revelation is the last book of the Christian Bible and it was written by John while in exile on the island of Patmos.
Source: Author Cowrofl 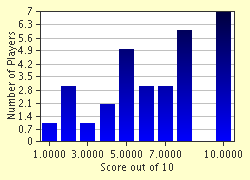