I've always loved the color red with all its vivid emotional overtones. I thought it would be interesting to explore the use of red in the Bible. All references are from the King James Version.

Quiz Answer Key and Fun Facts
1. At the time of his birth, this baby was red and extremely hairy.

Genesis 25:25 gives us this information about Esau's appearance at his birth. Esau and his twin brother, Jacob, were born to Isaac when he was sixty years old. Jacob later covered himself in goat skins to trick his blind, aged father into thinking that he was Esau, the hairy firstborn. This was how Jacob received the birthright.
2. According to Exodus 14:26, what was Moses commanded to stretch over the Red Sea once the sea was already parted?

Bible scholars, historians, and archeologists have long argued over the validity and geographic location of this amazing story. Some of the most interesting work I have read on the subject is Lennart Moller's "The Exodus Case". The author suggests an underwater land bridge at the Nuweiba peninsula in the Red Sea's Gulf of Aqaba as a likely setting for the crossing. Chariot remains and human bones dating to Egypt's 18th Dynasty (1550--1292 B.C) have been found in this area.
3. The rider of the red horse mentioned in Revelation 6:4 is given a weapon. What is it?

The Tabernacle was a portable sanctuary that contained the Ark of the Covenant and the Holy of Holies. The word "tabernacle" comes from the Latin word for tent; in Hebrew, the Tabernacle was know as the "Mishkan".
5. In Isaiah 1:18 (KJV), the Lord says that "though your sins be as _____, they shall be white as snow."

The rest of the verse goes on to say "though they be red like crimson, they shall be as wool."
6. Which young man, who later became king of Israel, was said to be ruddy and good-looking?

I Samuel 16:12 tells us that David was "ruddy and withal of a beautiful countenance, and goodly to look to." And then, of course, he also turned out to be a great musician, composer, warrior, and king. Truly a man among men!
7. Proverbs 23:31 (KJV) cautions, "Look not thou upon the _____ when it is red."

The entire verse reads "Look not thou upon the wine when it is red, when it giveth his colour in the cup, when it moveth itself aright." British physicist Sir Charles Vernon Boys suggested that the reference to the wine moving itself aright is a description of the Marangoni effect, which deals with the effect of surface tension on liquid flow. See Wikipedia's article on "Tears of Wine" for more information.
8. In Matthew 16, Jesus said that a red evening sky indicates what?

There's an old ditty that agrees with this passage:

"Red sky in the morning,
Sailor take warning.
Red sky at night,
Sailor's delight."
9. What did Rahab, the harlot who sheltered Joshua's spies, bind in her window to indicate which house was hers when the Israelites came to destroy Jericho?

Rahab became the great-grandmother of David, that ruddy, good-looking king of Israel. Her actions also earned her a place in the Hebrews 11 Hall of Faith.
10. In the King James Version, the virtuous woman of Proverbs 31 is said to be worth more than what precious substance?

Because of their rarity, rubies are considered to be the most valuable gemstone. High praise indeed for the virtuous woman!
Source: Author julieanne123 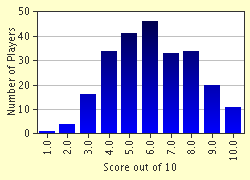 
Other Destinations
Explore Other Quizzes by julieanne123