A Quick Look at the Color Blue in the Bible Quiz

This quiz takes a look at the color blue in Scripture. It's surprising how often the color appears in the Old Testament and New Testament. Hopefully, this quiz won't leave you blue. (The NKJV and NIV were used for this quiz.)

Quiz Answer Key and Fun Facts
1. According to Exodus 28:1-31, whose sons were to wear priestly garments, including an all blue robe?

Aaron, the brother of Moses, is the correct answer. Aaron and his four sons -- Nadab, Abihu, Eleazar, and Ithamar -- were commanded by God to serve as priests. As part of their priestly garments they were to wear a breastplate, an ephod, a robe, a skillfully woven tunic, a turban, and a sash, as per Exodus 28:4. Verse 5 goes on to tell of the garments to be made from fine linen with gold, blue, purple, and scarlet thread. Meanwhile, Exodus 28:31 states the robe of the ephod was all of blue.

According to notes in the NKJV Study Bible, the best way to describe an ephod is as cape or vest made with "fine linen and brilliant colors."
2. According to Exodus 38:23, who was "an engraver and designer, a weaver of blue, purple, and scarlet thread, and of fine linen?"

Aholiab is described in Scripture as "an engraver and designer, a weaver of blue, purple, and scarlet thread, and of fine linen." According to Exodus 38:23, he was the son of Ahisamach, of the tribe of Dan, and was a key person in the creation of materials for the tabernacle of the Testimony.

God provided specifications to Moses for the tabernacle of the Testimony and Moses relayed them to Bezalel, as per Exodus 38:22. Scripture states Bezalel was the son of Uri and the grandson of Hur, and was of the tribe of Judah.
3. Numbers 15:38 tells of God instructing a man to tell the Israelites to "make tassels on the corners of their garments... and to put a blue thread in the tassels." Who was the man who received these instructions?

Moses received the instructions from God. According to Scripture, the Israelites were to look at the tassels and "remember all the commandments of the LORD." Details about the instructions Moses received can be found in Numbers 15:37-40. Moses, of course, led the Israelites out of Egypt and on a forty-year journey to Canaan, known as the Promised Land.
4. What king made the request, "send me at once a man skillful to work in gold and silver, in bronze and iron, in purple and crimson and blue?"

The request was made by Solomon, king of Israel, as he prepared to build a temple "for the name of the LORD" and a royal house for himself. According to 2 Chronicles 2:3, Solomon made the request of the king of Tyre. According to 2 Chronicles 2:7, Solomon stated the man sent by the king would be responsible for engraving, along with skillful Isrealites.

2 Chronicles 2:2 states that construction of the temple was a massive project, with Solomon selecting "seventy thousand men to bear burdens, eighty thousand to quarry stone in the mountains, and three thousand six hundred to oversee them."
5. 2 Chronicles 2:13-14 tells of the king of Tyre sending to Israel a man who was skilled to work in gold and silver, bronze and iron, stone and wood, purple and blue. What was the man's name?

Huram, spelled as Hiram in 1 Kings 7:13, is the correct answer. According to 1 Kings 7:13, Huram was brought in from Tyre by Solomon to assist in the construction of a temple for "the name of the LORD". Details can be found in
1 Kings 7:13-14.

2 Chronicles 2:13-14 states Huram was "skilled to work in gold and silver, bronze and iron, stone and wood, purple and blue, fine linen and crimson, and to make any engraving and to accomplish any plan which may be given to him."

However, in the NIV, the king is referred to as only Hiram and his master craftsman is called Huram-Abi and Huram. Notes in the NIV Study Bible point out that Hiram is a Hebrew variant of Huram.
6. According to the NKJV, what king had a palace with blue and white linen curtains on silver rods and marble pillars?

Ahasuerus, known as Xerxes in the NIV, is the correct answer. According to Esther 1:1, Ahausuerus ruled over a Persian empire that stretched from India to Ethiopia, and consisted of one hundred and twenty-seven provinces. The capital was in Shushan, also known as Susa in the NIV. According to Esther 1:6-7, the king hosted an elaborate celebration in the palace garden in which, among a long list of other things featured, were blue and white curtains.
7. According to Esther 8:15, who went out from the presence of a king in "royal apparel of blue and white, with a great crown of gold and a garment of fine linen and purple"?

Mordecai, the cousin of Queen Esther, is the correct answer. According to the Book of Esther, Mordecai and Esther combined forces to prevent Haman from carrying out a diabolical plan to kill all the Jews in the massive area ruled by King Ahasuerus. (In the NIV, Ahasuerus is known as Xerxes.)

Scripture states that Haman was executed by the king and the Jews celebrated the fact that their lives were no longer in jeopardy. Esther 8:15 tells of Mordecai victoriously exiting from the palace of Ahasuerus, dressed in royal apparel which included the color blue.
8. What prophet of God proclaimed silver from Tarshish and gold from Uphaz was fashioned into items by craftsmen dressed in blue and purple?

Jeremiah, made the proclamation, as per Jeremiah 10:9. There is debate about the exact location of Tarshish. According to Biblehub.org, most scholars believe it is in reference to Tartessus, a city in the south of Spain. However, other scholars believe the placename Tarshish is used as a general expression for all the distant shores of Europe.

On top of this, there is uncertainty about the exact location of Uphaz. While Biblehub.com reports it is probably the name for Ophir, others regard it as the name of an Indian colony in Yemen, southern Arabia. Meanwhile, others regard it as a place in the south-eastern limit of the Punjab, according to Easton's Bible Dictionary.
9. What prophet of God made the lamentation about Tyre, stating, "blue and purple from the coasts of Elishah was what covered you"?

Ezekiel is the correct answer, with the proclamation coming from Ezekiel 27:7. Tyre is a placename that appears multiple times in the Old and New Testaments. According to Biblearchaeology.org, Tyre is in Lebanon and is only twelve miles north of the Israel-Lebanon border. Today, Tyre is "just a shadow" of its former self, the website states.
10. Who had a vision of men on horses with breastplates fiery red, hyacinth blue, and sulfur yellow?

John, writer of Revelation, the final book of the New Testament, is the correct answer. Revelation 9:17 in the NKJV states: "And thus I saw the horses in the vision: those who sat on them had breastplates of fiery red, hyacinth blue, and sulfur yellow; and the heads of the horses were like the heads of lions; and out of their mouths came fire, smoke, and brimstone."

John wrote the book while in exile on Patmos, an island in the Aegean Sea.
Source: Author Cowrofl 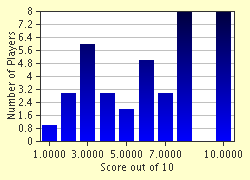