A Quick Look at the Color Red in the Bible Quiz

This quiz takes a look at the color red in Scripture. It's surprising how often the color appears in the Old Testament and New Testament -- even if you don't have a red-letter edition Bible. (The KJV, NKJV and NIV were used for this quiz.)

Quiz Answer Key and Fun Facts
1. According to Genesis 25:25, who was born red all over?

Esau, the son of Isaac and Rebekah and the twin brother of Jacob, is the correct answer. According to Scripture, Esau was red at birth and he was "like a hairy garment all over." Meanwhile, Scripture tells of Jacob being born shortly afterwards "and his hand took hold of Esau's heel." Notes in the NKJV Study Bible state Esau means 'Hairy' while Jacob means 'Supplanter'. Details about Rebekah giving birth to the twin boys can be found in Genesis 25:25-26.
2. According to Genesis 25:30, who fed his brother red stew?

Jacob is the correct answer. According to Scripture, Esau sold his birthright to his twin brother Jacob for a pot of red stew, as per Genesis 25:30. Later, Jacob would deceive his father Isaac into blessing him over Esau. Details about Jacob fraudulently obtaining Esau's blessing can be found in the 27th chapter of Genesis.
3. According to Numbers 19:2-3, who was commanded by God to kill a red heifer?

Eleazar, the priest, was commanded by God, via Moses and Aaron, to slaughter a red heifer. The heifer was to be killed as part of the laws of purification outlined in the 19th Chapter of Numbers. (See Numbers 19:1-4 for details.)
The rest of the chapter concentrates on the laws of purification.
4. According to the KJV, who had a pavement of red marble? (The NKJV and the NIV do not use the color red.)

Ahasuerus, the king of Persia, had spectacular wealth and some of the details are recounted in Esther 1. (In the NIV, Ahasuerus is known as Xerxes.) According to Verses 5 and 6, the garden of the king's palace was a sight to behold with its "white, green, and blue, hangings, fastened with cords of fine linen and purple to silver rings and pillars of marble." The verses go on to state "the beds were of gold and silver, upon a pavement of red, and blue, and white, and black, marble." In other words, there was a rainbow of colors with red being featured as well.
5. According to Genesis 49:12 in the KJV, who had eyes red with wine? (The NKJV and the NIV do not use the color red.)

Jacob made the statement about Judah having red eyes in his last words to his twelve sons, as per Genesis 49. In his statements pertaining to Judah, Jacob proclaimed "his eyes shall be red with wine, and his teeth white with milk."

Judah was one of twelve sons of Jacob, and a founder to the twelve tribes of Israel.
6. According to 2 Kings 3:21-22, who saw water as red as blood?

The Moabites is the correct answer, as per 2 Kings 3:21-22. According to Scripture, the Moabites rebelled against Israel and when their soldiers looked at an unnamed body of water they believed they were looking at blood as it was so red. Scripture states the Moabites saw the red water as a sign to attack the Israelites as it appeared their enemies had fallen out with each other.

It was a deadly miscalculation, as Scripture goes on to tell of the Israelites scoring a decisive military victory.
7. According to Exodus 25:2-5, who gave offerings of red rams' skins?

The Israelites were commanded by God to make offerings that included a number of things, including ram skins dyed red, as per Exodus 25:5. The instructions were given by God to the Israelites while they were in a forty-year transition, traveling from Egypt to Canaan. Scripture goes on to give precise instructions for construction of the Ark of Testimony.
8. According to Matthew 16:1-3, who predicted the weather by a red sky?

They took great exception to Jesus' statement He was the Son of God and were incensed He broke the law by healing people on the Sabbath. They were also infuriated over the fact Jesus associated with "sinners and tax collectors."
9. Who had a vision in which he saw red horses?

Zechariah had a vision in which he saw red horses, as per Zechariah 1:8. According to notes in the NKJV Study Bible, Zechariah means 'Yahweh Remembers'.

Zechariah lived and prophesied during the period following the Babylonian captivity, 597 to 538 B.C. He is responsible for writing the book that bears his name in the Hebrew Bible and the Old Testament of the Christian Bible.
10. Who had a vision in which he saw a red dragon with seven heads?

John, the writer of the Book of Revelation, is the correct answer. Revelation 12:3-4 gives details about John's vision in which he saw a red dragon with seven heads. Revelation is the last book of the New Testament of the Christian Bible. John wrote the book while in exile on the island of Patmos in the Aegean Sea, as per Revelation 1:9. Tradition holds the writer was one of the Twelve Disciples of Jesus, but some modern-day theologians dispute this claim.

Revelation is a book that has perplexed readers for centuries and many people report getting different messages after reading it. However, an old country pastor once told me many people try to make the perplexing book even more complex. Instead, he said, people should try to simplify the book and see it as a tale of two cities. While Babylon faces an horrendous future, the people of the New Jerusalem are promised a glorious future.
Source: Author Cowrofl 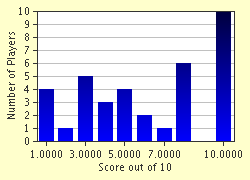