The Colors of the Bible Trivia Quiz

There are many colors mentioned in the Bible. This quiz will looks at ten of those colors.

Quiz Answer Key and Fun Facts
1. What baby, when born, came out red and hairy according to the King James Version?

It says in Genesis 25:25 "And the first came out red, all over like an hairy garment; and they called his name Esau."

By contrast Jacob came out without hair.

Interestingly enough it says in verse 22 that the boys struggled together in the womb. Throughout their life they would continue this struggle.
2. In Leviticus 13:30 of the King James Version, what color does it say the person's hair will be when the priest declares him unclean?

It says in Leviticus 13:39 "Then the priest shall see the plague: and, behold, if it be in sight deeper than the skin; and there be in it a yellow thin hair; then the priest shall pronounce him unclean: it is a dry scall, even a leprosy upon the head or beard."

Perhaps this is a symptom of leprosy back then, because later in the chapter they do mention leprosy.
3. Psalm 23 is a popular passage. In the King James Version, which verse mentions the word green?

Psalm 23:2 says "He maketh me to lie down in green pastures: he leadeth me beside the still waters.

This verse talks about how God can calm us when we are anxious or afraid.
4. What color were the captains and rulers clothed in, in Ezekiel 23:6 (King James Version)?

Ezekiel 23:6 says, "Which were clothed with blue, captains and rulers, all of them desirable young men, horsemen riding upon horses."

Ezekiel was a prophet and was prophesying the troubles Samaria and Jerusalem would face because of their actions.
5. When the soldiers were mocking Jesus before they crucified him, what color robe did they make him wear, in the KJV?

It says in John 19:2, "And the soldiers platted a crown of thorns, and put it on his head, and they put on him a purple robe." Purple is considered the color of royalty. They were mocking him because they did not believe he was the King of Kings.
6. In Song of Solomon (KJV) what color was the hair of the man?

It says in Song of Solomon 5:11 "His head is as the most fine gold, his locks are bushy, and black as a raven."

The Song of Solomon is a beautiful love story between a husband and a wife. Many people feel this book of the Bible should not be read by children until they become adults because of the content.
7. In the story of Joseph, what color baskets did the chief baker have in his dream? (KJV)

It says in Genesis 40:16, "When the chief baker saw that the interpretation was good, he said unto Joseph, I also was in my dream, and, behold, I had three white baskets on my head".

It says in Acts 19:24, "For a certain man named Demetrius, a silversmith, which made silver shrines for Diana, brought no small gain unto the craftsmen."

Diana is the Roman god of the hunt, the moon, and giving birth. It was not uncommon for the Romans to build shrines or alters to certain gods that they believed in.
9. In Revelation, when John describes Heaven what color did he say the city was? (KJV)

It says in Revelation 21:8, "And the building of the wall of it was of jasper: and the city was pure gold, like unto clear glass."

John got a brief glimpse of what Heaven would be like and wrote about it in the book of Revelation. At the time he was on Patmos Island as a form of punishment for worshipping Jesus as Messiah.
10. In Isaiah, in the KJV, what color did he compare our sins to?

The reason they shall be white as snow, many Christians believe, is because Jesus' blood when he died on the cross wiped our sins away if we ask for forgiveness. It says in Psalms 103:12, "As far as the east is from the west, so far hath he removed our transgressions from us" (KJV). Transgressions is another word for sin.
Source: Author Ilona_Ritter 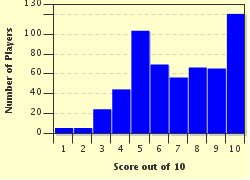