'The Black and White' on Purple in the Bible Quiz

In Biblical days, the color purple was associated with royalty and kingship. Today, it might not be everyone's favorite, but purple is clearly one of the more popular colors in the Bible. Don't believe me? Try this quiz. (The NIV was used for this quiz.)

Quiz Answer Key and Fun Facts
1. The color purple is mentioned 51 times in the New International Version of the Bible, with 42 occurrences in the Old Testament and nine in the New Testament. In one Old Testament book, purple appears 26 times, more by far than any other book. The references are in regards to instructions for constructing the Tabernacle as well as related items. Can you name the book?

Yes, Exodus is the correct answer. The references to the word purple start at Exodus 25: 4 and conclude at Exodus 39:29.
2. Acts 16: 14 tells of Paul converting a woman from Thyatira who was a dealer in purple cloth. What was the woman's name?

Yes, Lydia is the correct answer. Acts 16: 40 states that after Paul and Silas spent a night in jail, in which they converted the chief jailer, they were released. They then went to Lydia's house where they met with other believers and left encouraged.
3. The following passage is from the NIV Bible (John 19: 1-3) and contains the word purple. Fill in the missing four words in the blank: "Then Pilate took Jesus and had him flogged. The soldiers twisted together __________________ and put it on his head. They clothed him in a purple robe and went up to him again and again, saying, 'Hail, king of the Jews!' And they struck him in the face."


Answer: a crown of thorns

The correct answer is a crown of thorns. Verses 5 and 6 tell of Jesus, dressed in a purple robe and a crown of thorns, appearing before the chief priests and their officials. They shouted, "Crucify! Crucify!"
4. The following passage is from the NIV Bible and contains the word purple: "The woman was dressed in purple and scarlet, and was glittering with gold, precious stones and pearls. She held a golden cup in her hand, filled with abominable things and the filth of her adulteries." From what book is this passage?

The correct answer is Revelation, with the passage in question coming from the 4th verse of the 17th chapter. Verse 5 goes on to state the woman had written on her forehead: "MYSTERY, BABYLON THE GREAT THE MOTHER OF PROSTITUTES AND OF THE ABOMINATIONS OF THE EARTH." (The capital letters are in the verse itself.)
5. Luke 16: 19-31 tells of a rich man who was dressed in purple and fine linen and lived in luxury every day. At his gate was a beggar, covered with sores and longing to eat what fell from the rich man's table. Even the dogs came and licked his sores. What was the name of the helpless beggar?

Yes, the correct answer is Lazarus. Scripture tells of Lazarus and the rich man dying, with Lazarus ending up by the side of Abraham and the rich man in a place of torment. When the rich man requests that Lazarus come and dip the tip of his finger in water and cool his tongue, Abraham tells him this is not possible because there a "great chasm" and no one can cross over it.
6. The following passage is from a chapter in the NIV Bible which is largely about a wife of noble character: "She makes coverings for her bed; she is clothed in fine linen and purple." In what book would you find this verse?

The correct answer is Proverbs. The verse in question is from the 22nd verse of the 31st chapter. Much of the chapter is about a wife of noble character being worth far more than rubies.
7. In what book in the NIV Bible would you find the following verse that contains the word purple? "Mordecai left the king's presence wearing royal garments of blue and white, a large crown of gold and a purple robe of fine linen. And the city of Susa held a joyous celebration. For the Jews it was a time of happiness and joy, gladness and honor."

The correct answer is Esther. The verses in question are 15 and 16 in the eighth chapter. Mordecai was a cousin of of Queen Esther, whose real name was Hadassah, according to Esther 2: 7.
8. The following passage is from 2 Chronicles 2: 7 in the NIV Bible. "Send me, therefore, a man skilled to work in gold and silver, bronze and iron, and in purple, crimson and blue yarn, and experienced in the art of engraving, to work in Judah and Jerusalem with my skilled craftsmen, whom my father David provided." In this passage, who is doing the speaking?

The correct answer is Solomon. The second chapter of 2 Chronicles is about preparations for building the Temple.
9. In the following verses in the NIV Bible, Moses gets instructions from the LORD to receive offerings for an upcoming project: "These are the offerings you are to receive from them: gold, silver and bronze; blue, purple and scarlet yarn and fine linen; goat hair; ram skins dyed red and hides of sea cows; acacia wood; olive oil for the light; spices for the anointing oil and for the fragrant incense; and onyx stones and other gems to be mounted on the ephod and breastpiece." In what book of the Bible would you find this passage?

The correct answer is Exodus, with the passage in question coming from verses 3-7 in the 25th chapter. The chapter is about offerings for the Tabernacle, the Ark, the Table and the Lampstand.
10. Complete the missing three words from this NIV scripture from Lamentations 4: 5: "Those who once ate delicacies are destitute in the streets. Those nurtured in purple now lie __________________."

The correct answer is on ash heaps. The book of Lamentations is largely a lament of the misery to be inflicted upon Jerusalem.
Source: Author Cowrofl 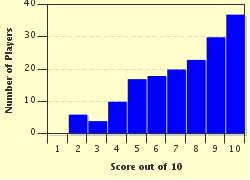