Heroes of the Faith Trivia Quiz

This quiz focuses on the following people in the Old Testament: Noah, Abraham and Sarah, Joseph and Moses. All quotes taken from NIV.

Quiz Answer Key and Fun Facts
1. How many people were on the ark altogether?


Answer: a hundred and twenty years

The Lord had become displeased with men when he saw how much their wickedness had grown, and this was what made him decide to send the flood.
3. About how old was Noah when the flood started?

Genesis 7:11 "In the six hundredth year of Noah's life...the floodgates of the heavens were opened." The flood lasted for one year and ten days, and he died at the age of 950.
4. Which of the following was NOT one of Noah's three sons?

Genesis 7:13 lists them: "...Noah and his sons, Shem, Ham and Japheth..." The Jews were descended from Shem, hence the reason they are also known as Semites.
5. What was the covenant between Noah and God that the rainbow in the clouds represented?


Answer: God would never again destroy all life with a flood

God promised that 'never again will the waters become a flood to destroy all life' (Genesis 9:15). Of course, today there are still many water-related calamities, such as the Dec 2004 tsunami, but throughout history, God has still kept his promise -- a worldwide flood hasn't occurred since Noah.
6. On to Abraham. According to Genesis 17:5, what does the name Abraham mean?


Answer: Father of many nations

Abraham was called Abram at first, which meant 'exalted father', until God renamed him 'father of many' in Genesis 17 when he promised that Abraham would have as many descendants as the stars in the sky.
7. Abraham only had one son.

Sarah is most likely 90 years old as we can infer from Genesis 17:17 that Sarah is 10 years younger than Abraham. Can you imagine any modern-day means of conception causing a 90 year old woman to be able to give birth? This was truly a miracle.
9. When Abraham was about to sacrifice his son Isaac, what did he see trapped in a bush?

God told Abraham to sacrifice his only son as a test of his obedience, and Abraham obeyed God because he believed God would have another way of keeping his promise that he would have many sons. As it was, God provided a ram to sacrifice in place of Isaac, so Abraham named the mountain he was on Jehovah-jireh, which means 'the Lord will provide.' The account is in Genesis 22.
10. What was Sarah's relationship to Abraham?

Abraham lied many times that Sarai was his sister as he was afraid that rulers such as Pharaoh would kill him and take her as his wife. While it was true that Sarai was his half-sister, this lie caused much grief and suffering within the households of Pharaoh (Genesis 12:10-20) when he took Sarai as his wife and Abimelech (Genesis 20) when he chose to take Sarah (her name had been changed) as his wife since they thought she was single.
11. Now comes the next character, Joseph. How many brothers (including his half-brothers) did Joseph have?


Answer: He was accused of trying to sleep with Potiphar's wife.

Potiphar's wife found him well-built and handsome and tried to get him to sleep with her, but he ran away leaving his cloak behind. Potiphar's wife then used the cloak to frame Joseph, and he was then thrown into prison (Genesis 39:7-20). As an interesting bit of trivia, it was Moses who killed an Egyptian and was then forced to run.
13. What was Joseph's special talent that helped him to get out of prison?

When he was in prison, he interpreted the dreams of the king's baker and cupbearer, and afterwards the dream of Pharaoh. The baker was executed, but the cupbearer restored. It was the cupbearer who later remembered Joseph's talent and recommended him to Pharaoh to help interpret his dream. (Genesis 40)
14. What did the Pharaoh's two dreams mean?

The Pharaoh had two dreams, one of seven thin cows eating seven fat cows, and the other of seven thin heads of grain swallowing seven good ones. This symbolised that there would be seven years where Egypt would have much food, and then seven years of famine. This warning enabled Pharaoh to take action. (Genesis 41:1-40)
15. In the end, did Joseph forgive his brothers for selling him?

Forgiveness is always a great virtue. When Jacob died, he instructed his sons to ask Joseph "to forgive [his] brothers the sins and the wrongs they committed in treating [him] so badly." (Genesis 50:17) Joseph forgave them and promised to provide for them and their children.
16. Last character: Moses. What was the princess doing when she found Moses in the river?

"Then Pharaoh's daughter went down to the Nile to bath..." (Exodus 2:5) Ironically, it was the Pharaoh who ordered all Hebrew baby boys to be killed, and now it was his daughter who was saving one.
17. Who was the wife of Moses?

Miriam was Moses' sister, and Asenath was Joseph's wife. Moses was on the run in the desert after having killed an Egyptian (Exodus 2:12) and took refuge with Jethro, who then gave Zipporah to Moses as a wife.
18. Which of these was not one of the miracles Moses experienced at the burning bush?


Answer: Moses took some water from a nearby river and it turned to blood.

When Moses picked up the snake by the tail, it turned back into a staff, and when he put his hand into his cloak, it became normal. God also instructed him to take some water from the Nile and pour it on the ground before the Egyptians, and it would turn to blood, but this miracle did not occur there as the bush was on Horeb, the mountain of God.

These signs were meant to make the Egyptians believe. (Exodus 3:1-4:8)
19. Which of these was not one of the ten plagues?

Hail mixed with fire and blood is one of the judgments described in Revelation. In the ten plagues there was a plague of hail, and it was even mixed with fire, but there was no blood involved; that was a separate plague.It was described as "the worst storm in all the land of Egypt since it had become a nation". (Exodus 9:24) The other plagues can be found in the full account of the plagues from Exodus 7:14-12:25.
20. After crossing the Red Sea, God told Moses to raise his staff and stretch his hand over the sea so that the waters may flow back over the Egyptians and chariots and horsemen. (According to NIV)

Exodus 14:26 "Then the LORD said to Moses, "Stretch out your hand over the sea so that the waters may flow back over the Egyptians and their chariots and horsemen." God never mentioned raising his staff, but Moses was told to raise his staff only when he wanted to cause the Red Sea to part.
Source: Author armageddon4291 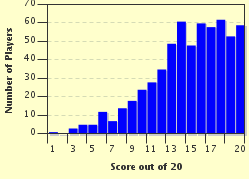 
Other Destinations
Explore Other Quizzes by armageddon4291