I just read the King James Version of the Bible, and found some really strange words. Do you know what they mean?

Quiz Answer Key and Fun Facts
1. In the King James Version, I found the word "Matrix." What does it mean in this translation of the Bible?

"And the Lord said unto Moses, "Take unto thee sweet spices, stacte, and onycha, and galbanum; these sweet spices with pure frankincense: of each shall there be a like weight." - Exodus 30:34 (KJV)
3. In the New Testament, what in the world is a "firkin"?

"And there were set there six water pots of stone, after the manner of the purifying of the Jews, containing two or three firkins a piece." - John 2:6 (KJV)

This is the water that Jesus turned into wine.
4. In the Old Testament, who or what were "Nethinims"?


Answer: Assistants to the Levites

"Also of the Nethinims, whom David and the prince had appointed for the service of the Levites, two hundred and twenty Nethinims: all of them were expressed by name." - Ezra 8:20 (KJV)
5. In the New Testament, what does it mean to "eschew"?

"For he that will love life, and see good days, let him refrain his tongue from evil, and his lips that they speak no guile: Let him eschew evil, and do good; let him seek peace, and ensue it." - 1 Peter 3:10-11 (KJV)
6. The Old Testament gives us this word: "Ouches." What on earth could that mean?

"With the work of an engraver in stone, like the engravings of a signet, shalt thou engrave the two stones with the names of the children of Israel: thou shalt make them to be set in ouches of gold." - Exodus 28:11 (KJV)
7. In the New Testament, what is the word "charger" used to mean?

Matthew 14:8, in the King James Version, tells us that the daughter of Herodias danced before King Herod at his birthday party. The king was pleased with her, and promised her anything that she asked for. "And she, being before instructed of her mother, said, 'Give me John Baptist's head in a charger.'"
8. In the King James Version of the Bible, what does "tire" mean?

God had just taken the wife of Ezekiel from him with a stroke, and he told him, "Forbear to cry, make no mourning for the dead, bind the tire of thine head upon thee, and put on thy shoes upon thy feet, and cover not thy lips, and eat not the bread of men." - Ezekiel 24:17 (KJV)
9. In the New Testament, what is the Hebrew word "Gabbatha" used to mean?

"When Pilate therefore heard that saying, he brought Jesus forth, and sat down in the judgement seat in a place that is called the pavement, but in the Hebrew, Gabbatha." - John 19:13 (KJV)
10. In the Old Testament, we find the word "greaves". What does it mean?

In the story of David and Goliath, this was said of Goliath: "And he had greaves of brass upon his legs, and a target of brass between his shoulders." - 1 Samuel 17:6 (KJV)
Source: Author Donna39 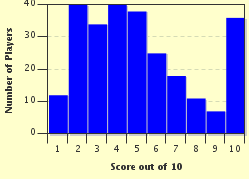 
Other Destinations
Explore Other Quizzes by Donna39