As a follow-up to my most popular quiz, I present more definitions of Biblical words. Again, these come from my New King James Version study Bible.

Quiz Answer Key and Fun Facts
1. What word, found in English translations of the Bible, means "to ask" as in a prayer?

We find in Ruth 1:16 that Ruth earnestly makes this poetic plea to Naomi: "Entreat me not to leave you, or to turn back from following you. For wherever you go, I will go..."

A common practice in the Old Testament was for the people to raise uplifted hands to God while expressing their petitions to Him. They believed that God would fill their empty hands with blessings.
2. "To make holy" or "to set apart" are definitions of what word found in several passages of the Bible?

When we dedicate or declare distinct an object or person to the holiness of God, we consecrate him, her or it. The Bible says that God consecrated the nation of Israel by delivering them from the bonds of slavery in Egypt. Christians believe that they have been consecrated or delivered from sin through Jesus' death on the cross.
3. What Biblical word that today has come to mean any happy festival actually meant a special feast celebrated every fiftieth year?

Literally translated from Hebrew, Jubilee meant "ram's horn" or "ram" or even "trumpet". This was because of the blowing of a ram's horn trumpet to signify the fiftieth-year celebration. During this feast, slaves were delivered from bondage, debts were forgiven, land was left fallow and family property was redeemed. A brief description of Jubilee is given in Leviticus 27.
4. Which of these words, which in the Bible is almost always directed to God, signifies a petition for favor or mercy?

Although the word is indeed regularly directed to God, Jeremiah twice used the word directed to a king. Generally, the word is used in times of impending distress. In Psalm 6, God specifically heard the supplication of David, Solomon and King Manasseh.
5. Many people in the Bible have been guilty of transgressing. What does the word "transgress" mean?


Answer: to step over

Often the word is used to describe something done willfully or maliciously; however, transgressions are frequently committed unintentionally. Transgressions are mostly against God, but may also be committed against other individuals or entire communities. 2nd Chronicles 12 details what happened when the people of Jerusalem had transgressed against the Lord.

It comes from a Latin word (transgredi) which means "to step across, or step over", in the same sense as we today say that someone has "crossed the line".
6. The name of what heavenly creatures, which are only mentioned twice in Scripture, is derived from a verb meaning "to burn with fire"?

In Revelation 4:6-8 we read about the seraphim that surround God's throne. Seraphim are supposedly of a fiery appearance, which is related to their role in purification. These beings purified Isaiah's lips with a live coal in Isaiah 6:6.
7. This Biblical word refers to a type of poetic song of grief with a distinctive meter. What melodious word is this?

Songs such as these were sung during funeral rites. Often the prophets used the word lamentation to express the impending death of Israel and other nations because of their sinfulness. An entire book of the Bible is named for this type of song of grief.
8. Early Christians were sometimes known as "Those of the _____". What word that signifies purification goes in the blank?

The phrase "those of the circumcision" is used in Titus 1:10, for example. By fulfilling the covenant with God to undergo circumcision, believers set themselves apart from unbelievers, though the necessity of this practice was subject to debate among early Christians.

In modern times, this practice among some Christians has become more of a physical health issue than a spiritual health issue. Some believers do, however, still practice this rite as a spiritual issue.
9. My Hebrew name, which quite likely was derived from Egyptian, means "son" or "deliver", but may also mean "to draw out". Who am I?

In Exodus, we find the story of how Moses was drawn out of the water and became a son to Egyptian royalty, and later was used by God to deliver His people out of bondage. Even though Moses felt he was unworthy, God performed many miracles through Moses, including the parting of the Red Sea.
10. Even though one of the meanings of my name is "rest", I probably didn't get much rest while spending some time afloat. Who am I?

We don't know from Biblical accounts whether Noah did indeed get any rest, but considering the amount of animals in his care during the flood (Genesis 5-9), we can only imagine the amount of work required.

Thanks for learning more about Biblical words (and names this time) with me. I hope you enjoy this quiz as much as my first Biblical definitions quiz. Blessings to all!
Source: Author cat_brat63 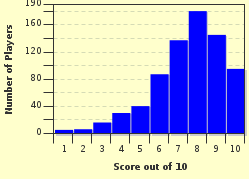