What can this mean? Trivia Quiz

There are words in the King James Bible that have intrigued me. I thought I would find out what they might mean, and share them with you.

Quiz Answer Key and Fun Facts
1. In the Psalms one often sees the word "Selah" at the end of a verse. There is some controversy, but which is generally agreed upon as the closest meaning?

As a lot of the Psalms were accompanied by music, it is also thought to be a suspension of the music.
2. Jesus accused the scribes and Pharisees of making "broad their phylacteries" in Matthew 23:5. What was a phylactery?


Answer: A leather case containing a piece of written scripture.

Sometimes the scripture writings were also sewn into a piece of cloth; these were then carried on the person's arm or tied to his forehead.
There is very interesting information on phylacteries online at JewishEncyclopedia.com if you would like to know more about the meaning, whys and wherefores.
3. There is a creature, a leviathan, mentioned in Job, Psalms, on two occasions, and Isaiah that sounds fearsome! In Isaiah he is described as a "_____ _____"(Isaiah 27:1, King James Version).

The definition in the Strong's concordance is "a wreathed animal, a serpent". In modern Hebrew it means simply "whale". I would not wish to meet him!
4. What is a "habergeon"?

Habergeon is spoken of three times in the Bible: twice in Exodus 28:32 and 39:23, and also in Job 41:26.
5. Shigionoth is the plural of shiggaion, and the suggested meaning of this is a poetic mode describing emotions or wandering. We find this written at the beginning of Psalm 7 and also at the beginning of Habakkuk 3. What best describes what the author is doing in both passages?


Answer: Making a plea to God

The Psalms are still wonderful prayers to God, as is, and most of our human emotions can be found reflected in them. We have moved many years in time, but emotions remain much the same! In Psalms 7:1, David pleads, "Save me from all those who persecute me; And deliver me..."
6. This spice was brought by the three wise men to the baby Jesus as a gift with gold and frankincense in Matthew 2:11.

Myrrh is a fascinating! It is a reddish brown substance, dried tree-sap. It is mentioned numerous times in the Bible. It was used often as a gift to show homage, as above. Jacob also sent some with his sons when they went to Egypt to buy grain from Joseph during the famine (Genesis 43:11).
In Esther we hear of it being used as a beauty preparation for the King of Persia's harem women (Esther 2:12).
It is mentioned frequently in Song of Solomon where it is used as a perfume.
It was traded by the Ishmaelites in Genesis 37:25.
It was used in the temple with other spices (Exodus 30:23).
It was also mingled with wine in a cup and offered to Jesus on the cross (Mark 15:23).
7. The word "hin" is mentioned numerous times in the Old Testament as a liquid measure. Approximately how much was a "hin"?

12 'logs' were equal to one 'hin', and 6 'hin' were equal to a 'bath'. The 'bath' was also the equivalent of an 'ephah'.
8. What was the bronze washbowl called that God instructed Moses should be made and "placed between the tabernacle of the people and the altar"? (Exodus 30:18)

The laver was for Aaron and his sons to wash their hands and feet before ministering. Exodus 30 gives the procedures to prepare for worship.
9. Which money was used in the Old Testament times to pay for temple tax and so forth?

This was an ancient unit of weight and currency. Half a shekel was called a bekah. Originally a shekel was 11 grains (about 11 grams).
Ephah is a measure.
Miletus is a place to which Paul travelled.
Micah was a prophet.
10. In Exodus and in the Psalms we hear mention of a "Timbrel", a musical instrument that was played by the Israelites in worship. What can it be likened to?

In Exodus 15:20, Miriam and all the women danced and played their timbrels in thanksgiving to the Lord after He saw the Israelites safely across the Red Sea, engulfing Pharaoh and his men in water once the Israelites had passed.
Source: Author Gandi 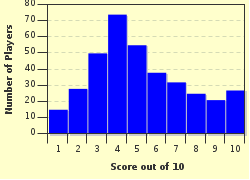 Related Quizzes
1. What's In A Name? Tough
2. Biblical Words Tough
3. Rooted In The Bible - Origins of Popular Phrases Average
4. Strange words in the Bible Tough
5. King James vs. Douay-Rheims Average
6. Bible: A Little Old, A Little New, A Lot of Fun Average
7. More Biblical Definitions Average
8. The Gospel According to Aslan Tough
9. The Biblical Garden Average
10. Bread in the Bible Average
11. And In the End Easier
12. Complete the Biblical Quote Very Easy


Other Destinations
Explore Other Quizzes by Gandi