Rooted In The Bible - Origins of Popular Phrases Quiz

Many of the words and phrases that we commonly use in the English language today have their roots in the Bible. Here are questions about 10 of them.

Quiz Answer Key and Fun Facts
1. Kiss of death: This phrase has its origins in the Bible. To what event does it refer?


Answer: The betrayal of Christ by Judas Iscariot

The New Testament tells us that Judas led soldiers to the Garden of Gethsemane and identified Jesus to them by kissing him.
In modern times it is often used to refer to a singular incident that damned an action or person to failure or disaster. (For example: "Gordon Brown's description of a grandmother as a 'bigoted woman' was the kiss of death for Labour's re-election chances in 2010.")
2. Feet of clay: This phrase has its origins in the Old Testament. Which king dreamt of a statue that had feet of clay?

The King of Babylon dreamt of a statue that had a head of gold, a torso of silver, a belly of bronze and feet of iron and clay.
The prophet Daniel interpreted that as meaning a character weakness or flaw.
A modern example might be: "Richard Nixon portrayed himself as a man of principle, but his attempts to clear himself of any blame over Watergate showed he had feet of clay".
3. Forbidden fruit: To which incident in the Bible does this phrase allude?


Answer: Adam and Eve eating from the Tree of Knowledge

God forbade Adam and Eve to eat the fruit of the Tree of Knowledge. The serpent persuaded Eve to eat it and she persuaded Adam. As a result of this defiance, God cast them out of the Garden of Eden.
In modern use, a forbidden fruit is something that is pleasurable but at the same time wrong, illegal or immoral.
("Forbidden Fruit: Microsoft Workers Hide Their iPhones" was a "Wall Street Journal" headline in March 2010.)
4. Shibboleth: In our modern world, a shibboleth is described by some dictionaries as "A custom, belief or particular use of language that characterises members of a particular group." From which Biblical episode did the word originate?


Answer: The victory in battle of the Gileadites over the Ephraimites

The Gileadites knew that because of a difference in their dialect, the Ephraimites could not pronounce the Sh sound in Shibboleth; instead they could only say Sibboleth. Anyone claiming to be a Gileadite after the battle was asked to say the word to establish their identity.
Today, we might use it to describe a slogan, platitude or a term spoken in reverence. For example: "Words like seasonal, local, or best of all, green market, were shibboleths for every self-respecting cook from potato peeler on up" (from 'Time' magazine, February 2010.)
5. Fig leaf: When we speak of a fig leaf in modern times, we think of something that is used for concealment. Where do the biblical origins lie?


Answer: The leaves that Adam and Eve used to hide their nakedness

After eating the forbidden fruit in the Garden of Eden, Adam and Eve realised they were naked and used kilts of fig leaves to cover themselves.
An example of the modern usage is: "China's growth is no fig leaf for the real source of CO2 emissions: the UK". This headline from 'The Guardian' newspaper online went on to say: "China is blamed for soaring carbon emissions and used as an excuse for the west to do nothing on climate change - when in fact we are exporting our emissions there." (February 2010).
6. Armageddon: It was sometimes said that a nuclear war between the Soviet Union and the West would lead to Armageddon. The word appeared in the Bible, but only once. Where?


Answer: The Book of Revelation

"Then they gathered the king together to the place that in Hebrew is called Armageddon" - Revelation 16:16.
The word became associated with any final or decisive confrontation.
7. Doubting Thomas: The original Doubting Thomas was a disciple who refused to believe in the Resurrection until he saw Christ and could touch his wounds.

Thomas was not initially present when Christ revealed himself to the other disciples. When they told him, he said he would not believe it until he saw him and touched the wounds. Jesus made this into a parable about those who believed when they saw evidence and those who believed without seeing. A modern usage might be: "Those doubting Thomases who said that Wayne Rooney could never play in complete comfort alongside Peter Crouch were proved wrong when they saw England's performances at the 2010 FIFA World Cup". (Since this quiz was written three days before the World Cup started, that might well be "proved right".)
8. Straight and narrow: This phrase is used to mean doing something properly and in spite of the temptation to deviate to an easier way. Who, according to the Gospel of Matthew, first alluded to the phrase?

Matthew quoted Christ thus: "Strait is the gate and narrow is the way which leadeth unto life". (Chapter 7 verse 14).
An example of modern might be: "Even though he was pressed to support the quick gains that violence seemingly offered, Mohandas Gandhi stuck to his straight and narrow principles of non-violence."
9. Good Samaritan: The phrase 'Good Samaritan' is one that has its roots in a passage of scripture. In the parable told by Christ, how many people ignored a wounded traveller before the Samaritan helped?

In Luke 10:30-37, Jesus spoke of a man who had been beaten and robbed and left by the side of the road. A priest and a Levite saw, but hurried past. It was a Samaritan - who would be seen as hostile to the Jews - who stopped to help.
It became associated with anyone who went out of his or her way to help another person. For example: "Even though he was in a hurry to get to work, Kyleisalive became a good Samaritan when he stopped to help when he saw Agony standing beside her broken down car."
10. Kingdom Come: When we use the phrase kingdom come in modern times, we often mean a spectacular or violent death or demise. What were its Biblical origins?


Answer: A prayer taught by Jesus to his followers

"Our father, who art in Heaven
Hallowed be they name
Thy Kingdom come..." (Matthew 6:10)
A modern usage might be: "When Rio Ferdinand got injured before the start of the 2010 World Cup, it blew England's victory chances to Kingdom Come."
Source: Author darksplash 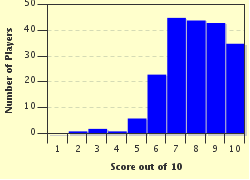 Related Quizzes
1. What's In A Name? Tough
2. Biblical Words Tough
3. What can this mean? Difficult
4. Strange words in the Bible Tough
5. King James vs. Douay-Rheims Average
6. Bible: A Little Old, A Little New, A Lot of Fun Average
7. More Biblical Definitions Average
8. The Gospel According to Aslan Tough
9. The Biblical Garden Average
10. Bread in the Bible Average
11. And In the End Easier
12. Complete the Biblical Quote Very Easy