Quiz Answer Key and Fun Facts
1. A letter (or shape) that represents a number.

'X' is the first variable we usually think about, But any letter can be used. Sometimes its helpful to use the first letter of a word, like 's' for speed, or 'h' for height.

In elementary school, children have open boxes or circles for them to fill in numbers to solve an equation. Those boxes are serving as variables.
2. All the numbers that can be found on a number line.

Real numbers include numbers that are used in counting, zero, the opposite of counting numbers, fractions, and decimals (fixed, repeating, and nonrepeating).

The only numbers not a number would be NOT Real numbers or Imaginary numbers.
3. An equation that is true for all values of a variable.

The solution is the set of values for a variable that makes the equation true. A variable is a term or factor found in expressions and equations.

In math, identity means value stays the same, like 4 + 0 = 4 (zero is an additive identify). When all variable values make an equation true, like 3(x+2)=3x+6, the equation is an identity, because its always the same.
4. On a coordinate plane, the point a line crosses the y-axis.

The origin is where the x-axis (horizontal) crosses the y-axis (vertical). Intersection are when two lines cross.

The x-axis and y-axis are not lines, they are references, like the axis that the earth rotates around -- it is an imaginary reference line that helps explain the earth's movement. So it is more like a football player intercepting a pass. The path of the ball is not a real line, it just explains the movement of the ball. Thus: intercept.
5. A line that most closely describes the relationship between points on a 'scatter plot'.

Correlation describes data trends (positive or negative). A best-fitting line more specifically relates the scattered points to each other with a line that best adheres to the points. The line will have an equation, which can be written a slope-intercept form (y=mx+b), where 'm' represents the slope of the line.
6. The value that represents the middle of a set of values (50% greater than the value and 50% less than the value)

Measures of Central Tendency are values that describe a set of numbers, like ages or scores, with a single number. Median identifies the middle number; Mode, the number that occurs most; Mean, the average of all the number; and Range, the difference of the smalles and largest number (or simply the smallest and largest numbers).
7. The number of solutions for a system of linear equations (two or more related equations)


Answer: All of these answers are possible

The number of solutions that can be best represented by drawing two straight line. There are three possibilities: 1) they are parallel and do not intersect (0 solutions), 2) they cross at a point (1 solution), or 3) they are drawn on top of each other (an infinite number of solutions).
8. You deposit $1000 in the bank at 4% compounded daily for 5 years. Mathematically, what do you call the '4%'?

A quadratic function is an equation with two variables, where one of the variables has an exponent of 2. The quadratic formula is used to solve a quadratic equation (one variable).

A parabola shaped between 'U' and a 'V'. A hypobola requires both variables to have exponents of 2.
10. Which is/are polynomial(s)?


Answer: Both binomials and trinomials

Distracting as the prefix 'poly-' meaning 'many', 'more than one', or 'infinite number', polynomial refers to all expressions, including monomials (1 term), binomials (2 terms), and trinomials (3 terms), as well as expressions with more than 3 terms.
Source: Author harborlaker 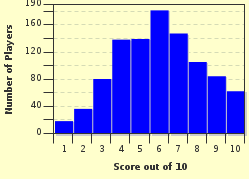 
Other Destinations
Explore Other Quizzes by harborlaker