This is a quiz about the element bromine, and some of its many uses in our daily lives.

Quiz Answer Key and Fun Facts
1. What does the name "bromine" mean?

Bromine is derived from the Greek word "brómos," meaning strong-smelling or stench. It has a very disagreeable odor, something like that of chlorine.
2. Bromine is one of only two elements that exists as a liquid at room temperature.

Along with fluorine, chlorine, and iodine, bromine belongs to the group of elements called halogens. The word halogen means "salt former." Bromine is highly corrosive and will react with most metals to form bromide salts. It will also react with organic compounds, and great care should be used when handling it in its pure state.
4. Bromine was isolated as an element in 1825. Bromine compounds found their first major application in which field?

Silver bromide is very sensitive to light, and soon found applications in early photographic processes. Much of the bromine produced today is still used in photography, although with the increasing use of digital cameras, the amount utilized in this field is rapidly decreasing.
5. Another early application of bromide compounds was in medicine. Bromide salts, such as sodium bromide and potassium bromide, were used as what?

Many bromide salts have a sedative quality, or tranquilizing effect, and were widely used for this purpose in the late 19th and early 20th centuries. Eventually more effective drugs were discovered, and the use of bromides as sedatives for humans was banned in the United States in 1975 over concerns about the toxicity of long-term use.

Other bromine compounds are still used in medicine. One popular over-the-counter remedy, Bromo-Seltzer, originally contained high quantities of sodium bromide, and was a popular hangover cure.

The modern formula does not contain any bromine.
6. Another once-popular use of bromine compounds fell out of favor due to environmental concerns. Bromine compounds were once used in large quantities to manufacture what product?

The addition of a compound called tetraethyl lead began to be added to gasoline in the 1920s to improve engine performance and enhance fuel economy. Along with the lead, a compound called ethylene bromide (C2H4Br2), was added to prevent the lead from depositing on the engine parts.

In the United States, leaded gasoline began to be phased out in 1974, and was banned in motor vehicles in 1996. It is still used in aviation fuel, farm equipment, auto racing, and some marine engines.
7. Widespread use of methyl bromide (CH3Br) is seen as one of the major causes causes of ozone depletion in the Earth's atmosphere.

Methyl bromide was once widely used as a pesticide, fumigant, and soil sterilizer. Most of the compound used escapes into the atmosphere and reacts readily with ozone. Because of environmental concerns, methyl bromide was supposed to be phased out in accordance with the Montreal Protocol on Ozone Depleting Substances.

The United States has successfully lobbied for exemptions and still allows limited use of the compound in growing certain crops, such as strawberries and tomatoes, where no effective substitute has been found, and for sterilizing wooden packaging materials.
8. The major use of bromine compounds in the early twenty-first century is in what area?

The addition of bromine compounds to plastics and some natural materials makes ignition more difficult, and slows down the spread of fire (by a factor of up to 15 times) allowing time for people to escape. The circuit boards in your computer probably contain brominated flame retardants.

They are widely used in computers, TVs, mobile phones, textiles, and mattresses. More than 70% of electronic appliances contain brominated flame retardants. They are also used in a wide range of materials and textiles for upholstered furniture, drapes, and carpets.
9. Assume you have some liquid bromine. You should be very careful to avoid it coming into contact with your skin, but also with what other material?

Bromine reacts violently with aluminum! It will actually generate enough heat to melt the aluminum, which then floats on top of the bromine and and burns with a red flame while scattering aluminum droplets everywhere. There are several videos online showing what happens when you dip aluminum foil into liquid bromine. Bromine will actually react with most metals, although not in such a dramatic fashion. Lead and gold are relative inactive when exposed to bromine; it is usually stored and shipped in lead-lined tanks. Bromine does not react with glass, either. Bromine is very caustic and can cause severe burns if it comes into contact with your skin.
10. Did you ingest some bromine today? During the first decade of the 21st century, what common beverage often contained small amounts of bromine compounds?

A substance called brominated vegetable oil (BVO) is added to about 10% of all soft drinks sold in the United States and Canada; it is banned in Europe as a food additive. It acts as an emulsifier in citrus flavored drinks. While it is considered to be safe in small quantities, there have been cases of people coming down with a disease called bromism from drinking two to four liters of soda daily for extended periods of time. Bromism can cause psychosis, seizures and delirium.

When bromine compounds were used in over-the-counter drugs, it was much more common than it is today.

In 2014, both Coca-Cola and Pepsi announced they planned to remove brominated vegetable oil from their products due to health concerns. It continues to be used in many other brands, however, and the Food and Drug Administration has announced that it still considers low levels of BVO to be safe, and has no plans to ban the substance or conduct investigations into its use. If you are concerned that your favorite soda might contain BVO, check the list of ingredients.
Source: Author daver852 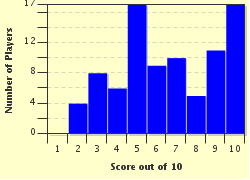