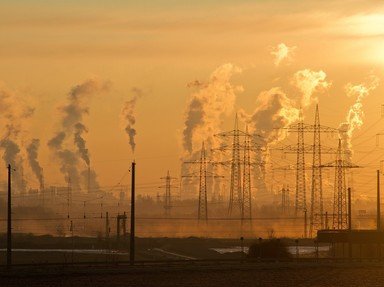 2007 brings increasing evidence that global warming is real. Yet there is still some skepticism regarding its cause and what it will eventually mean for the earth. Take this quiz and learn what climate changes are doing to our planet. Good luck!

Share on Facebook
Share on Twitter
Share by E-Mail
Author
traderider
Time
6 mins
Type
Multiple Choice
Quiz #
257,863
Updated
Dec 03 21
# Qns
10
Difficulty
Tough
Avg Score
5 / 10
Plays
2547
Awards
Top 35% Quiz
This quiz has 2 formats: you can play it as a or as shown below.
Scroll down to the bottom for the answer key.

Quiz Answer Key and Fun Facts
1. In the film "The Inconvenient Truth," Al Gore states that a(n) ________ is the cause of the temperature increases that scientists are observing around the world.


Answer: Thickening of the earth's atmosphere

Former Vice President Gore indicates that uncontrolled release of carbon dioxide is thickening the earth's atmosphere. This increases the amount of heat retained by the earth, since a thicker atmosphere retains more of the energy the earth receives from solar radiation.
2. The year 2005 was a very destructive hurricane season for the Atlantic Ocean and the US Gulf Coast. On the other hand, the year 2006 was relatively quiet for hurricanes in that area. Does this mean that global warming is unequivocally false?

Temperature measurements indicate that a weak El Nino pattern (which is the warming of the surface waters in the central Pacific Ocean) may have contributed to the relatively quiet Atlantic hurricane season of 2006. However, the long-term temperature increases around the world continued in 2006, which proved to be the warmest year on record for the US.
3. Which of the following alternative fuel technology platforms was the first to be introduced to the mass markets?

The General Motors EV1 was offered for lease primarily in the area of Los Angeles, California, in the late 1990s. The Japanese car manufacturer, Toyota, developed the hybrid design called the Prius partially in response to the introduction of the EV1, fearing that US automobile manufacturers would fully commit to electric cars.

The Prius was introduced a few years after the EV1 and became wildly popular. Of course, the technology for hydrogen fuel-cells is still in its infancy, and is not yet ready for the mass market. And the Toyota Corolla is not an alterative-fuel vehicle.
4. If the observed climate changes continue unabated, which of the following mountains will lose its ice cap in a few years?

Mt Kilimanjaro is located in Tanzania, and the marked decrease in the size of its ice cap in recent years is a matter of record. Mt Everest, Mt Erebus, and Mt McKinley are located in much higher latitudes, so we may assume that these mountains' ice caps are safe for the time being.
5. In the spring of 2007, the US Supreme Court upheld a federal program designed to clean up coal-fired power plants in the US under the auspices of the Clean Air Act. Which federal agency is responsible for enforcing the Clean Air Act?

This ruling reversed one made by a lower court regarding an energy firm (Duke Energy) that upgraded coal-fired power plants in the late 1980s and 1990s. The Supreme Court ruled unanimously that these upgrades violated the Clean Air Act, and is seen by many environmentalists as a blow to the efforts of the Bush Administration to prolong the use of these antiquated coal-fired power plants.
6. In the recent miniseries "Planet Earth" produced by the Discovery Channel, a polar bear was filmed exhibiting very unusual behavior that was attributed to climate change. What was this behavior?


Answer: The polar bear attacked a herd of walruses

Polar bears generally hunt for seals by breaking through the surface of the Arctic ice sheets. However, global warming is thinning and melting these ice sheets more quickly in the spring, so some polar bears swim some distance into ocean waters in search of food. In this case, the swim into the ocean was fruitless, and the desperation led the bear to attack a herd of walruses.
7. One of the most severe threats from global warming is catastrophic coastal flooding due to the melting of ice caps. The melting of which ice cap(s) would cause the worst flooding problems?

The Antarctic ice cap holds the vast majority of the water content that is locked in ice, so the melting of this ice cap would significantly add to the world's sea levels. Mountain ice caps, of course, do not hold anywhere near the water content that the polar ice caps do.
8. The Gulf Stream is a flow of warm surface water from the southeast coast of the US towards the British Isles and Scandinavia, keeping the climate of Europe fairly moderate given the continent's latitude. In addition to "The Inconvenient Truth," another book ("The Coming Global Superstorm") and another movie ("The Day after Tomorrow") have indicated dire consequences for Europe if the Gulf Stream is disrupted. Approximately when was the flow of the Gulf Stream last disrupted?

The Gulf Stream, to the best of our knowledge, was last disrupted about 10000 years ago at the end of the most recent ice age. Melting waters from the glaciers that covered North America deposited a large amount of cold freshwater into the North Atlantic Ocean, sending the European back into an ice age for a brief period of time until the Gulf Stream was able to recover.
9. In "The Inconvenient Truth", Mr Gore displays measurements of carbon dioxide content in the atmosphere that go back several hundred millennia. Scientists use which method to take these measurements?

Ice core samples contain minute bubbles of air that contain information about the atmosphere at the time the ice was formed. It is measurements from these air bubbles that indicate that the levels of carbon dioxide that are currently in the atmosphere are unprecedented in the last 600,000 years.
10. According to CNN, the winter of 2006-2007 was the warmest on record in the northern hemisphere. However, persistent northwesterly winds produced record-breaking snowfalls in the northeast US during February 2007, with local measurements exceeding 12 feet! These snowfalls were exacerbated because warm temperatures through mid-January 2007 kept the surface of the Lake Ontario from freezing. Which state in the US bore the brunt of these lake-effect snows?

The state of New York is flanked by Lake Erie to the west and Lake Ontario to the north, so that much of the state is subject to localized lake-effect snows during the winter months. However, lake-effect snows are usually more prevalent earlier in the winter, when the lake surfaces are not yet frozen. With the ongoing climate change, this pattern was changed drastically this past winter.

Thanks so much for taking the quiz!
Source: Author traderider

This quiz was reviewed by FunTrivia editor crisw before going online.
Any errors found in FunTrivia content are routinely corrected through our feedback system.
Most Recent Scores
Jan 11 2023 : Guest 84: 3/10
Dec 18 2022 : frozennugget: 6/10 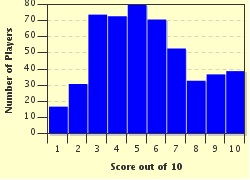 
Other Destinations
Explore Other Quizzes by traderider