Malaria is a serious, sometimes fatal disease caused by a parasite. See how much you know and what you can learn about Malaria!

Quiz Answer Key and Fun Facts
1. There are four kinds of malaria that can infect humans. They are all spread by what?

The mosquito host can't be just 'any' mosquito. It has to be an Anopheles mosquito.
2. What part of the body do these malaria parasites feed on?

Malaria parasites have voracious appetites! In just a few hours, they can suck as much as one quarter of a pound of hemoglobin from the red blood cells of an infected person causing severe anemia!!
3. How long must a malaria parasite grow in its host before infection can be spread to a human being?


Answer: a week or more

When a mosquito bites a malaria infected human, it ingests the malaria parasites found in their blood. If, after a week, the infected mosquito then bites another person, it passes the parasites to the human through its' saliva. Thus a vicious cycle begins.
4. Once malaria parasites enter a person's blood they then travel to which organ?

They travel first to the liver cells where they grow and multiply. From there, they enter the red blood cells.
5. Of the four types of malaria, 'falciparum malaria' is the most deadly. This type of malaria is most prevalent in what place?

90 percent of the world's malaria cases occur in subSarahan Africa!!
6. How many countries and territories worldwide are considered at risk for malarial infections?

More than 40 percent of the world's population is at risk. These countries would include, Central and South America, Haiti and the Dominican Republic, Africa, India, Southeast Asia, the Middle East and Oceania.
7. According to the World Health Organization's estimate in 2000, malaria kills one child how often?

People seem to develop some resistance to malaria after a while, but are never completely immune .
9. Which type of malaria is usually fatal?


Answer: all of them can be fatal

In cerebral malaria, the brain is infected, in severe malaria, the parasitic infection runs out of control and placental malaria is usually fatal for the mother.
10. How soon, after infection, will a person feel usually begin to feel ill?

For most people, symptoms begin 10 days to 4 weeks after infection, although they may exhibit symptoms as early as 8 days or as late as 1 year later!
Source: Author ballykissangel 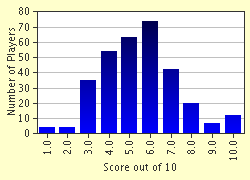 
Other Destinations
Explore Other Quizzes by ballykissangel