10 multiple choice questions about the Boston Red Sox and their history. Some questions are challenging, but a knowledgeable Sox fan will do well!

Share on Facebook
Share on Twitter
Share by E-Mail
Author
turbofx
Time
6 mins
Type
Multiple Choice
Quiz #
70,041
Updated
Dec 03 21
# Qns
10
Difficulty
Difficult
Avg Score
5 / 10
Plays
1905
Awards
Top 35% Quiz
This quiz has 2 formats: you can play it as a or as shown below.
Scroll down to the bottom for the answer key.

Quiz Answer Key and Fun Facts
1. Which Boston player was known as 'The Little Professor'?

Joe D's younger brother Dom was a steady All-Star centerfielder sandwiched between Ted Williams and Doc Cramer.
2. In 1940, owner Tom Yawkey added partitioned-off bullpens to right field. What was this area of Fenway known as?

The bullpens took a 23-foot chunk of field out of play from the original park walls giving Ted Williams more chances to pull the ball for homeruns.
3. This Boston outfielder won 7 Gold Gloves while patroling the outfield at Fenway.

Yaz was awarded 7 Gold Gloves for mastering the Green Monster. Rifle-armed Dwight Evans won 6 playing the sunfield in right.
4. Of these four prominent Boston left-handers, who has won the most games in a Boston uniform?

Mel Parnell won 123 games as a Red Sox pitcher. Grove was credited with 105 victories while in Boston.
5. Who was the last of these four players to have his number number retired at Fenway Park?

Marty set a Major League mark by collecting 24 hits in 14 post-season games in 1986.
7. This pitcher faced Mickey Mantle 63 times in his career and recorded 47 strike outs while allowing only 1 hit to the Yankee slugger. Who was he?

'The Monster' was given his nickname by Mantle after proclaiming that Radatz was a 'monster on the mound'.
8. On the manual scoreboard in left field is inscribed a message in Morse Code. What is it?

Yawkey left his brand on his team in many ways...but his indelible mark of 'TAY-JRY' still shows in left field many years after his death.
9. Which Boston player hit an 8th-inning pinch hit homerun in Game 6 of the 1975 World Series to tie the game against Cinncinnati?

Although everyone remembers one of the greatest homeruns in history hit by Fisk in the 12th inning to win the game, it was Carbo's blast to center field in the 8th inning that kept the Sox in the game.
10. On the last day of the regular season in 1990, this outfielder made a memorable catch to end the game and clinch the American League East title for the 3rd time in 5 years. Who was he?

Bruno's diving grab near the right field stands ended a rocky 9th inning at Fenway and ended the game. The Sox later lost to the Oakland A's in the playoffs.
Source: Author turbofx

This quiz was reviewed by FunTrivia editor Nightmare before going online.
Any errors found in FunTrivia content are routinely corrected through our feedback system.
Most Recent Scores
Jan 16 2023 : Guest 76: 8/10
Dec 05 2022 : Guest 71: 6/10 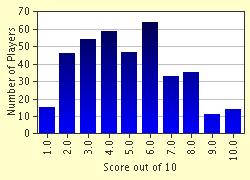 
Other Destinations
Explore Other Quizzes by turbofx