This will test your knowledge of the history of the Boston Red Sox. You don't have to be a diehard fan to take this quiz. Have fun!

Quiz Answer Key and Fun Facts
1. What stadium did the Red Sox call home for the majority of the 20th century?

Fenway Park is famous for its nearly 40-foot tall wall in left field, nicknamed "The Green Monster" for its green color. Although the wall is very high, it is only 310 feet from home plate.
2. Babe Ruth played for the Red Sox from 1914-1919. Which team was he sent to in 1920?

Ruth was sent there a little over a year after leading the Red Sox to a World Series championship in 1918. He supposedly started the "Curse of the Bambino", because it took the Red Sox more than 80 years afterwards to win the World Series again.
3. Which player that played for the Red Sox from 1907-1915 was inducted into the Hall of Fame in 1937?

Speaker retired as the MLB career leader in doubles with 792, and 241 of them came while playing with the Red Sox.
4. How many times in the 1910s did the Red Sox win the World Series?

That year, Lonborg had a 22-9 record and led the American League in wins and games started (39). Lonborg played seven seasons for the Red Sox (1965-1971) before playing a season with the Milwaukee Brewers, and seven seasons with the Philadelphia Phillies (1973-1979) before retiring.
7. The Red Sox are often remembered for winning game 6 of the 1975 World Series with a walk-off home run in the bottom of the 12th inning. But do you know what player hit that home run?

The Red Sox were playing the Cincinnati Reds in that World Series. Fisk hit a deep fly ball that hit the left field foul pole next to the Green Monster. The Reds went on to win game 7 and the World Series.
8. Which Red Sox player let a ground ball roll through his legs, which eventually led to the Red Sox losing the 1986 World Series?

The Red Sox were playing the New York Mets in the World Series. There were two outs in the bottom of the tenth inning in game 6. If Buckner had taken the ground ball at first base and touched first, it would have ended the inning and extended the game. However, since he let the ball roll through his legs, the Mets scored the winning run, and won the series in game 7 two days later.
9. Which Red Sox player that they acquired in 2003, was often referred to by his nickname "Big Papi"?

Before going to the Red Sox, Ortiz played for the Minnesota Twins from 1997-2002. He signed as a free agent with the Red Sox in 2003, and the next year, helped the Red Sox to the World Series title.
10. When the Red Sox won the 2004 World Series, how many years had it been since they had won their previous championship?

In the American League Championship Series, the Red Sox became the first team in baseball history to come back from a 3 games to none deficit and still win the series. This title ended the "Curse of the Bambino", the supposed "curse" that began when Babe Ruth left the Red Sox.
Source: Author jj137 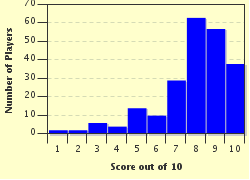 
Other Destinations
Explore Other Quizzes by jj137