Quiz Answer Key and Fun Facts
1. Which of the following coaches managed teams wearing a Red Sox and a New York Yankees uniform?

He led the Yankees to 2 World Series titles. Although Zimmer coached for both teams, he's never managed the Yankees!
2. Of these four mound mealtickets, which one compiled the best ERA during their playing days in Boston??

Joe Wood had a career 1.99 ERA with Boston before injury cut his career short. Cy Young is a VERY close second with an ERA of 2.00!
3. Which sure-handed third baseman was awarded 3 Gold Gloves for his prowness at the hot corner?

Malzone snagged the award in '57, '58 and '59. Boggs was given the award twice, both as a Yankee!
4. Which pitcher served up the infamous Bucky Dent gopher ball in the 1978 one-game playoff?

Interestingly enough, Bill Lee claims to this day that Mike Torrez (previously with the Yankees the year before) gave up the homerun on purpose!
5. Which of these Sox Hall-of-Famers won the most league MVP awards in their career?

Foxx was named MVP three times in his career, twice while a member of the Philadelphia A's.
6. What colorful Sox played while battling mental illness?

You can read all about it in his autobiography. Although Lyons was a clown on the field, there is no medical evidence to suggest he is crazy!
7. Fenway Park officially opened its gates on Opening Day, 1912. What other historic park was commissioned on the same day in 1912??

The old park with the infamous right field overhang opened an hour apart from Fenway on Opening Day in 1912!
8. Ichiro Suzuki of the Seattle Mariners won both the A.L. Rookie of the Year and MVP Awards in 2001, becoming the second player to achieve that feat. The first to do it was a Red Sox player: who was it?

It had to be one of the 'Gold Dust Twins'... Lynn was given both honors in his rookie season.
9. Which of these four Red Sox legends has played the most games in a Red Sox uniform?

Over the course of 23 seasons, Yaz racked up the most playing time in 3308 games. He is second only to Pete Rose in all-time games played.
10. In 2001, Manny Ramirez tied for 4th place in the American league in homeruns with 41 round-trippers. But who was the last Red Sox slugger to lead the Major Leagues in home runs?

Armas pounded out 43 dingers back in 1984.
Source: Author Turbofx 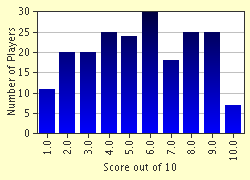 
Other Destinations
Explore Other Quizzes by Turbofx