Sir Don Bradman wanted his list of XI to be announced only after his death simply because he couldn't handle (or didn't wish to) the mail that would have followed. A tribute to the men chosen by the greatest batsman of all time to be in his team!

Share on Facebook
Share on Twitter
Share by E-Mail
Author
ace_sodium
Time
5 mins
Type
Multiple Choice
Quiz #
108,356
Updated
Dec 03 21
# Qns
10
Difficulty
Average
Avg Score
7 / 10
Plays
757
This quiz has 2 formats: you can play it as a or as shown below.
Scroll down to the bottom for the answer key.

Quiz Answer Key and Fun Facts
1. "He was a bowler, one felt, by metier, as some are locksmiths or boot-makers or violinists." - Alan Ross. Unique in every sense, he was England's leading bowler during his time. A career spanning 9 years, he would have made debut much earlier had it not been for the Second World War. During the war, he and his brother served in the RAF. He was knighted in 1996 for his services.

He made his debut against India in 1946 and played his last test against South Africa in 1955. He took a total of 236 wickets in 51 matches at an average of 24.89.
2. Hailing from India, he was rated by Wisden as the second one-day batsman ever and the second best test batsman ever. His records are phenomenal; in tests he has more centuries than Sir Don. He made his debut at the age of 16 against Pakistan in Pakistan. Well, one doesn't need any more clues to guess this player.

Sachin Tendulkar is the only player who was playing at the time the list was made public by Roland Perry. Bradman considered closest to him with respect to style and strokeplay. Sachin was captain of India but was unsuccessful. He resigned from captaincy twice.
3. "Wisden Cricketer of the Year" in 1949, he was less stylish than the other batsmen during his time. However, the greatest batsman of all time saw in him a remarkable talent to the extent that he chose him to open in his dream team. Hailing from Australia, he played his first match against England at Brisbane (1st test) in 1946.

Arthur Robert Morris scored a total of 3533 runs in 46 tests at an average of 46.48 runs per innings. His "Chinaman" got him 2 wickets in test cricket.
4. His test average was second only to Don Bradman, he lost out due to the Apartheid policy of the South African government. He played in only 4 tests - all against Australia. In those four tests, he had 2 centuries and 2 half centuries. He opened with another great batsman Gordon Greenidge for Hampshire at a time. Queensland also owes him one!

Barry Anderson Richards played for Natal, Gloucestershire, Hampshire, South Australia, Transvaal, South Africa. He was the Chief Executive of Queensland when it won its first Sheffield Shield title.
5. A great wrist spinner, Bradman preferred him over present greats like Warne etc. He was the fastest to 200 wickets and had the same fate as most Australian cricketers - dropped (on account of age) even though he was doing exceptionally well.

To quote O'Reilly, "Grimmett never insisted on spin as his chief means of destruction. To him it was no more than an important adjunct to unerring length and direction... Grimmett was perhaps the best and most consistently active cricket thinker I ever met". Grimmett took 216 wickets in just 37 tests. Useless piece of Information - he always bowled with his cap on.

His favourite was the Flipper (does it show something about the Aussie psyche?).
6. Everyone's favourite trivia question - Which batsman is notorious for batting with an aluminum bat? Well, he wasn't a batsman exactly, the English batsmen will vouch for that. An impressive career, he was also named in Australia's test team of the century!

After the umpires persuaded (too mild a word?) him to change the bat, he threw the bat in disgust- makes excellent viewing on "the gentleman's game". Nevertheless his record with the ball was impressive, to say the least. 355 test wickets in 70 tests and 103 ODI wickets in 63 matches.
7. God gave him an extra-finger on each hand (removed at birth). Maybe a sign of things to come! Excelled in all departments of the game - he was a team by himself. Considered the greatest all-rounder of all time, he shares the record of hitting 6 sixes in an over (first - class match). Who is he?

Gary St Auburn Sobers wasn't just good at cricket - he played golf, soccer and basketball for soccer for Barbados. Wrist spin, medium fast bowling, amazing fielder, excellent batsman - what more could a captain ask for? He was knighted for his services to the game in 1975.
8. He started off as a batsman, soon turned into a fearsome fast bowler. A test career that lasted 13 years, he was, at worst, an excellent bowler. 228 wickets from 61 test matches and 2 test centuries is no mean feat for a player selected to bat after the wicketkeeper (or at the start of the tail!). If you need any more clues, he is an Aussie...

"Ray Lindwall bowling at an Indian in a Test match. When he saw the batsman backing away before the delivery of the ball Lindwall is said to have remarked to the non-striker: "Why is he running away? I don't have to hit him to hit the stumps."- Ragunath Rau (www.cricketnext.com). Just a doubt - does it show anything more the Indian psyche?
9. The wicketkeeper in Bradman's XI. He represented Queensland and Australia.

I must confess, I know very little of him. For the stats guy, Tallon took 50 catches and 8 stumpings' in 21 matches (26 innings) and had 2 half-centuries.
10. One more Leg-spinner, he took 144 wickets in 27 tests for Australia. After his retirement, he became a cricket correspondent (he worked with Sydney Morning Herald). He was chosen in the Australian test team of the century and was one of the first to be inducted into the Australian Cricket Hall of Fame.

The last man in the team was a batsman by the name of Donald Bradman and by the way the 12th man in this team is not Jonty Rhodes but Wally Hammond.
Source: Author ace_sodium

This quiz was reviewed by FunTrivia editor Dalgleish before going online.
Any errors found in FunTrivia content are routinely corrected through our feedback system.
Most Recent Scores
Jan 24 2023 : Guest 1: 7/10
Jan 21 2023 : ozzz2002: 5/10 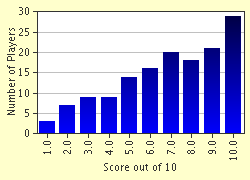