This quiz takes a look at some of the winners of the World Snooker Championship since 1969 as well as a few other notable figures from the competition. Enjoy!

Quiz Answer Key and Fun Facts
1. As every decade passes, so too does the individual dominance of the World Snooker Championship pass from one person to the next. The 2000s provided one player, known as much for his off-table exploits as for his skill on it, with three titles. Who "rocketed" to success with wins in 2001, 2004 and 2008?

Ronnie "The Rocket" O'Sullivan was undoubtedly a great snooker player, but despite his talent, he had a love-hate relationship with the sport. He criticised the supposedly declining standing of the table game within a wider sporting context as well as snooker's lack of entertainment value which made the game a hard sell to a generation spoilt for choice when it came to following sport.

After winning three World Championships (2001, 2004 and 2008) he considered early retirement on quite a few occasions, citing his displeasure and boredom as contributory factors. He did, however, decide to continue competing at the highest level, and he was rewarded with further Championship victories in 2012 and 2013. When O'Sullivan defeated Barry Hawkins in the 2013 final, he became only the fourth player since the dawn of the modern era in 1969 to win five World Championships.
2. The year 1969 brought in snooker's "modern era" characterised by the World Snooker Championship becoming a single-elimination tournament, or knock-out. The very first winner in this new era was known for his frequent sniffing but more significantly for also winning the very first Championship held at the Crucible Theatre, Sheffield. Who was this three-times World Championship winner?

John Spencer, from the northern English county of Lancashire, was crowned champion at snooker's biggest event on three separate occasions (1969, 1971 and 1977). Apart from the distinctions already mentioned (being the first modern era World Championship winner and the first winner of the event at the Crucible), Spencer was known for winning the tournament at his very first attempt; such a feat having not been seen since Joe Davis in the earlier and far less competitive days of the competition. In fact, it is arguable that John Spencer holds the distinction of being the first person to "non-trivially" win the title at the first time of asking considering that when Joe Davis accomplished this in 1927, it was at the inaugural tournament!
3. The World Snooker Championships of the 1990s saw Scotland take centre stage with not only John Higgins winning in 1998 but Stephen Hendry winning seven times, a modern era record. Who did Stephen Hendry face in the final of the World Championships of 1990, 1992, 1993, and 1994?

Hendry won his seventh title in 1999 but as the calendar ticked over into the 2000s, the Scotsman lost his winning edge; he reached only one further final at the Crucible Theatre, when he played Peter Ebdon in 2002. On this occasion Ebdon inflicted the same scoreline upon Hendry as Hendry had to Jimmy White in 1994; the Scotsman was beatable, even if only by a single frame.
4. Ray Reardon was not just a great snooker player, he was also a rather comical character. His Gothic appearance made him instantly recognisable and also gave rise to his nickname. By which of the following nicknames was Reardon affectionately known?

Despite resembling Bela Lugosi's representation of "Dracula" in very many ways, right down to the widow's peak, Reardon was actually a very nice man; his table-side mannerisms amused audiences and his shot-making prowess enthralled them. Born in Tredegar, a town at the head of the Welsh valleys, Reardon cut his teeth in various snooker halls across south Wales, but before long, his abilities had extracted him from the industrial heartlands of his home nation, and took him to the industrial cities in central and northern England.

In 1978, Reardon won the last of his six World Snooker Championships; this being his only such title won at the Crucible, Sheffield.
5. Dennis Taylor won the Snooker World Championship just once (1985), but the win is one of the most dramatic in the history of the sport. Just as well-known however his iconic sense of style. Which of the following was Dennis Taylor's trademark?

Even though this question may give over the impression of utter triviality, Dennis Taylor's "upside down" glasses were an iconic feature of world snooker in the 1980s. The design of the spectacles had a valid purpose, stopping him from peering over his lenses when crouching down to make a play; this didn't stop them, and him, from looking peculiar though! Issues regarding his vision correction aside, Dennis Taylor did Northern Ireland proud when in 1985 he defeated Steve Davis, snooker heavyweight and multiple World Championship winner, to take his first and only Crucible title. Describing the match will do it no justice at all, but for those who saw the match live, or have seen it repeated since, any mention of the final black ball of the final frame will bring images to mind that are very unlikely to be forgotten.
6. Despite the massive success that some players achieve in the sport of snooker, there are those, such as Alex Higgins, who struggle with personal issues. Higgins won the World Snooker Championship in 1972, but did he go on to win the tournament again?

Alex Higgins was an excellent snooker player but he was a deeply troubled man. Those troubles affected his ability at the snooker table, a fact that makes his two World Snooker Championship titles all the more impressive. Snooker is a single-player sport and, much like soccer officiating, if you are having a bad day you cannot be substituted; your floundering performance is there for everybody to see and for all to endure. Alex Higgins, one of many top class players from Northern Ireland, struggled with an addictive personality; he indulged in a toxic trio of heavy smoking, heavy drinking and persistent gambling. All humans have their vices but for Alex Higgins, he had just one too many; the man who won two World Snooker Championships (1972 and 1982) died of throat cancer at the age of 66. Higgins lived his life on his own terms and enthralled snooker fans along the way.
7. Due to the rather placid nature of snooker, the sport has needed charismatic players to maintain the public's interest. Arguably the best player in the 1980s was not of this sort; he was a very focused man, some would even say boring. Which of the following players won six World Snooker Championship titles in the 1980s?

Snooker has had its Ray Reardons and its John Virgos but it has also had the likes of Steve Davis. Don't get me wrong, the snooker world would never trade this outstanding player for a perceived lack of character, but a lack of character when at the table he certainly had.

This goes to show that whilst sports are about entertainment, sometimes it is for the best that the sport itself takes centre stage; Steve Davis was a master at that. His determination and focus, whilst not enamouring him to the crowd, created a player of such brilliance that he will long be considered one of the sport's all-time greats. If you'd ask Steve Davis whether he would trade in his six World Snooker Championship titles (1981, 1983, 1984, 1987, 1988 and 1989) for better crowd-pleasing attributes, then I am sure the answer from the "Romford Slim" would be no, and rightly so.
8. Over the decades, snooker has very much been a British-oriented sport, but players like Neil Robertson have tried to change that. From which of the following countries did Neil Robertson hail?

Before Neil Robertson, Australian interests in the sport of snooker were essentially not catered for, at least since the days of Eddie Charlton. Melbourne-born Robertson, nicknamed the "Thunder from Down Under", first showed his title-winning capabilities in the 2006/07 season, when he won two ranking tournaments: the Welsh Open and the World Open.

Englishman Peter Ebdon, born in London in 1970, is one of those people who immediately springs to mind when one thinks of snooker players who take things at a leisurely pace. Some of the sport's commentators, as well as some of his contemporary players, suggested that his painfully slow decision making was nothing more than gamesmanship. Ebdon denied all such claims and, in his defence, it must be mentioned that he was always on the slow side; this indicates that it may just have been his style, his way of coping with the pressures of professional sport. Imagine the reaction then, when the final of the 2006 World Snooker Championship turned out to feature Peter Ebdon and another chronically slow player, Graeme Dott! Their match took so long to complete that by the time Graeme Dott claimed his 18th and Championship winning frame, the time was 00:52; this broke the record for the latest finish to a Crucible final.

This was Graeme Dott's first ever win at the competition but as a consolation to the runner-up, Peter Ebdon, his place in snooker history was already solidified when he won the event back in 2002.
10. The success of the World Snooker Championship depends upon more than just the players. In what role was Dutchman, Jan Verhaas, regularly seen?

Jan Verhaas was a well-known referee, a man who towered over the table yet controlled the spectators in a gentle and respectful manner. His efficiency and good judgement saw him rise to the top of his profession, making his first appearance in the the final of the World Snooker Championship in 2003, aged just 37.

He then remained at the peak of snooker refereeing for over a decade, refereeing further World Championship finals in 2006, 2008, 2011 and 2013. Along with Michaela Tabb, who refereed the 2009 and 2012 finals, Verhaas was the face of snooker officiating in this period.
Source: Author jonnowales 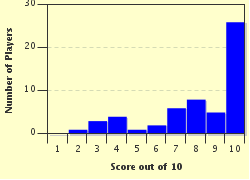 Go to Snooker and Pool Quizzes