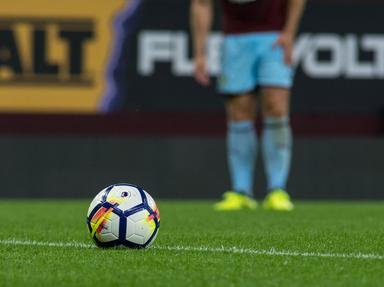 Norwich City finished bottom of the league and were relegated to the Championship along with Watford and Bournemouth. They bounced straight back the following season, as well as Watford.
2. Which club finished top of the Premiership in the 2019-20 season?

Liverpool finished as Champions ahead of Manchester City who trailed them by 18 points. This was Liverpool's first Premiership title; their last League title was in 1989-90. Their manager, Jürgen Klopp, was also named Premier League Manager of the Season.
3. Who was the top scorer in the 2019-20 EPL season?

The Leicester City striker Jamie Vardy won the Golden Boot with a total of 23 premiership goals beating out both Pierre-Emerick Aubameyang (Arsenal) and Danny Ings (Southampton) who finished with 22 goals. Vardy, at 33 years old, was the oldest player to win the award.
4. Manchester United signed Cristiano Ronaldo from which club at the start of the 2021-22 season?

Ronaldo first played for Manchester United in 2003 when he was signed from Sporting CP and later moved to Real Madrid in 2009. He signed a four-year deal with Juventus in 2018 after contract negotiations with Real Madrid came to a halt. He started the 2021-22 season on the bench and was wanting to leave Juventus. On 27th August 2021 he reached amicable contract terms with Manchester United, after Manchester City had pulled out of talks and made his second debut on 11th September, scoring twice in the 4-1 win over Newcastle United.
5. Which club had the lowest ground capacity at the start of the 2021-22 EPL season?

In October 2019, Southampton were beaten at home 9-0 by Leicester City, their worst defeat in the history of the club. (Vardy and Pérez both scoring hat tricks). Unfortunately for Southampton, this was followed in February 2021 by their worst away defeat at the hands of Manchester United. In both games Southampton had players sent off for red card offences.
7. The 2020-21 season saw the most hat-tricks scored in the Premiership since its inception in 1992.

Harry Kane, the Tottenham Hotspur and England striker won the Golden Boot award with a total of 23 Premiership goals. He was followed by Mohamed Salah (Liverpool) with 22 and Bruno Fernandes (Manchester United) with 18 goals.
9. Which player scored a hat-trick on the opening weekend of the 2019-20 season?

On 10th August 2019, Raheem Sterling of Manchester City scored the first hat-trick of the season in the 5-0 away win over West Ham United at the London Stadium. He scored another on the 11th July 2020 in their 5-0 away win at Brighton & Hove Albion.
10. Which Manchester United player score a hat-trick on the opening weekend in the 2021-22 season?

Bruno Fernandes started off the 2021-22 season with a hat-trick on 14th August 2021, in Manchester United's 5-1 home win against Leeds United. A near capacity crowd of 72,732 saw a dominating performance by The Red Devils.
Source: Author bwfc10


Other Destinations
Explore Other Quizzes by bwfc10